by Gerrico Adaya from San Diego, California in United States

Success is not final, failure is not fatal: it is the courage to continue that counts. 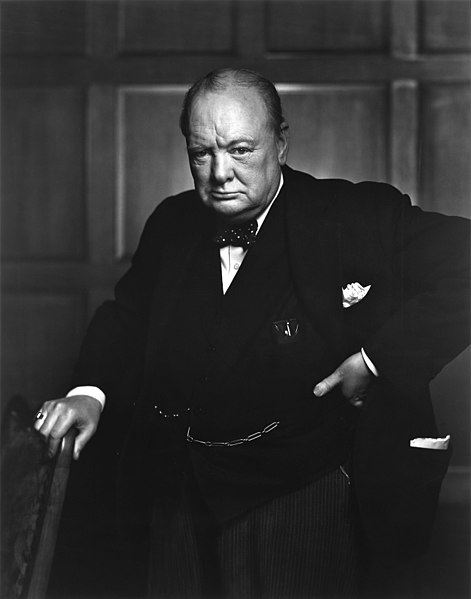 WikimediaBiblioArchives / LibraryArchives [Public domain]To the dismay of the British populace, World War II arrived in 1939, and with it came a storm of fear and suffering. Winston Churchill was a leader who inspired Britain in those dark times and fought to victory. Churchill was born in 1874 in Oxfordshire, England and took his first step in politics in 1901 as a part of Parliament (Forster). His series of strategic failures haunted his career, making him step in and out of political and military affairs. He finally rose to the occasion when Chamberlain declared war on Germany and later resigned. His contributions of strategy and inspiring leadership lead the resistance to victory in 1945. A sign of righteousness gleamed when, even in the darkest of moments, he refused to yield to Nazi Germany. Beyond the point of retirement, Churchill was still hard at work in the government. Winston Churchill’s righteous ideals against Germany, and his persistent hard work in British politics and war, rallied the English population towards victory in World War II and ultimately made him a hero.

Despite the constant pressure to give in to Germany, Churchill stayed true to his ideals of virtue. Churchill was an advocate of justice, opposing the Prime Minister’s submission: “Between 1933 and 1939, Churchill pushed for anti-Nazi policies. When Prime Minister Chamberlain went to Germany to try and appease Hitler, Churchill was outraged” (Forster). There was a stark contrast between Chamberlain and Churchill’s initiative towards Hitler. Instead of hoping for Germany to spare their home, Churchill believed in ending his reign altogether. Churchill’s revolt against Parliament's strengthened after the Munich Agreement in 1938:

He denounced Prime Minister Neville Chamberlain's Munich Agreement which attempted to avert war with Germany by giving up a portion of Czechoslovakia. Churchill questioned the belief that British security could be achieved ‘by throwing a small state to the wolves’ and called the agreement ‘a total and unmitigated defeat’. (“Winston Churchill.” Contemporary Heroes and Heroines)

The consideration of sacrificing Czechoslovakia for the sake of avoiding war was immoral and cowardly. Rather than surrendering to Germany, Churchill would soon become a major influence in the conflict against them. He is deserving of being a hero because he chose to do the right thing in the face of a powerful force. When the government wasn’t willing to confront Germany, Winston Churchill was the one who rose to the occasion and stuck with his righteous beliefs.

Through thick and thin, Churchill continued to persevere in helping the government. After Chamberlain resigned and Churchill succeeded as Prime Minister in 1940 “he offered them nothing ‘but blood, toil, tears, and sweat.’ During the next five years, Churchill went forward with courage, hope, and determination while supervising every aspect of the war effort” (“Winston Churchill.” Contemporary Heroes and Heroines). The speech in the House of Commons and his achievements proves of his hard work and dedication. Churchill went above and beyond in order to accomplish what he set out to do. Even after he succeeded in the war, Churchill never ceased working for the betterment of Britain: “Ageing and increasingly unwell, he often conducted business from his bedside, and while his powerful personality and oratory ability endured,” (“Past Prime Ministers”). Winston Churchill was hard working until the day he died. Unlike the common man, Churchill refused to retire and exerted himself to continue his duties. His heroism shined when his spirit and ambitions fueled him to contribute more than necessary.

Winston Churchill’s inspiring leadership and accomplishments during his political career proves himself worthy to be considered a hero. He made an effort to do the right thing, even if it seemed implausible at the time. His unwavering will to contribute to his country molded him into the savior of Britain. World War II brought to light his finest hour as “some of his most memorable speeches were given in this period, and are credited with stimulating British morale during periods of great hardship” (“Past Prime Ministers”). Churchill inspires us because, in one of the darkest periods of history, he never stopped serving his country and believing in virtue. The righteousness and hard work of Winston Churchill in World War II and politics proves his worth as a hero of Britain.