With Turkey on edge, a look to architecture to bridge divides

How societies fill public spaces is often political, if not partisan. All the more so in Istanbul's Taksim Square, where a vast new mosque and a reconstructed cultural center are in seeming competition.

MARCH 22, 2019 - ISTANBUL - For decades, the Atatürk Cultural Center had been an architectural icon. 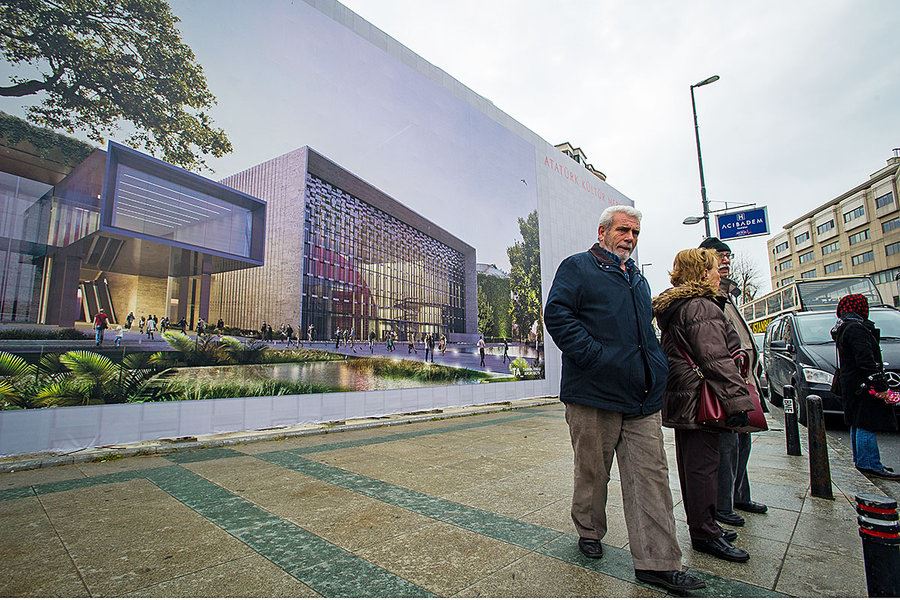 Architectural renditions of the new Ataturk Cultural Center line the sidewalks around the Taksim Square construction site on Feb. 27 in Istanbul. First build in 1969 with a modernist design meant to serve as the face of a new, secular nation, the center was closed in 2008 for renovation.Scott Peterson/Getty Images/The Christian Science MonitorIt stood in one of Turkey’s most dynamic political spaces, Istanbul’s Taksim Square, the scene of countless confrontations, many violent, between protesters and police.

A bastion of arts and culture with a bold facade of metal cladding, the Cultural Center, or AKM, was built in the late 1960s to show the modern face of a new, secular nation envisioned by its revered founder, Mustafa Kamal Atatürk.

But by 2013, at the peak of Turkey’s anti-government Gezi Park protests, the disused, ghost shell of a building had already been closed for years.

When one Turkish artist ventured inside back then, she did not know what to expect. She remembered as a teenager going every Saturday for morning classes, and for exhibitions and concerts. She found windows long broken and banners strung from the roof by protesters occupying the square and adjacent Gezi Park.

“It was just a shock, because people were waiting for it to be renovated and there was nothing done,” recalls the artist, who asked not to be named due to the sensitivity of the issue. “I was shocked that it was empty already, because I saw it when it was full. It’s like seeing the Titanic after it sinks.”

Today the AKM has been leveled and is finally being rebuilt, though in the midst of a hypercharged, divisive political atmosphere. Even municipal elections on March 31 have been branded by President Recep Tayyip Erdoğan and the ruling, Islam-oriented Justice and Development Party (AKP) as a matter of national “survival.”

The optics on Taksim Square certainly appear to reflect Turkey’s deep social fracture: As work begins on the new AKM, on the opposite side of the square a vast new mosque that will one day house 2,500 worshippers is well on its way to completion, a project long promised by the AKP to its devout supporters.

That symbolism makes many secular Turks angry, convinced that removal of the AKM is part of a broader attempt to minimize Atatürk’s legacy while – through the new mosque – boosting that of Mr. Erdoğan. Yet that public perception, and the underlying social tension, also has all sides pushing for a project that achieves a balance.

“The squares are important for governments; they use them to build their ideology and strategy,” says the artist, adding that it is “very normal” that the AKM was built by a staunchly secular government, and the mosque by the AKP, which has ruled Turkey since 2002.

“The AKM symbolizes culture in Turkey, and it being demolished means the culture is demolished, the arts, the way that we know it, [and] that there may be another way of arts coming around,” she says.

But the architects of the new AKM, led by Murat Tabanlıoğlu, the son of the original architect, could not be more aware of the need to preserve the center’s legacy for the future – and the need to bridge social divides in Turkey. They envision a multifunctional opera house complex that seats 2,350 people, in addition to an 800-seat theater hall, a conference hall for 1,000 people, and numerous other theater, cinema, and gallery spaces.

The massive cultural center – a $162 million project, at current prices, funded by the Ministry of Culture – will be the largest of its kind approved by the AKP government, which has focused most previous cultural efforts on throwbacks to the Ottoman era. Mr. Erdoğan personally called the architects, they say, to request they take on this project.

The new AKM will incorporate the signature metal cladding, as before, but also be largely transparent with glass walls to ensure that cultural events are “at the same time connected to the street” and therefore shared, says Melkan Gürsel, a partner of Tabanlıoğlu Architects. Inside, the opera house will be situated inside a vast orb covered with red tiles.

“It should create a synergy, and sometimes when you are looking from outside, next day you will say, ‘Let’s go there and be inside, and be a part of it,’” says Ms. Gürsel, whose firm has designed a host of specialized projects globally.

“I think those things are bringing more people together. It breaks the walls between social differences,” she says. “And you are on Taksim Square, if you are making a cultural building, you should make a statement. It should say to everyone, ‘Come and be together.’”

That is a “big” message for Turkey, she says, “because in our country we need that kind of message, because there are many different kinds of people, many different mentalities. But we are living in one country ... under one flag.”

Controversial from the start

Taksim Square has always been a political space, with critical events such as the killing of 36 demonstrators in 1977, frequent May Day clashes with police, and even a Kurdish suicide bombing in 2010 that wounded more than 30 people.

In keeping with that high profile, the AKM rebuild has been political and controversial from the start, not least because of delays due to its role during the Gezi protests. Demonstrators gathering on the AKM roof would simultaneously light flares, and their many banners created a wall of angry messages. When police recaptured the building, their first act was to hang Turkish flags and a portrait of Atatürk.

So rumors abounded that the ruling party wanted to bulldoze it to make way for yet another mall, in a bid to erase Atatürk’s secular legacy.

Indeed, on the eve of the demolition last year, a group of anonymous guerrilla artists beamed lasers into the AKM to spell the words Art Niyet. The translation means “plan for art,” but the term is a double-entendre with a second meaning: “concealed plan.”

Mr. Erdoğan underscored the controversy in February at the groundbreaking ceremony, using his typical “us-versus-them” rhetoric that analysts say has for years done much to exacerbate Turkey’s social chasm.

“Those who saw the old building as the center of their ideology tried to block this [new AKM] project. They tried to sabotage the project with protests in the streets,” Mr. Erdoğan said, as large banners of the president and Atatürk hung side by side.

Those against the project “are not acting out of sensitivity to culture and art, but out of ideological bigotry,” the president said. They are the ones, he charged, who during the Gezi protests “turned [the AKM] into a tool to assault our democracy, loot the property of our shopkeepers, and tear apart our streets.”

After the ceremony, Mr. Erdoğan crossed Taksim Square to visit the mosque site, eat roasted chestnuts, and talk with workers. One local official noted last November that the scale of the mosque “impresses you as an architectural wonder.”

Former AKP Prime Minister Binali Yıldırım, who is a candidate for Istanbul mayor, took a more inclusive tone at the groundbreaking event.

“Istanbul is not a city where anyone is going to dominate anyone else,” said Mr. Yıldırım. “Here, [our] differences live in harmony with one another.... We will continue, as we have in the past, to sit side by side to talk out our issues with one another, without fighting. For the city belongs to all of us.”

Amid the controversy, the challenge to rebuild this part of Turkey’s modern heritage will be to keep politics at a distance, say the architects.

“Sometimes what you are doing is more important than political conversations,” says Ms. Gürsel. “Everywhere, not only in Turkey, there are a lot of different ideas. But we should learn to live with these different ideas.”

Architecture plays a pivotal role “because it changes something,” she says.

“These are social sculptures, we should feel something inside,” says Ms. Gürsel. The AKM will “affect the city in a very good way, because one day we will forget all the negotiations, all the problems, all the desperations, and we will listen – all together – to some concert, which is very unique.”