by Carolyn Espinosa from San Diego, California in United States

“A man fighting for his life can do more than he ever imagined he could.”
― Witold Pilecki, The Auschwitz Volunteer: Beyond Bravery 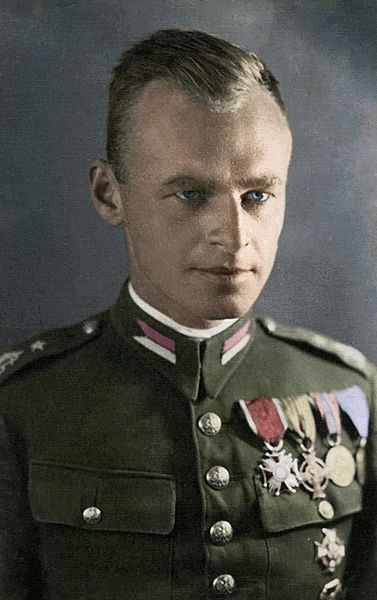 Being a hero during World War II meant much more than bravery; it meant exceeding expectation by risking life and limb. A Polish citizen, Witold Pilecki, valued just that, as what he stood for and wanted to protect was more powerful and precious than just his one life. Pilecki was born on May 13, 1901, in Olonets, Russia, to a Polish family with a strongly rooted Pole identity who held opposing political views to the tsarist Russia (Lyons). Growing up, he was always prioritizing his family ideals by first serving as a scout during World War I then fighting with the Polish Army during the Polish-Soviet War of 1919-21. Later, he became a part of the Association for the Nation's Security to start officer training courses. In 1926, his drive to fight never stopped, as he became a reserve second lieutenant in the 26th Greater Poland Uhlan Regiment (“Witold Pilecki”).  In 1940, Pilecki willingly got himself arrested to uncover Nazi secrets and shed light on what was going on in the concentration camp, Auschwitz (Bethune). He never doubted what he believed in or where to put his loyalty which resulted in an everlasting determination, to always keep him going. Likewise, his exhibition of selflessness to sacrifice his own life for the greater good showed his pure heart. Witold Pilecki’s actions appeared impossible and insane to many, but the depth of them reaches into his selfless character and determination, revealing his heroic spirit.

Witold Pilecki persistently was on a mission for Poland, creating a drive of determination within him to fuel his actions. Starting at a young age, he grew up to prioritize work for his homeland and committed his life in service no matter the circumstance: “I started working socially on March 3, 1914 [Pilecki was 13], when I joined the underground Polish Scouting Association in Vilnius. After I left for Russia, I was still studying in a commercial school and I created the first scout game in Orle Orłowska district, where I worked in 1916, 17 and 18. - In August 1918 [Pilecki was 17], we returned… to Vilnius...I report to work in Zw. Harc. Engelsk. and, I belong to the underground Polish Military Organization. Because my father did not come back from Russia, the obligation for the family to survive fell on me” (Pilecki and CAW AP 2844). Witold Pilecki was always a dedicated Pole, even as boy entering his teenage years he set himself as a defender of Poland. This was alongside the burden of school and the weight of his family on his shoulders, his connection to Poland was too strong to ignore. Some might have sacrificed their beliefs to avoid their workload but Pilecki always took the high road and did more than was expected of him. He demonstrated a determined spirit with no obstacle being too big to knock down, if something was important to him, it would be maintained. Witold Pilecki continued to never back down in the name of Poland and went onto volunteer two years of his life at a concentration camp to uncover secrets of their enemy: “At Auschwitz, Pilecki endured crippling work details and illness while organizing a secret group known as the Union of Military Organizations (Polish acronym ZOW) that worked to improve inmate morale, provide news from outside, distribute surplus food and clothing, gather intelligence and train men to seize the camp in the event of a relief attack. ZOW and Pilecki also smuggled out reports of camp atrocities and, later, the camp's gas chambers. These reports were a principal source of intelligence on Nazi war crimes for the Western Allies” (Lyons). Pilecki stood up for his country, even when he was not asked as his only commandment was to serve his homeland. He showed us this by enduring horrid scenes, living in unhygienic conditions, and putting up with abuse. He still managed to push through and complete his ultimate mission, using his passion as drive. His circumstances never slowed him down but only created new opportunities and unexpected ways for providing service to his country. Ultimately, Witold Pilecki demonstrated the power of determination by becoming a sledgehammer to any boulder that came between him and Poland. 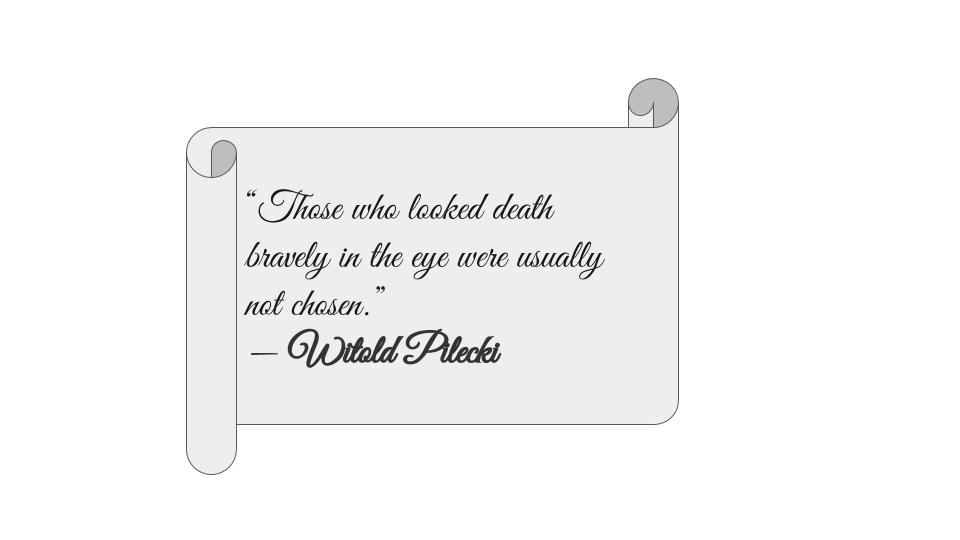 Witold Pilecki constantly valued the greater good and saw that one must be able to make sacrifices for the better of society. As the Nazis took over Poland during World War II, many mysterious changes were happening, and with Poland only allowed to watch from a distance, it inspired him to intervene: “In 1940, as the London-based Polish government-in-exile puzzled over what might be going on in the still little-known camp the Nazis had set up in Auschwitz, Pilecki--then 39 and a founder of the Polish Resistance--volunteered to find out. On Sept. 19, he deliberately wandered into the middle of an SS street roundup of military-aged Poles, and soon learned” (Bethune). Pilecki deliberately made himself a pawn in a much larger game, without a trace of thought for his own well-being. Once his country became curious of atrocities the Nazis were committing, he threw himself in its midst guided by his morals that he was doing the right thing. His actions revealed his selfless heart as he put himself in prison and faced horrors far beyond what people in the real would consider dangerous. He knew his country was falling apart and his life was but a small sacrifice if the information he uncovered helped the Polish gov’t in the long run. Pilecki lived two years at the concentration camp smuggling out reports and helping other inmates. During this time he experienced extreme cruelty suffered by innocents: “The camp was a gauge, which tested human characters. Some of us slide into a moral sewer. Others got their characters cut like crystal. We were cut by sharp tools. Blows painfully cut into our bodies, but in our souls they found a field to be ploughed” (Pilecki). Pilecki reveals how inmates including himself had to go through a transformation of spirit to withstand the urge to kill themselves and not give into self destruction. The guards at these camps had no sympathy for the well-being of those they considered inferior, which left the prisoners very vulnerable and increased their suffering. Pilecki sacrificed a part of his life to pure torture, just to gain information for his country. This shows us the depth, strength and indestructibility of his spirit to benefit greater good. Witold Pilecki revealed that no price was too high to pay if it meant the rest of society would be at peace, even if it was the sacrifice of his own welfare. 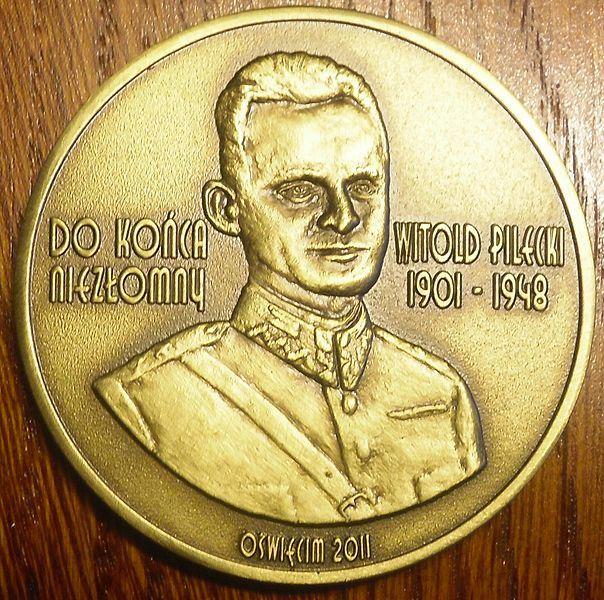 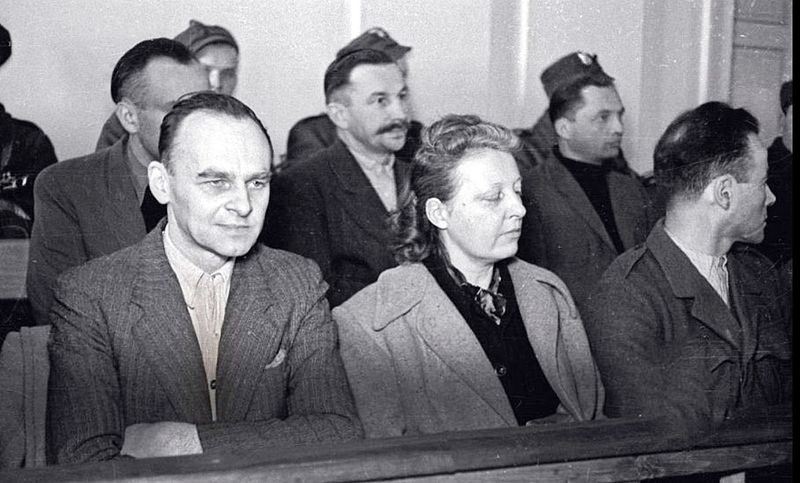 Witold Pilecki during his show trial where he was sentenced to death, taken by a Communist in 1948. https://commons.wikimedia.org/wiki/File:Witold_Pilecki_%C5%82awa_oskar%C5%BConych_1948.jpgunknown-anonymous [Public domain]

A true hero is one with the continuous strength to fight and stand for the good of society even if it meant placing the needs of oneself second, as demonstrated by Witold Pilecki. The Polish citizen, Witold Pilecki, constantly felt like he was rooted eternally to the heart of Poland and it obligated him to show gratitude through service. There was no force telling him how to live, it was his own will and determination that guided him to this path. The values he lived by often came at a high price for maintenance, but the profit was always for the greater good. His spirit reveals a hero with a selfless heart and a never-ending drive to serve. Witold Pilecki after two years at Auschwitz managed to escape but immediately got back into the scheme of things with the Resistance and started a job as a spy: “In October 1945, Pilecki returned to Warsaw to spy on the Communist government, taking an undercover job as a supply manager at a construction site. He was arrested by the Communist Secret Police on May 8, 1947, and accused of spying and preparing attacks on the Polish Secret Police. Pilecki was taken to the Mokotów prison, where he was tortured and executed” (“Witold Pilecki”).  Pilecki’s heroism may have been doomed but the courage he demonstrated, should uplift us. His examples of volunteering at Auschwitz and spying on the Communist government demonstrate sacrifice and determination and show what is possible when things hit rock bottom. We should now look at the execution of Witold Pilecki as a sacrifice for the world as his final words were, “...[Everyone who is] indebted to their mothers for their well-vaulted skulls, so that their water does not leak out - let they give some deeper thought to their own lives, let they look round and let they start, from themselves, their fight against mere falsehood, mendacity, private interest smartly passed for ideas, truth, or even for a great cause” (Pilecki). His reflections convey why after going through years of suffering at Auschwitz and being a firsthand witness to multiple innocent murders. He became aware of the importance for others to see and pursue what makes life worth living and be grateful for it. As many souls lost in World War II never had the chance to live out the potential they were built for. Let us take the death of Witold Pilecki and use it as inspiration to live life and strive not for personal interests but for the purpose of making the world a better place. Many don’t get an opportunity to change and make an impact on the world so let’s not pass up any chances. Instead stand and protect what makes society righteous, just, peaceful and happy. World War II was a chapter in our history that is difficult to reflect on, but when stories of heroism show us selfless acts of individuals for the benefit of humanity, it allows us to believe in the good of humankind again.

Holocaust Memorial Day Trust - Recognizes Pilecki's heroism and reflects mainly on his life in Auschwitz and the important impact he made.
Faces Of Auschwitz: Witold Pilecki | The Man Who Volunteered For Auschwitz - Reflects mainly on why he volunteered and the job he carried out in Auschwitz, then goes into how he managed his escape and the buildup to his execution.
Unique object associated with Capt. Witold Pilecki at the Museum Collections - Gives us the back story of the connection to the man, Tomasz Serafiński, who's idenity Witold Pilecki used to get into Auschwitz.