Not all heroes are humans, so here is a little story about a bear in WWII!

by Marusia Turanova from Lausanne in Switzerland 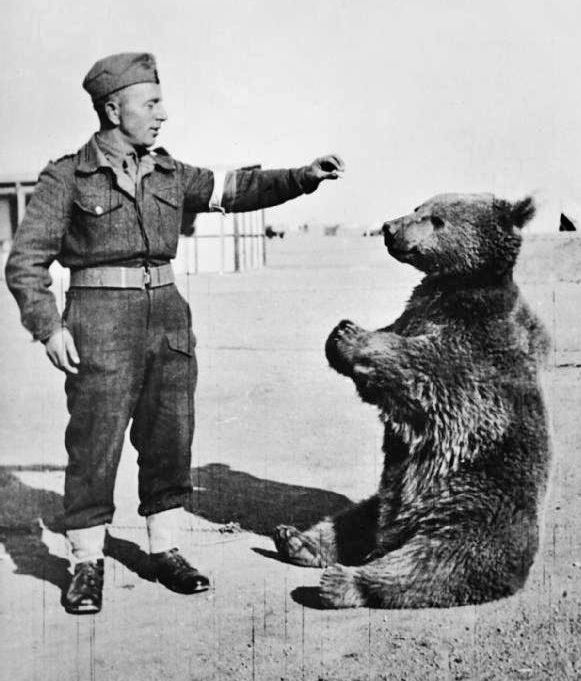 Wojtek sits in front of a soldierImperial War Museum [Public domain]Wojtek the bear was born in 1942, during World War II. He was found by Polish soldiers in Iran. A little boy came up to them and asked them for food. Later, they noticed that there was something in his bag. A while later, a little cub (Wojtek) jumped out from his bag. The soldiers traded their chocolate, a can of meat and a Swiss knife for that little cub. They got really connected to him because they shared the same past together: the Polish soldiers were kicked out of the Soviet Union and the little cub was abandoned by his mother. After that, the soldiers fed him meat and condensed milk from an empty bottle of vodka. When the soldiers and their new cub reached their base, they would hide him in their tents from the generals, but sadly, one day Wojtek went out to chase birds and bumped into one of the generals. However, the general let him stay because he saw the connection with the soldiers and the bear. The general loved the bear that he even let him sleep in his tent.

Later on in his life, Wojtek became a soldier himself. He would stay on guard with other soldiers and also help them carry heavy weights like big boxes. Wojtek really enjoyed playing in the shower room. One day he caught an spy and chased him down. All the soldiers gifted him with unlimited shower time and a beer.

He was a hero because he was a really brave animal. Animals weren't supposed to accompany the soldiers, but the Polish made him a soldier. When they went to one of the deadliest battles, which was the battle of the Monte Cassino, he wasn't doing much until he saw his fellow comrades struggling to carry huge boxes. He stood up on his back legs and started carrying boxes of shells and gun emplacements from the lorries. The Polish made a banner of a bear caring a shell.

In 1945, when the war ended, the Polish soldiers couldn't take Wojtek with them, so he ended up in the Edinburgh Zoo. He became a celebrity, and every time he heard Polish he would stand up on his hind legs and wave his paw. He was visited often by the Polish soldiers, and all of them say that they recognize him. He passed away as a hero in 1963 at the age of 22.

Wojtek is important to me because I believe that animal heroes are so underrated for the great things they've done and how they have helped us. Wojtek was a brave and determined bear. Not all heroes are humans.