Working thousands of miles from home – to build a new one

Even as deportations continue, and COVID-19 shutdowns reduce work for migrants, “remittance homes” keep rising in Guatemala’s highlands. They’re symbols of the resilience – and fragility – of the American dream.

MAY 7, 2020 - CAJOLÁ, GUATEMALA - Israel Vail López walks from room to room, treading across construction dust that powders the hardwood floor in this new home. It has high ceilings and freshly painted white walls, and he proudly turns on the lights to show his hard work. 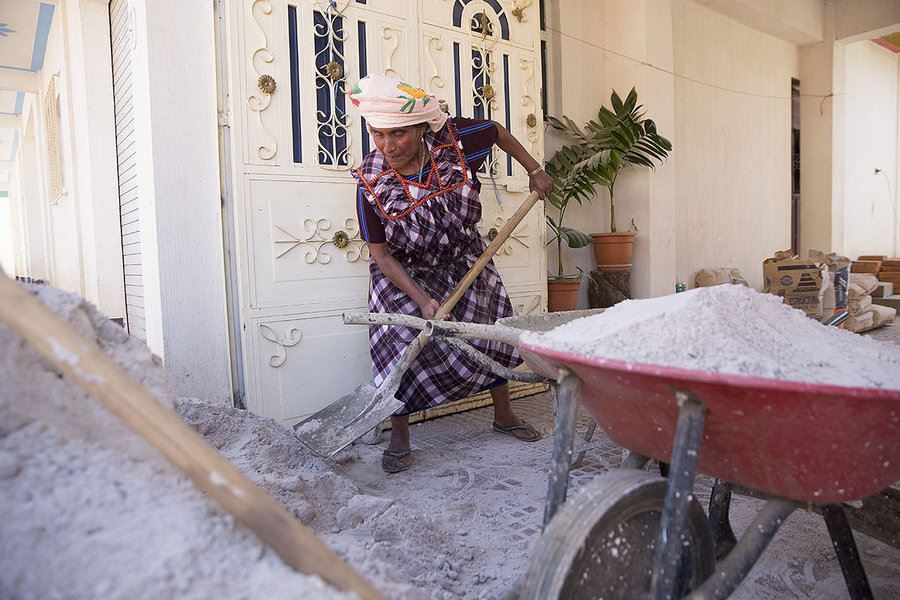 Virginia Castro shovels concrete mix in front of the remittance home she is building in Cajolá with her husband, Israel Vail López. The town has a large indigenous population and Ms. Castro wears traditional Maya Mam clothing.Megan Janetsky/Special to The Christian Science Monitor

This house and another Mr. Vail López is working on belong to his children, Juan and José. In 2014, they left the Guatemalan highlands to seek opportunity thousands of miles away in the United States. They don’t plan on returning anytime soon, but sending earnings home from their jobs as construction and landscape workers in New Jersey serves as a safety net should they be deported. These homes are commonly referred to as “remittance houses.”

An estimated 1.4 million Guatemalans and people with Guatemalan ancestry live in the U.S., sending more than $10.5 billion in remittances home in 2019. That money is used to pay school fees, put food on the table for family members left behind, or to bolster the local economies in towns and villages where employment opportunities are nearly nonexistent. Last year, more than 54,500 Guatemalans were deported back to rural communities like this one. While some migrate legally, many arrive to the U.S. as unauthorized migrants due to the difficulty in getting a visa.

“You don’t know if tomorrow or the next day immigration will arrive and send them to their homeland,” Mr. Vail López says of migrants like his sons. “But here they have a place to live. This is the idea for the Guatemalans that live [in the U.S.]” 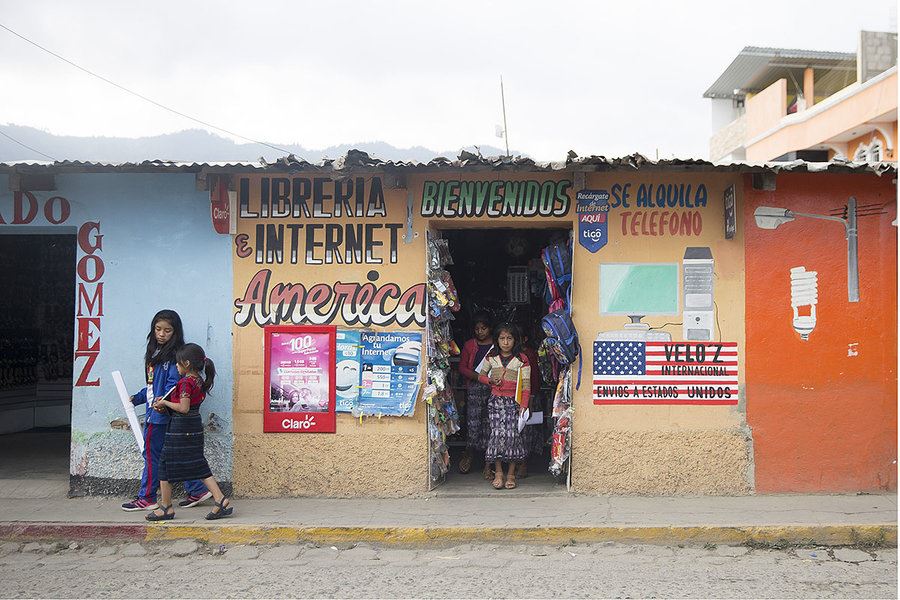 Children walk out of a “casa de envois” – a store where money is sent and received from the U.S. Remittances are crucial lifelines for families in rural Guatemala, providing for food and education as well as housing.Megan Janetsky/Special to The Christian Science Monitor

Buildings like these – often constructed in a U.S. style, with multiple stories and ornate windows, pillars, and balconies – have grown to define towns like Cajolá, made up of 15,000 people who work largely in subsistence agriculture. Cajolá is a product of decades of migration and the inextricable relationship between migrants and the community they left behind. Remittances make up roughly 75% of household incomes here, community leaders estimate.

“If you’re young and you have any aspirations of buying a home ... it’s really vital that you go to the United States,” says Richard Johnson, a researcher at the University of Arizona who studies Guatemala. Minimum wage in Guatemala hovers around $11 per day, and the majority of the economy depends on low-paying, informal labor.

It’s “almost destiny” that young Guatemalans will try to move abroad, he says. “Otherwise, you’re looking at a life of being impoverished.” 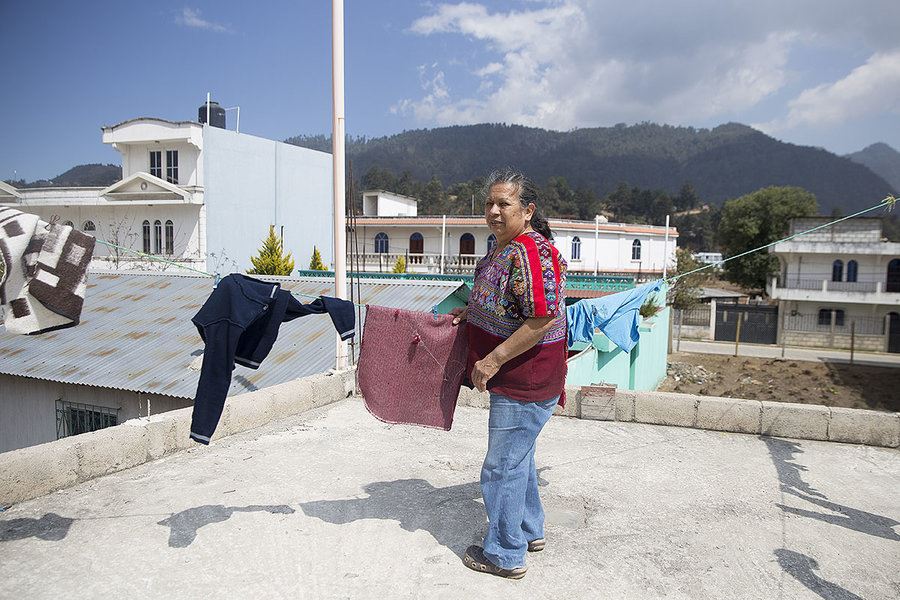 Marina Diaz takes down laundry, surrounded by large “remittance houses.” Little by little, the new homes have replaced the corn fields the people of Cajolá once worked in.Megan Janetsky/Special to The Christian Science Monitor

Rising cases of coronavirus in both the United States and Guatemala may shrink remittances and slow the rapid rise of the homes, but migration and deportation continue despite the pandemic. Remittances to Latin America are estimated to drop by nearly 20% in 2020. For now, construction continues in Cajolá.

Looking out across the town, it’s easy to pick out which buildings are constructed from remittances. They are often extravagantly large compared with the modest, single-story adobe houses historically built along the rolling green hills and farmland.

Guatemala is predominantly rural, and owning land represents success. Passing a home or farm down to the next generation has deep significance in indigenous cultures here, which believe their people have a special connection to their land. It’s a motivator for many to migrate, and earn the funds to build. This is especially true in Cajolá, where 96% of the population is Maya Mam. 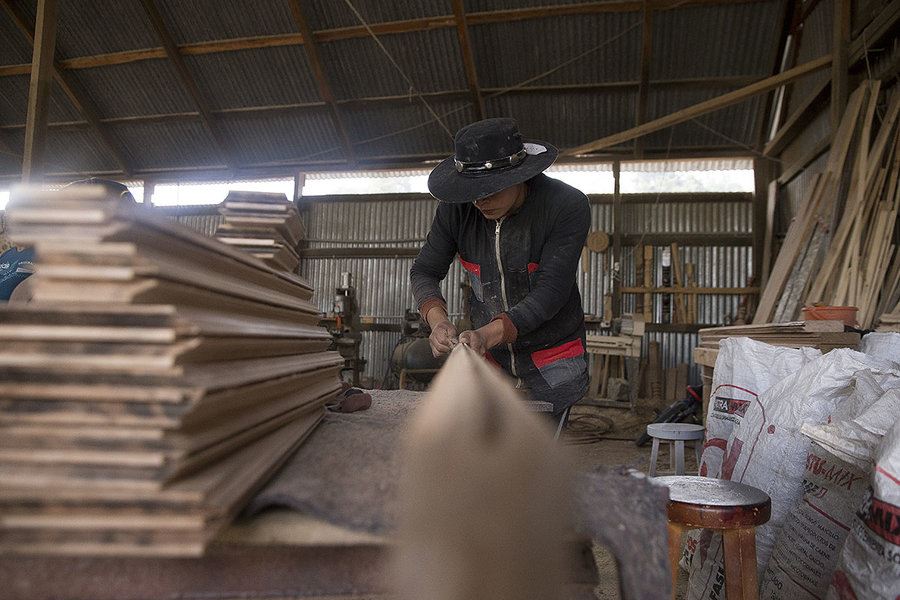 José Vail sands a plank – soon to be part of a door for a “remittance home” – in a carpentry shop. Trades like woodworking boomed in Cajolá as construction surged.Megan Janetsky/Special to The Christian Science Monitor

Having a home – and the financial security that comes with that kind of asset – was a key reason Mr. Vail López migrated to the U.S. more than 20 years ago. He, too, built a remittance house.

Back then, when telephones were scarce and illiteracy rates were high, he mailed audio cassette tapes to his wife and sons, detailing in their language, Mam, how he wanted the new home to look.

Today, Cajolá is a checkerboard of construction, with gray brick and scaffolding alongside multicolored homes. Isidrio López works on one of these sites, laying down slabs of concrete and gray brick with a careful hand.

For the past six years, he’s sustained his family by building homes. He said he’s watched construction skyrocket, a reflection of Cajolá’s remittance-based economy.

“The construction has always been growing, but especially in these last two or three years,” he says, leaning on a chest-high brick wall. This jump in remittances is a product of both increased migration northward and a feeling of instability among migrants as U.S. President Donald Trump ramps up migration enforcement. 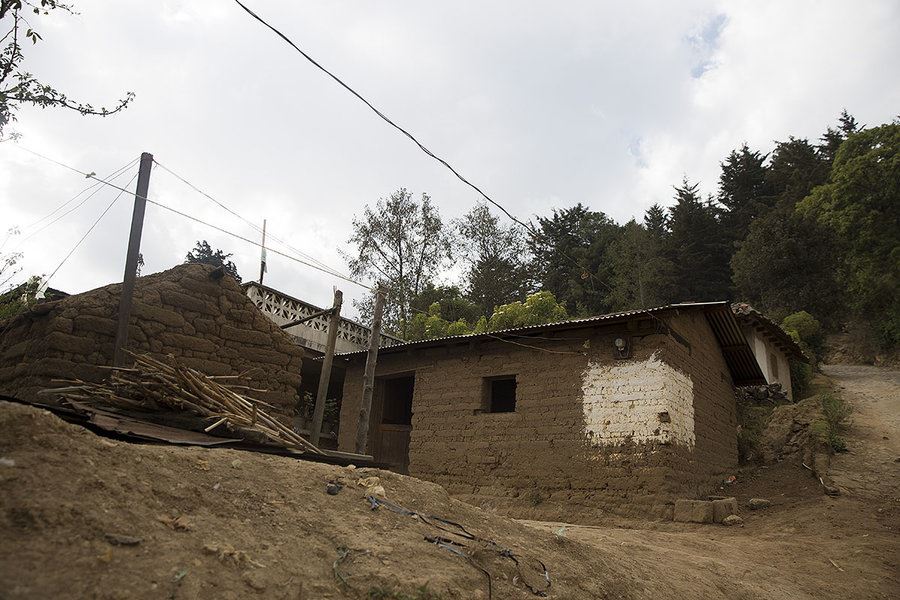 Before remittances came flooding into Cajolá, houses were small and built from adobe. Some still dot the area today. This one lies high in the hills above town, where paved roads turn to dirt and reminders of the small farming village Cajolá once was still linger.Megan Janetsky/Special to The Christian Science Monitor

Mr. López owns a remittance house himself. He paid for it with 10 years of work on a New York dairy farm. He came back to Cajolá in 2010 once he’d saved up enough money to build his family’s home.

In Cajolá, migration and remittances have generated economic security, infrastructure, and jobs. But experts note that these houses have an indirect effect. A remittance home may act as a safety net, but many are driven to migrate when they see such grand homes popping up around them.

“It can create [these] sort of social differentiated communities that draw more people into the ‘migration economy’ as a means of keeping up,” says Professor Johnson.

It’s something Marina Díaz, a former migrant and Cajolá resident, says she’s surrounded by – literally. Her tidy one-story house is wedged between buildings mimicking New Jersey suburbs and Atlanta’s classic white architecture. The majority sit vacant, changing the social structure of her town. What used to be far-reaching farmland is now covered in empty homes. Even, if the owners do return, Ms. Díaz says many won’t stick around long enough to make Cajolá home again.

A big home doesn’t change the fact that Guatemala isn’t a sustainable place to build a life for many young people, she says. There are slim economic and educational opportunities, forcing people to seek opportunity elsewhere.

From her rooftop patio, Ms. Díaz looks out at the grand buildings that stand on land once used to plant corn. “There’s so much land that doesn’t give food anymore,” she says.

But for Mr. Vail López, that very shift has transformed his family’s life and offers them hope.

“My dream was to build a place to live, and buy a place to plant,” he says, seated in his white-walled remittance house.