Wright Brothers: The Creators of Aviation

by Shourov Desai from San Diego, California in United States 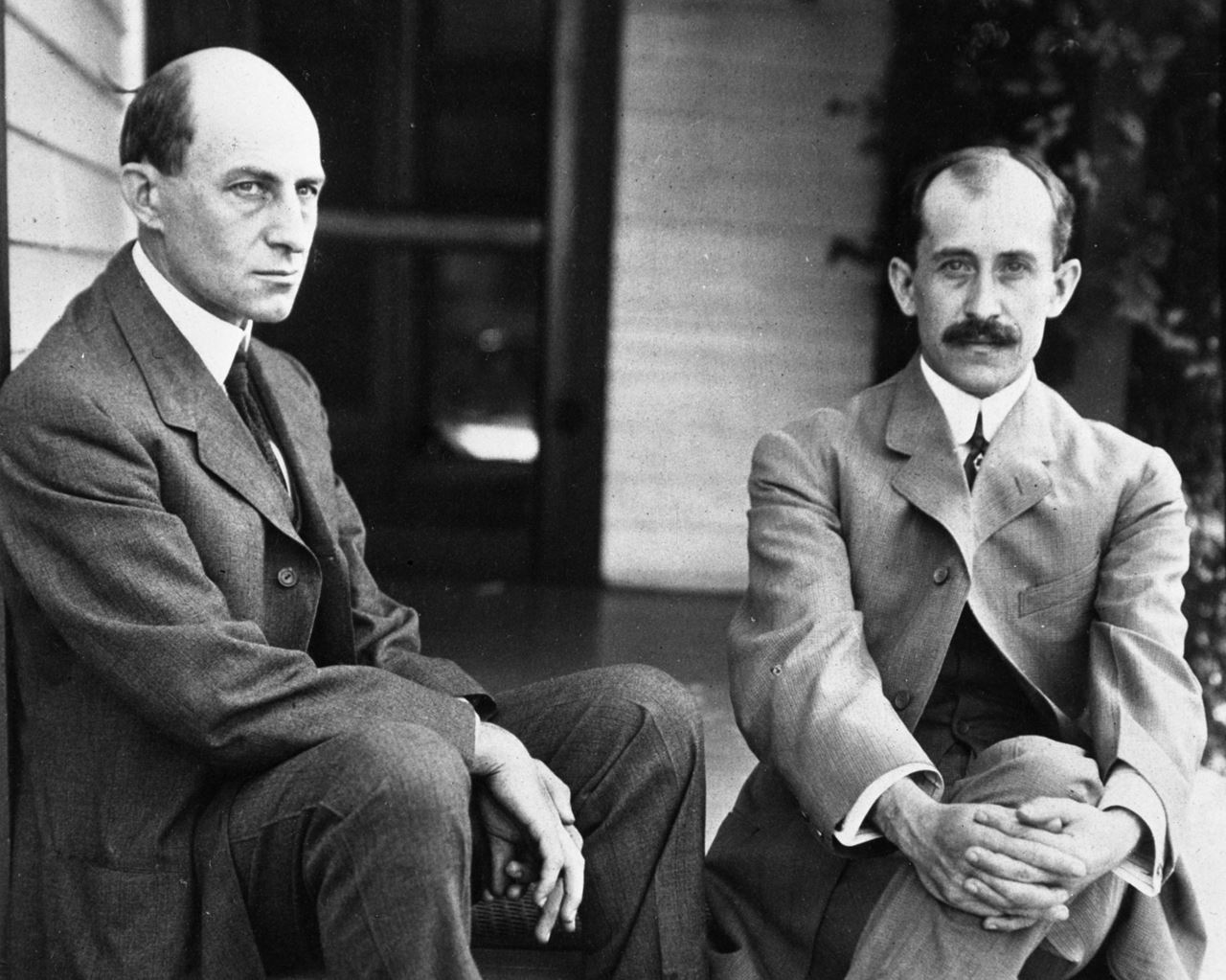 Image of Wright Brothers in front of their househttp://wvxu.org/post/how-dayton-and-wright-brothers-have-cincinnati-roots#stream/0In 1903, something impossible happened: a large contraption burst into the air at full throttle, and for the first time ever, the Wright Brothers created a way that humans could fly. However, they started dreaming of flying much earlier. Back when they were only 7-years-old, their father brought home a toy model helicopter ("Wright brothers."). The Model inspired them to replicate it. Their father, Milton Wright, was aspiring to be a bishop in the town’s church, and he succeeded. This allowed the brothers to pursue whatever they wanted to for being a bishop paid well (“Wright Brother”). They first began helping their father run an “evangelical journal” called the Religious Telescope ("Wright brothers." Encyclopedia). In 1893, the brothers opened the “Wright bicycle shop”("The Wright Brothers." Business). A couple years later however, Wilbur had dental reconstruction done after a hockey incident, and he became a social recluse ("Wright Brothers." Columbia). With the help of his brother, Orville Wright, he was able to come out of his shell. Soon after, a famous glider pilot named Lithenial crashed. This inspired them to pursue aviation and they later went on to create and fly the first plane known in America (“Diary Entry of December 17, 1903.”). This invention sprouted a new future for mankind, one where people could travel from one end of the world to another in just 11 hours. Now, one would think that this is why people considered them heroes; however, that is not the case (“Wright 2017.“) The Wright brothers were heroes because they feared nothing, and because they persevered through their troubles; it was this that led to them creating the invention that at the time seemed impossible. 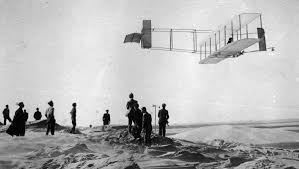 Wright Brother's First Flighthttps://www.nafinet.org/wba.aspxThe Wright Brothers were fearless because even though no one believed flight was possible, the Wright Brothers did, and they were not afraid of failure or even possible death. The Wright Brothers had many obstacles in their lives; one example was when Wilbur injured himself. “In the winter of 1885-86, an accident changed the course of Wilbur’s life. He was badly injured in an ice hockey game, when another player’s stick hit him in the face” (qtd. in “Wright Brother”.) After this incident, Wilbur became a social recluse. Nothing anyone did could change him back, because how he looked scared him. Luckily, he had his brother. Orville could not teach Wilbur much about science or math, because he was more athletic. However, Orville taught Wilbur how to live again. He taught Wilbur how to dream. This ultimately led to them accomplishing what they sought, the creation of the airplane( “Orville Wright” biography.). However, this was not the only example of where the brothers showed fearlessness. Another example was when they flew their own plane. “December 17, 1903, they succeeded in flying the first free, controlled flight of a power-driven, heavier than air plane” (qtd. in “Wright Brother”). The first plane was power-driven, and heavier than air. This means that any crash could have been fatal. However, they fearlessly created and flew the first plane. Also, this was the first plane known to America, history had never created such a model.The Wright Brothers succeeded in flying the first ever plane in the USA, and inspired many people to pursue their dreams as engineers, after all, they had no experience knowing anything about engines, they only knew about gliders, and about how dangerous they were. Even though their planes were shaky and had no guarantee of flying, instead of giving up on the inventions, the Wright Brothers simply modified the planes and made them better. They were fearless throughout the whole process of creating the plane. In the end, the Wright Brothers were fearless because they overcame all the obstacles of their past. They were also fearless when it came to building the airplane itself, for they could have and did fail many times, but they were not afraid of it. By the end, thy created the airplane, and the Wright Brothers were successful (The Official Licensing Website For The Wright Brothers).

The Wright Brothers persevered through their lives so that they could eventually achieve  the dream that seemed impossible. Even after helping Wilbur through his accident, Orville still went on to receive many awards and medals: “Recognized as a scientific pioneer, Orville received several honorary degrees: from Earlham College in Indiana and Royal Technical College of Munich in 1909, from Yale in 1919 and from Harvard in 1931, as well as a doctorate of Engineering from the University of Dayton in 1943. Wilbur received honorary degrees from Earlham College in 1909 and Oberlin College of Ohio in 1910. Both brothers were awarded a medal from the French Academy of Sciences in 1909. Orville received the Langley Medal from the Smithsonian Institution in 1910, the Elliot Cresson Medal from the Franklin Institute in 1914, a Cross of an Officer of the Legion of Honor in 1924, and the Distinguished Flying Cross in February of 1929. Orville was also the first recipient of the Daniel Guggenheim Medal in 1930” (qtd. in"The Wright Brothers.") The Brothers persevered through all of their failed attempts at the airplane. They did not create a way of flying the first time: they tried a number of times, and failed a number of times. By the end of all those times, they created the airplane (“Wright Brothers” 2009.)  In the end, he won numerous medals and inspired many to be just like him. When Wilbur died, Orville once again showed perseverance and managed to get through the loss: “Wilbur fell ill on a trip to Boston in April 1912. He was diagnosed with typhoid fever, and died on May 30 at his family home in Dayton, Ohio. [Father] Milton Wright wrote in his diary, “A short life, full of consequences. An unfailing intellect, imperturbable temper, great self-reliance and as great modesty”(qtd in. “Wright Brothers” history.) Even after Wilbur died, Orville knew that it was not the end. He never stopped working. So he continued the legacy and created more planes and trained more pilots. Orville continued working until he was 65, then he finally sold the patent. In the end, The Wright Brothers never gave up on each other; this ultimately led to the creation of aviation as we know it. However, it could not have been done if the Wright Brothers didn’t persevere. 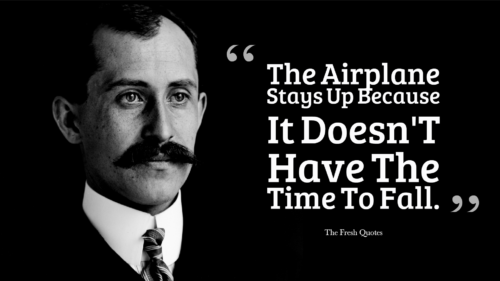 Quote from Wilbur Wrighthttps://www.thefreshquotes.com/wright-brothers-quotes-with-images/The Wright brothers were heroes because they fearlessly marched through their lives without any regrets. They also got through many of their life’s difficulties and came out strong. After all, they created the first plane (“The Official Licensing Website For The Wright Brothers”). The Wright Brothers were successful even before they created the airplane, they already started a bicycle shop and helped their father with a journal before they were 30. They could have stopped there, but they didn’t, and even though they had absolutely no knowledge of flying or airplanes, they continued to invent the world’s first one.( “The Wright Brothers.”) “Building upon their principles of wing construction, the brothers designed two eight-foot propellers for their airplane. They were made of laminated spruce, and rotated in opposite directions to reduce the craft's twisting effect. Unable to find a suitable engine for their new machine, the Wright brothers employed the help of machinist Charles Taylor to build a four-cylinder, twelve-horsepower lightweight internal combustion engine. The rest of the wood and muslin plane was constructed in sections in their Dayton, Ohio bicycle shop, and assembled at the Kill Devil Hills site. After several weeks of testing and preparation, the machine was ready to fly on December 14, 1903. The first flight ended prematurely as the airplane stalled during take-off, damaging the craft's front end. Three days later, on December 17, Orville Wright piloted the first successful flight of a powered aircraft, flying a distance of 175 feet in 12 seconds. A handful of local people looked on as the brothers alternated piloting duties for several more nearly minute-long flights, and the 1903 Wright flyer became the first machine in history to achieve sustained, powered flight under a pilot's control” (qtd in. "The Wright Brothers."). The Wright Flyer failed once, but that did not mean that it was the end for flying. After the Wright Brothers took their first flight, they were acknowledged and received many awards, medals and trophies. However, this is not what inspired me to choose them as my heroes. What inspired me was that they never gave up, they showed determination and that they loved each other as brothers. They are heroes to not only the engineering world, but the whole world itself  (“Wright 2017.“).