During the pandemic, what does it mean to come together and pray? Members of many religions are wrestling with how to best serve their faith while heeding government guidelines.

MARCH 27, 2020 - NEW YORK - Even though it was a sunny afternoon, Father Corey Bassett-Tirrell was shocked to see the line of cars in the parking lot of St. Mary Church in Chelmsford, Massachusetts, waiting to participate in the parish’s first ever drive-through confessional. 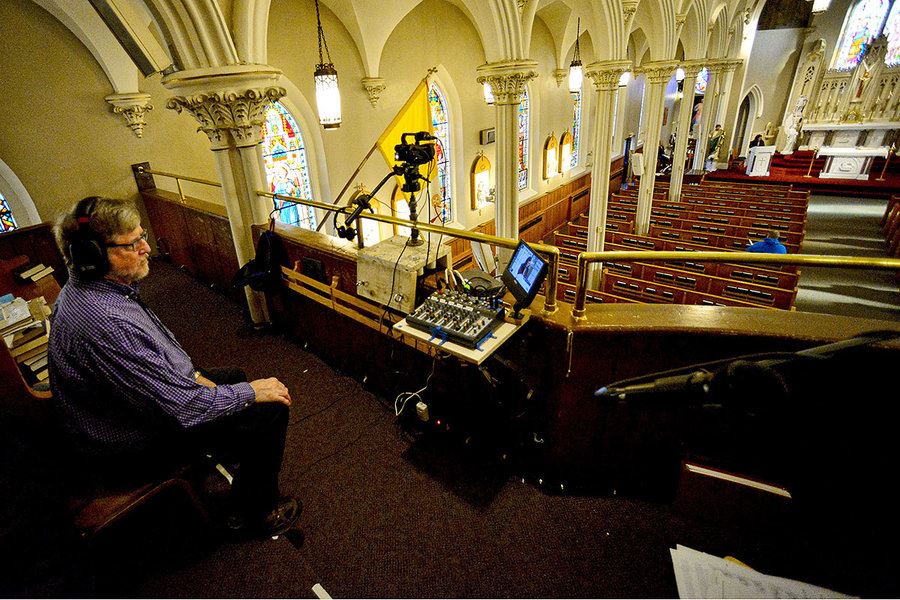 A week earlier, before the pandemic upended the religious traditions of communities throughout the world, forcing many to forgo physical gatherings for prayer and worship, the newly ordained priest had heard only a single confession in the booth within St. Mary’s sanctuary.

As he sat dressed in his white-laced surplice on a chair surrounded by orange traffic cones, Mr. Bassett-Tirrell offered the sacrament of reconciliation to 17 drive-through penitents in just over two hours.

“Never in all my days did I ever think that I would be unable to celebrate my first Holy Week as a priest,” says Mr. Bassett-Tirrell, who was ordained last year and is now the parochial vicar at the Chelmsford Catholic Collaborative, which includes the parish of St. John the Evangelist. “When the Lenten fast came upon us on Ash Wednesday in February, we had no idea that in two or three weeks’ time, we’d be in a Eucharistic fast as well.”

Like so many places of worship across the U.S., the two Roman Catholic churches that comprise this pastoral collaborative in the Archdiocese of Boston have suspended all physical gatherings – including the celebration of the Mass, the central act of worship for Catholics culminating with the sacrament of the Eucharist.

And while the collaborative is well-prepared to livestream services and sermons, having had in place robust social media options for those unable to attend in person, Mr. Bassett-Tirrell says these technologies are not substitutes for the essential physical and embodied practices of Catholic worship.

“But I see this as a great opportunity – though a difficult one,” he continues. One of the purposes of fasting during Lent is to rediscover life’s everyday joys through a period of self-reflection and abstinence.

“So my hope and my prayer is that people will come back to the altar at a time when it’s safe again, and have a deeper understanding of what it is that we are receiving,” he says.

Just two weeks into an unprecedented era of social distancing and canceled community gatherings, many of the nation’s communities of worship, including mosques, synagogues, and other traditions of worship, have been forced to find alternative forms of gatherings for prescribed rituals and forms of worship.

Within America’s tapestry of religious traditions, the vast majority have turned to technology, including interactive teleconferenced gatherings, livestreamed services, and even old-fashioned conference calls.

But for many, the absence of certain physical rites and community rituals have presented profound theological conundrums.

If it’s online, is it jumu’ah?

“To suspend the Friday prayer, to suspend an obligation that has been made quite clear in the Scripture, is quite serious – you are almost upending God’s law,” says Selaedin Maksut, a religious scholar and civil rights advocate in New Jersey who was scheduled to preach a sermon at the Muslim Community Center in Paramus last Friday before it was canceled.

Two weeks ago, as the scope and seriousness of the coronavirus epidemic was beginning to unfold in the U.S., Muslim communities throughout New York and New Jersey were “pulling their hair out,” Mr. Maksut says, as the community tried to decide on Thursday whether or not to cancel prayer services, the primary day of worship that Muslims call jumu’ah. It is a religious requirement for all adult Muslim men.

“The conversation was, well, how about we just have the sermon on Facebook so everyone can observe from home?” continues Mr. Maksut, executive director of the New Jersey chapter of the Council on American-Islamic Relations. “But the scholars came to their collective opinion that this wouldn’t qualify as jumu’ah. Jumu’ah is essentially a congregational thing. You can’t check the box and say, ‘OK, today I went to jumu’ah because I listened to the sermon online.’ You might be listening at home, but you’re really not participating in the essential physical, collective, and group effort.”

Friday services are also part of the social rhythms of American Muslim communities, a time and place to gather to discuss politics, business, and other aspects of life.

Still, in Muslim theology, Mr. Maksut and others say, the preservation of human life is paramount and supersedes all other religious obligations.

“It is our moral duty as Muslims that we take all steps necessary to safeguard ourselves and others around us from this terrible disease,” said the Fiqh Council of North America in a joint statement with organizations including The Islamic Medical Association of North America and the Islamic Society of North America. “One’s personal desire to do obligatory prayers at the masjidor fulfill other religious duties comes secondary to ensuring the common health of the larger community.”

“We’re a small congregation, and people are just trying to get accustomed to the technology,” says Mr. Stern, who’s also planning group meetings on the platform to discuss texts from the Torah and Talmud. “But we’re hoping to combine elements of the service together with an opportunity where we can actually see each other and hear each other, ask questions and answer questions, and to really, in that way, connect and feel part of the community.”

COVID-19 has in many ways thrust long-simmering theological questions about religion and the nature of community in the digital age into stark relief, says the Rev. Paul Brandeis Raushenbush, a Baptist minister who has spent a significant part of his nearly 25 years as an ordained minister in online communities.

“I always start with the question, when two or three are gathered online, is Christ there? And then, if 10 Jews are on a Zoom call, is that a minyan?” says Mr. Raushenbush, now a senior adviser for public affairs and innovation at the Interfaith Youth Core, which fosters interfaith cooperation in U.S. colleges.

“The truth is, we are in touch with one another much more because of technology than we were before, not less,” he says. “My Facebook page feels like a prayer circle, and people are reaching out to one another and people are showing up for one another in new and unprecedented ways that are allowing for a sense of deep community.”

On this virtual rock

Last Sunday, Mr. Raushenbush helped lead a spiritual gathering using the virtual reality environment Altspace. Using avatars in a virtual grass field surrounded by hills during a rising full moon, the virtual minister led about two dozen people in a guided 10-minute meditation before asking them to gather with him on a large rock in the middle of the field.

He asked how they were holding up, and as many of those gathered responded, others could virtually express their emotions with VR versions of “emoticons.” As avatars were speaking, others were releasing cascades of hearts that bubbled above their heads to express their connection to the speaker’s words.

“We are less inhibited online, which, yes, can be bad,” says Mr. Raushenbush, who lives in Brooklyn. “But it can also be good. We can actually say things to one another and show up for one another in ways that can be deeply loving, and show our vulnerability and be present to one another in a way that sometimes face-to-face meetings do not allow.”

In some ways, something similar happened at the drive-through confessional in St. Mary’s parking lot.

“I had a few of the penitents tell me – and thank us for offering the sacrament this way – because they said they had been away from the church for quite some time, but they thought this might be a less intimidating medium in which to receive the sacrament of reconciliation,” says Mr. Bassett-Tirrell.

Still, many are longing for the time when they can renew the forms of worship that are central to the faith.

Both St. Mary and St. John the Evangelist remain open for individuals to come to pray, as they follow CDC guidelines for social distancing. And priests still say the Mass and bless the elements of the Eucharist and then partake themselves – which is then livestreamed.

But one of the staff was helping with the altar linens last week, and she asked the priest if he would give her Holy Communion as well.

“And it just broke my heart, because I couldn’t, because we’re not allowed to,” he says. But it’s precisely this kind of longing during a time of fasting and absence from physical communion that makes him hope that when the crisis passes, it could usher in a time of renewal – just as the season of Lent culminates in the joy of Easter.

“In the end, we’re hoping this crisis can bring us all to a deeper connection and understanding of the Blessed Sacrament, our understanding of Scripture, and our joyful celebration of the liturgy,” he says.