by Kate from Overland Park

Have you ever thought about what a real hero is? When I think of a real hero I think of Ann Armstrong-Dailey. She persevered in what she believed in, which was that all the children in the world deserved better health care than what they were offered.

Ann was born on August 13, 1940, in San Francisco, California. Her parent’s names were Herb and Helen Armstrong. Her father was an officer in the Army. She was the oldest child in her family. Her brother was born in May, 1942 and her sister was born in June, 1947. She was an “Army brat” and a “Forest Service brat” (her father was a Forest Ranger when he got out of the Army), so they moved around a lot. She attended school in the Rocky Mountain region of the United States and in the Pacific Northwest. Because of World War II they lived with her grandparents for a number of years, while her father was fighting with the Army in the South Pacific. She loved attending the ballet and symphony with her grandparents. She also liked singing in the choir, marching in the 4th of July parade, designing clothes for her dolls and making hollyhock dolls from the flowers and buds of hollyhocks. When she was a baby they moved from San Francisco, California, to Honolulu, Hawaii; they lived at Fort Kamehameha, in a big house. Their backyard was on the beach leading into Pearl Harbor. They were directly at ground zero during the bombing of Pearl Harbor on December 7, 1941. Her mother was grazed by a bullet from a plane that was shot down while she was running with Ann in her arms, next door to a doctor’s house. During this time her father was in the mountains, goat hunting with the commanding officer.

Ann lived in Asia, Europe, the Caribbean and in Washington,DC, our nation's capital. She married John J. Dailey in 1961. She had two children, Peter in 1962 and Patricia in 1963. She was a proud wife and mother. They lived in many countries. She entertained a lot for her husband’s job. One lesson she learned is that all children are the same. She had many interesting experiences, too many to talk about here. Ann is living today.

I think a leadership quality is caring about others. Another quality is helping others go in the right direction. Ann’s grandmother was her first hero because she helped take care of Ann and her brother and sister. People look up to Ann because she is a leader with a huge heart, and she helps children with life threatening diseases everywhere. She accomplished the goal of creating Children’s Hospice International, touching the lives of children with life threatening conditions and their families.

I can use her qualities to help others. I could donate to charities, and help the people in Haiti. I could be noble like her by running a fund-raiser for children with cancer and by fighting for what I believe in. I could be brave like my hero by speaking up for others and myself, and by being a positive role model for others.

After Ann had shared this moving anecdote with Caldecott Medal Winner Chris Raschka, he was inspired to write The Purple Balloon for CHI's 25th Anniversary.

“When a child becomes aware of his or her pending death and is given the opportunity to “draw your feelings,” he or she will often draw a blue or purple balloon, released and floating free. Health care professionals have discovered that this is true regardless of a child’s cultural or religious background, and researchers believe that it demonstrates the child’s innate knowledge that a part of him or her will live forever."
The Purple Balloon, Schwartz & Wade Books, Random House, Inc.

“This is an important book – simple, reassuring, and loving.  It will be a perfect tool for opening discussion on a difficult subject for children, parents, teachers, students, and librarians."
- Archbishop Desmond M. Tutu, Nobel Peace Prize Winner 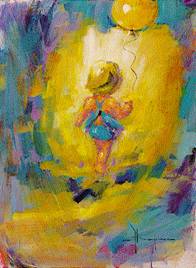 Toward Light by Marilyn Sunderman

Marilyn Sunderman painted Toward Light for Children's Hospice International in the early 1980’s in celebration of the founding of CHI. 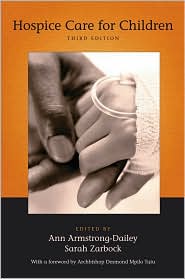 Kate, her mom and grandmother will be the guests of Children's Hospice International 21st World Congress in Washington, DC this fall!