"But none rises higher in my estimation than the Dutch lady, Miss Tinne, who after the severest domestic afflictions, nobly persevered in the teeth of every difficulty." - Dr. Livingstone, explorer and missionary

Close your eyes and think of an explorer.

Who comes to mind first?

Chances are it's a man, right?

But did you know that many women were also important explorers throughout history? 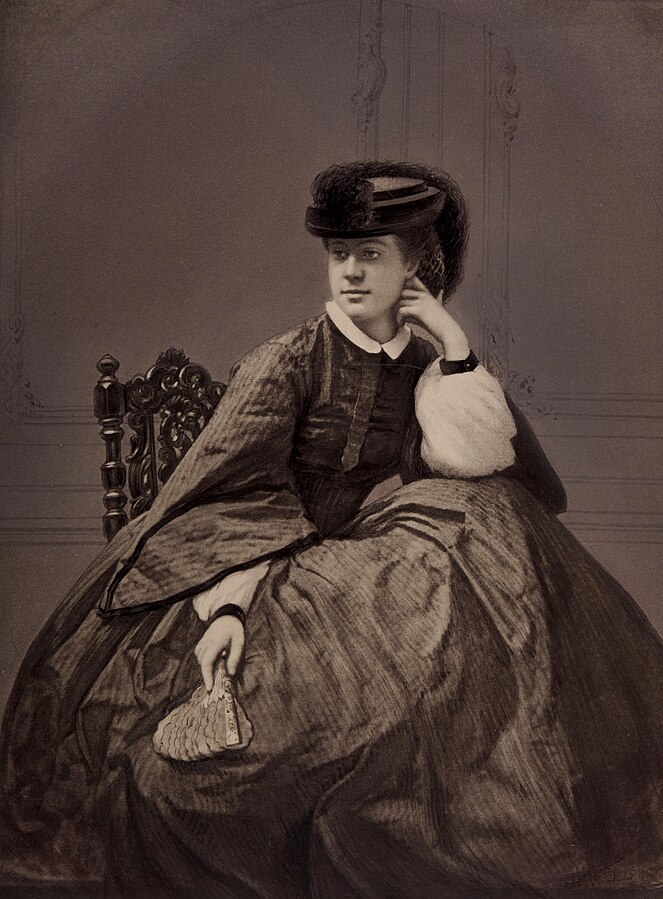 Even though, for the most part, emphasis has been placed on those brave and daring men that boldly ventured into the great unknown, there are also many bold and brave women who overcame not only the fears and dangers associated with exploration – but also the gender barriers and stereotypes surrounding it.

Their story deserves to be heard too, right?

One such adventurous soul was a young woman by the name of Alexandrine Petronella Francina Tinne (often also called Alexine), a Dutch explorer in Africa and the first female to attempt to cross the Sahara. This young adventurer lost her life in the process, but her heroic journey and intrepid nature live on in the hearts of all who hear her story.

Alexandrine was born on October 17, 1839 at The Hague, Netherlands to Philip F. Tinne, a wealthy Dutch merchant, and Baroness Harriet Van Steengracht-Capellan, the daughter of a famous Dutch Vice-Admiral. She was tutored at home and excelled in piano and early photography (a trait that would serve her in her later adventures). Her family was considered liberal, and coupled with their wealth, they traveled extensively throughout Europe, and allowed Alexandrine to travel alone, so she spent many summers with friends in England and France and became fluent in both languages. Her father, who was 63 when she was born, passed away when she was a child (some sources say at age 5 others at age 10) and she became the richest young heiress in the Netherlands.

Because she and her mother shared the same adventurous spirit, the two Victorian ladies continued to travel together after Mr. Tinne’s death. When Alexandrine was 19 they toured Egypt – a visit that would prove pivotal in their lives. Together they traveled by camel and donkey to the Red Sea, then later to the Holy Land and Damascus. The region was still considered dangerous, especially for female travelers. This particular journey, though, as grueling as it was for them, sparked an insatiable quest for adventure in Alexandrine and a desire to explore the region even further.

Their financial prosperity would allow her adventurous spirit to realize its bold dream. Affording a small steamboat which towed two boats behind it full of provisions for the entire crew, in 1857 at the age of 22, she set out to explore the Nile with her mother. They brought with them an Arab crew, servants, a few soldiers, a horse, a donkey, and five dogs (her biography is often referenced in animal-lovers websites and sources). The unique group reached Wadi Haifa, but was halted by a large waterfall.

The three Dutch ladies spent the following year exploring the region, and were later joined by Baron Theodor von Heuglin and Dr. H. Steudner at Khartoum. In 1863 they set by boat to Bahr-el-Ghazal, hoping to see how far west the Nile basin extended, and to see if there was in fact a large lake in Central Africa, as was rumored. From Bahr-el-Ghazal onward they continued their journey by land, crossing arduous north African terrain.In late 1861 and 1862 the women, this time also accompanied by Alexandrine’s beloved Aunt Adriana, would attempt the journey again in hopes to explore the mysterious Sudan region, and to ultimately find the elusive source of the Nile. Because of the dangerous, often rushing, waters, no European, and surely no European woman, had explored any further than Gondokoro up until that point, and yet the brave party pressed on, entering the region of the Dinka tribe. Their achievements in exploration were impressive in and of themselves, but particularly so because of the status of Victorian women, and the roles that were expected of them.

The journey was not an easy one for any of the travelers, and they were all particularly afflicted by tropical fevers. It is said that they were bitten so extensively by mosquitoes that their faces swelled beyond recognition. The rainy season was in full effect; their tents constantly collapsed under the arduous storms, and the group was constantly cold and wet. The soldiers they had hired even mutinied over their provisions! Nevertheless, the group pressed on, and Harriet, Alexandrine’s mother, even kept a notebook on their travels, surroundings, and perils, as an aid for future travelers.

Because of their trying conditions, Alexandrine became terribly ill with a fever and the women stayed amongst the Shilluk tribesmen for a month until she regained her health. Soon other members of the group fell ill as well, and her favorite maid Flora, and then another beloved maid, Anna, both died from it. Steudner died in April, and Alexandrine’s own mother died in June. Evidently heartbroken, the party yet continued in their journey, reaching Khartoum in July of 1864.

The loss of her dear mother left Alexandrine riddled with guilt and sorrow, feeling that her mother had died because of Alexandrine’s insistence upon the journey, and sadly, their relatives back home seemed to agree. Tragedy soon struck again when Alexandrine’s aunt also succumbed to fever in Khartoum. The young Alexandrine returned to Cairo as an orphan, having lost her beloved mother, as well as having lost her favorite aunt. Ashamed and afraid, she vowed never to return home.

Their journey was not in vain, though, as the geographical and scientific knowledge gained from their travels were very important to later expeditions in the region. The explorers collected materials and knowledge about the geology, foliage, animal-life, and climate of the region, and even a series of detailed drawings of plants of the area, which were later published as a book still available today.

In fact, their travels gained great admiration throughout the region, as well as Europe.

“By now, Alexine's exploits had inspired admiration and praise in the newspapers. She was described as "young and beautiful," "remarkably accomplished," "a fearless horsewoman," "mistress of many languages including Arabic"—a reputation that helped when, later, she moved to Algeria and Tunisia, and began to speak out candidly against the suffering involved in slavery, and set up a house for liberated slaves next to her own home.” - excerpt from Alexine and the Nile by Leo Hamalian.

Alexandrine remained in Cairo for four years, traveling throughout the region, into Algeria, Tunisia and the Mediterranean. Her ceaseless spirit of adventure pushed her onwards, and in 1869 she began a journey across the Sahara with a caravan from Tripoli, with the intent of reaching the upper Nile by way of Lake Chad and Darfur. It is believed she may have hoped to discover the source of the Congo River, an important goal for Victorian explorers. In that day, her journey into that region was comparable with polar expeditions – it was considered nearly impossible, particularly so by a young female explorer.

Alexandrine well understood the grueling desert conditions and she brought along two iron tanks filled with water, (along with an ice machine), carried by camels. It is theorized, though, that rumors spread that the tanks were instead filled with gold coins. In Marzuq she met a guide who said he would escort the group through the Tuareg country, (a region where only 2 European explorers had ever spent time) where she would meet with the chieftan before traveling to Lake Chad.

Sadly, it was not the arduous conditions of the region that she fell victim to, but instead what is felt to have been a greedy plot on the part of the chieftan which included the alleged guide. En route to Ghat on August 1, 1869, at the age of 29, she and two Dutch sailors were murdered by Tuareg. The manner in which she died was particularly tragic, in that her hand was cut off, and she was left to bleed to death alone in the desert. Many theorists instead believe that the cause of the slayings was actually an internal political conflict between the local Tuareg chiefs, with Christian travelers as the victims of their dispute to prove that one of the chiefs was too old and weak to protect travelers in the region, much less the villagers. Whatever the case may have been, the assault cut short the life of one of the greatest explorers the region had ever known.

Unfortunately, the tragedy for Alexandrine didn’t end there. The collections of ethnographic specimens which she and her party had collected in their travels and stored in England, along with a collection of detailed letters she wrote while on her journey, were destroyed during WWII. The church that was built in her memory in The Hague was also destroyed in Hitler’s bombing raids, and all that was preserved of their travels was her mother’s diary. The papers and photographs that do remain are now stored at the Royal Archives in The Hague. In her memory, there is a window plaque in Tangiers, and a small marker near Juba in Sudan honoring the great 19th century explorers of the Nile, which includes her name and the farthest point she reached in her exploration.

Sadly, perhaps because of her lack of sufficient documentation of her travels, or because she was erroneously seen by some as more of an adventurous traveler than an explorer, she is often unfairly excluded from the history books on the exploration of the Nile region, which are instead filled solely with her male counterparts.

Alexandrine Petronella Francina Tinne's story deserves to be heard, not simply because she was a female explorer in the arduous African desert during an age where such a thing was generally unheard of, but because she embodied what it is to be brave, with a heart full of adventure and a yearning to bring knowledge of regions unknown to the rest of the world ... not as man or as a woman... but as a fearless explorer of the highest caliber.

Alexine and the Nile - "In the story of the search for the sources of the Nile, one explorer—rarely mentioned—was Dutch and female. Alexine Tinne, who would have been one of the richest heiresses in The Netherlands, squeezed into her short life enough adventure..."
The Mariner's Museum and Park - Learn more about the explorer.

MORE ABOUT WOMEN TRAVELING IN AFRICA:

"Inspired by her own contact with Africa, Caroline Oliver has written biographies of five intrepid women who traveled through the interior of Africa during colonial times..." more

"This undated engraving, entitled Scene on the River Nile at Philae, Above Syene shows Dutch explorer Alexandrine Pieternella François Tinné and her party exploring the Nile River in 1862. Looking for the source of the river, they continued into the unmapped watershed area between the Nile and Zaïre rivers where several members of their party died."