"I don't care whether you're driving a hybrid or an SUV. If you're headed for a cliff, you have to change direction. That's what the American people called for in November, and that's what we intend to deliver." ~ Barack Obama

My hero is Barack Obama. In my opinion, you don’t have to fight in a war to be a hero; you just have to be responsible, courageous, loving, trustworthy, respectful and caring. Barack Obama has all of these traits. He is my hero because he inspires not only me, but many others as well. He is the 44th President of the United States and lives in the White House in Washington, D.C. I know he has what it takes to be the president. He has the brains, the ideas, the loving personality, and the will to be responsible and trustworthy. He’s a very sharp man. He always tries to make the best choice to improve the economy. He is the first African American President. He is outstandingly intelligent and doesn’t want what’s right for him; he wants what’s right for the world. Obama is a hero, MY HERO!

His family is a mixture of African American and Caucasian. His mother is from Kansas, while his father is from Kenya. They lived in Hawaii when Barack Obama was born. At age two, his parents got divorced, so his dad went back to Africa while his mom stayed with him in Hawaii. When he was six, he and his mom went to Indonesia where his mom got married. At age ten, Barack returned to Hawaii to live with his grandparents on his mother’s side. His grandfather supported the troops in Europe after D-Day in World War II.

Barack graduated from Harvard Law School where he was the first African American President of Harvard Law Review. He returned to Chicago, Illinois to help the community. Some of the communities were hurt by the closing of local steel plants, so Barack helped them rebuild buildings, and other structures. After helping the communities in Chicago, he worked in Chicago as a civil rights lawyer. He then taught at the University of Chicago Law School, where he helped students gain more knowledge.

Obama got more involved in politics every day and decided to run for the Illinois State Senate in 1996. After winning the seat, he worked to pass the first major ethics law in twenty-five years. He also worked to lower taxes and improve health care for everybody.

How did Barack achieve fame, you might ask? It started in 1995 when Barack published an autobiography called, Dreams from My Father: A Story of Race and Inheritance. His audio version won a Grammy.

In 2008, Barack ran for President against John McCain. He won 28 out of 50 states and received over 66 million votes to John McCain’s 58 million. OBAMA WON THE PRESIDENTIAL ELECTION. The first African American President was elected on Tuesday, November 4, 2008. Sadly, one day before Barack was elected, his maternal grandmother, who raised him, died.

Barack Obama inspires many people by the books he has written, the outstanding speeches he gives, his community service and his belief that, together, we can all make the world a better place. He also inspires people by his determination to solve problems with other countries through negotiation instead of war.

Barack Obama has had an interesting life. He has overcome obstacles during his life with great success. His actions throughout his life are evidence that he wants to make the world a better place, influence many people to do the same and create a more peaceful world. After college, he had a chance to earn a lot of money, but instead chose to help rebuild communities. I believe that Barack Obama is a leader and a symbol of hope. Barack Obama is a hero, MY HERO!

2. He has read all of the Harry Potter books.

3. He has boxing gloves signed by Muhammad Ali.

4. His favorite main dish is his wife’s shrimp linguini.

5. His favorite book is Moby Dick by Herman Melville.

6. He worked at Baskin Robbins as a teenager and now isn’t so crazy about ice cream.

7. During high school he was known as “O’Bomber” because of his crazy skills at basketball.

9. He was known as Barry until going to college when he asked to be addressed by his full name.

10. He carries a miniature Madonna and child statue and a bracelet which belongs to a soldier in Iraq for good luck.

11. He plans to install a basketball court at the White House.

12. His favorite artist is Pablo Picasso.

13. His specialty at cooking is chili.

17. He likes playing Scrabble and Poker.

19. His name means “one who is blessed” in Swahili.

20. If he weren’t a politician, he would have liked to be an architect.

21. His worst habit is checking his blackberry.

From 50 facts you might not know about Obama. (www.telegraph.co.uk) 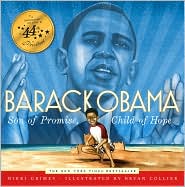 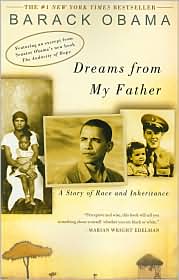 Dreams from My Father: A Story of Race and Inheritance
Barack Obama