by Eric from Port Royal

Heroes are people who often go against what is expected of them. They fight for what is right, even if they are persecuted and silenced. It takes great inner strength to become someone in a world where you are oppressed and looked down upon by those who hate you or envy you. To rise above this is to go beyond what is expected of you. To overcome the obstacles that are put in your way to victory is to triumph. That is what a hero is. Sor Juana Inez de la Cruz is one of them. She made a deep impact in the world, by being a female intellectual in a world where most women led a life of servitude and silence. Juana broke this silence that was expected of her and made a yell that rocked a nation. When she was told to be quiet, she would not back down. Juana defended her right to knowledge and she made sure that her ideas were made known to everyone. That is what a hero is all about.

Juana Ramirez de Asbaje was born in Mexico in the year 1648. She was born to an illiterate mother who ran her own hacienda. Her father was always absent from her life. It was her grandfather who inspired her to seek intelligence. Juana learned with great ease and triumphed in anything she did. She learned to read before the age of three. She would often punish herself for not learning fast enough by cutting off her hair. She pleaded her mother to dress her up in boys clothing and let her go to the University of Mexico, but she refused on account of her age. She desperately wanted to do advanced studies, but her mother refused. Because of this, she taught herself Latin in twenty lessons.

Word soon spread about Juana’s immense intelligence. She was invited to the court of Marquis of Mancera. There, she was “tested” by forty philosophers, theologians, and scholars. The forty men were astonished at Juana’s great intelligence. She had finally proven herself. People finally recognized a female intellectual, in a world where women were oppressed and looked down upon. She was invited to stay at the court, and while there, she was asked to write poetry for social and political events. Juana wrote, concentrating her knowledge on mathematics, logic, music, and theology. This was sure to attract attention from enemies, since she lived in a world where intelligence was only associated with men, but for the meantime, she had “royal protection,” since she was a friend of the Marquis, and she could continue without threat from anyone.

Some time later in 1667, Juana joined the convent of the Barefoot Carmelites, but approximately a year and a half later, she left the convent and entered a new one, the Convent of the Order of Saint Jerome. One of the main reasons she joined the convent wasn’t to get closer to God, but as a means to escape marriage. The Convent of the Order of Saint Jerome was where she would live to the end of her days. This new convent was not strict like the Carmelite Convent. There she had living quarters that resembled apartments. It was there that she taught girls music and drama. During her time there, she continued to write for the viceroy and acquired a large library. When the Marquis' term had ended, Marquis de la Laguna and his wife Maria Luisa took their places. Sor Juana and Maria became intimate friends, due to their closeness in age. Maria Luisa helped publish some of Juana’s works. When the Marquis de Laguna’s term had ended, she no longer had that “royal protection” that enabled her to defend her intellectual life. It didn’t take long for envious men to attack her. She was asked to criticize a sermon by an anonymous person. The sermon attacked the Jewish people and the priest boasted that his blood was better than those of the Jews. She wrote Carta Athenagórica, but she never published it. Without her knowledge, the Bishop of Puebla published Carta Athenagórica under the pen name Sor Filotea, with his own introduction accusing Sor Juana of being immature and stupid. Soon, Sor Juana published La Respuesta (The Response) in which she defended her rights as a woman and her right to education. She presented her thoughts about the equality of men and her thoughts on the education of women. It was this response that ended her career as an intellectual nun. Under threat of severe persecution, she was forced to stop writing and she sold her books and musical instruments. Sor Juana was forced to sign, in her own blood “I, Sor Juana, worst of all.” She never wrote again, and dedicated her life to caring for others. When a plague came to Mexico, she caught it while she was attending to her fellow nuns.

Even though she was threatened, Sor Juana managed to break the silence that women had been forced to keep. Juana fought to protect her rights and when silenced, she fought back, with even greater strength than before. In a world that was entirely against her, she made her voice known and through her actions, she dealt a powerful blow to a male dominated world. It is through her that women know that they too can be heard. 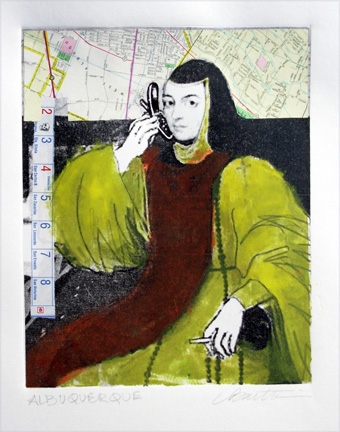 This work of art by Lena Bartula is shared in the MY HERO Virtual Gallery.