by Sarah from Dublin

Rachel Carson had the perseverance to go to whatever lengths it took to get through the hard times and to still show the world what she thought was right. She had passion for nature’s survival and tried to save it because it was a part of her life - not because she was running for something and needed to get votes. Rachel also had the patience to go through life’s downfalls and still work for what she believed in.

After high school, Rachel went to the Pennsylvania College for Women in Pittsburgh with a hundred dollar scholarship. Rachel’s biology teacher, Mary Skinker, taught her students to love nature. She often taught while hiking in nearby forests, giving Rachel’s love of nature another boost. Rachel graduated in 1928. Rachel then went to the Marine Biological Laboratory at Wood Hole, Massachusetts until autumn.

The Carson family then moved to Chesapeake Bay. Rachel’s family was having hard times so Rachel went to work in Zoology at the University of Maryland. Rachel received her masters degree in 1932. Then Rachel’s father died in 1935. Afterwards Rachel was left to support her mother. Carson sought to work at the United States Bureau of Fisheries. Carson landed a 16 year writing job there. Afterwards Rachel’s sister, Marion, died at 40 years of age. Rachel dutifully took in her two daughters. Then the Carsons moved to Silverspring, Maryland.

In 1936 Rachel acquired the promotion to a full time junior aquatic biologist. Afterwards Rachel beat her fellow biologists, who were all male, and acquired the title of the first female biologist ever to be hired by Bureau of Fisheries.

Soon afterward Rachel wrote an article,Undersea, and submitted it to the Atlantic paper. Hendrik Willem Van Loon who wrote The Story of Man Kind read Undersea and convinced his publisher to find this new author. After meeting him, Rachel agreed to write her first book, Under the Sea Wind in 1941. Unfortunately, book sales went down after the bombing of Pearl Harbor. Then, Rachel became chief of the office of information of the Fish and Wildlife Service. Rachel was to promote fish as an alternative to other foods that were in short supply during the war. From 1943-1945 Rachel made four pamphlets describing 65 different types of fish.

Later after World War II, Rachel wrote a series which she titled Conservation In Action. By fall of 1948, Rachel Carson had entered what had currently been an all male domain by becoming a biologist and becoming editor-in-chief of the information division. Rachel later wrote, The Sea Around Us while working full time for the Fish and Wildlife Service. Later Marie Odell re-released Under the Sea Wind. Afterward Rachel bought a house on the coast of Maine. After settling in, Rachel started a book on the shoreline which she titled, The Edge of the Sea.

Rachel later got a letter from a friend who had had her land sprayed with DDT. Afterwards she had found birds dying throughout her land. She begged Rachel to find out why this chemical was killing off her birds. Rachel wrote a book on her findings which she called Silent Spring. Rachel submitted Silent Spring to a newspaper which, after being published, started a public outrage. The president took legal action and had the country's top researchers study the topic of DDT. Today we don’t use it any more because of the consequences it has on our world.

Rachel Carson wrote many books and helped nature in many ways. Rachel even helped other people see the dangers to wildlife that we still invoke today. Rachel Carson is my hero because she helped nature survive and we both agree that nature is an important part of this world. If I, or anyone else, could have the kind of effect on this world as she did -- then this world would be a different and better place to live for us and for nature. 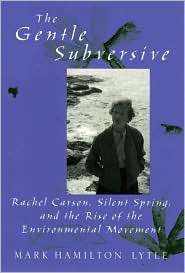 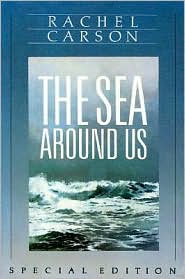 The Sea Around Us
Rachel L. Carson, Jeffrey S. Levinton (With)