Located in the sub-Saharan desert, and plagued by drought, deforestation, and a costly war spanning several decades, Eritrea, a tiny country in Northeast Africa bordered by Ethiopia and Sudan, is facing a dire energy crisis.

Yet, as the population continues to increase, as consequently does the nation’s growing need for cooked fare, rural Eritreans have unwillingly found themselves abetting this energy crisis in the daily use of their traditional cooking stoves. The mogogo stoves are primarily used for baking the traditional injera bread, a pancake-like staple that accompanies most Eritrean cuisine.

While meeting basic household needs, the traditional mogogo stoves, are, in turn, creating a slew of problems for rural Eritreans and for the nation’s ecological welfare.

The stoves, largely inefficient and requiring excessive amounts of energy (as produced by burning wood) have led to further deforestation, in addition to air pollution created by the large amount of smoke they produce.

A History of Deforestation

Timber depletion has been a long-running issue in Eritrea, dating back half a century, to the nation’s colonial era in the early 1900s when, once-extensive juniper forests were logged excessively to meet the needs of Asmara, the capital city. This, coupled with a three-decade long war for independence from Ethiopia (which ended in the early 1990’s) during which national forests were further depleted.

To make matters worse, Eritrea has also had a steady decrease in rainfall since the 1940s, leading to drought in an already struggling nation. Unable to regenerate themselves because of lack of rainfall in already trying sub-Saharan desert conditions, Eritrea’s remaining forests are no longer capable of meeting the nation’s ever-growing energy needs.

Particularly affected are the nation’s rural areas which depend on the natural timber fuel supply for sustenance, using it in their traditional mogogo stoves. The rural population grew extensively during the war, as nearly a third of the nation’s population became displaced, so the use of these stoves grew exponentially. Added to this is the fact that the nation’s overall population has grown by an average of 3% a year, and the need for fuel supply is greater than ever, and yet, much less accessible.

As wood supplies are drained, alternative fuel is used in its place, namely dung. The poorly-directed smoke emitted from the traditional stoves causes lung and eye disease in most exposed to it, particularly women and children. The mogogo stoves also sit on the ground, burning openly, and in turn, pose yet another physical danger for children.

Despite what seems like endless misfortune for Eritrea – from costly colonialism, to war with neighboring Ethiopia and consequently a stifled economy, to deforestation, and a seemingly endless drought which has produced a long series of ruined harvests -- Debesai Ghebrehiwet Andegergish, a renewable energy specialist and Director of the Energy Research and Training Center in Eritrea, has not lost hope for his beloved homeland.

He has vowed to make his nation “green again,” and although the drought and rampant deforestation makes this a promise difficult to keep, if anyone can do it, Debesai can.

He holds a Masters degree in wind and solar energy from Odenburg University in Germany and another degree in physics. He became the director of the Ministry of Energy and Mines Energy Research Training Center in Eritrea when it opened in 1992, at the end of the war, with the intent “to introduce renewable energy technology in Eritrea.”

Studying the Eritrean energy crisis, Debesai concluded that a key source of its energy problems did, in fact, stem from the mogogo stoves that for centuries had filled local homes with smoke and soot.

According to Debasai's research through the ERTC, it is believed that Eritreans burn about 700,000 tons of firewood each year, about half of the total amount used nationally, in cooking injera, alone.

Intent on creating a solution, Debesai used his knowledge and expertise to design and create what may finally bring relief to rural Eritrea’s ever-alarming energy crisis. 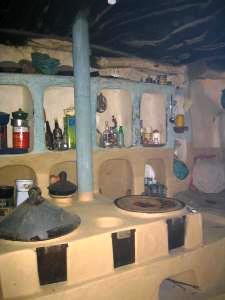 The stove has a chimney and a valve to redirect smoke outside the house, and to control airflow, promoting health benefits for those using the stove, and to those exposed to its smoke.

Debesai's invention, alone, has the potential to reverse the nation’s deforestation crisis. The new mogogo can burn a combination of dung and wood, reducing the need for firewood for fuel by as much as 50%, as research has shown the stove to be three times as efficient as typical traditional Eritrean wood stoves.

This, in addition to the slew of benefits it offers its users on a daily basis. The new stoves afford emotional well-being, as families realize that they are no longer as dependant on a limited timber supply.

Not to mention, of course, the health benefits offered by the improved mogogos. Since women typically do all the cooking in Eritrea, the stoves are particularly beneficial to them and to their children, as they no longer have to be exposed to the excessive smoke and burning pollutants. Prior to the introduction of the new mogogo stoves, homes were often filled with smoke, and ceilings were black with soot.

A truly grass-roots, project, Debesai and the Energy Research Training Center are working hands-on to make the new stove design present throughout all of rural Eritrea. They train villagers in the creation of stove molds, and in the construction of the stoves, and even assist and often fund the distribution of key stove components. They then monitor the progress of the numerous village stove projects to ensure that the stoves are as they were intended to be.

As women are the ones likeliest to use the stoves, it is the women of the villages that are key to the success of the introduction of the new stoves, and the ERTC has trained thousands of Eritrean women in their use. Now, the ERTC also trains women in teaching other women, both in how to use the stoves, and in their construction! In 2005 Debesai created a brick mold that makes it even easier for women to build the stoves themselves, which Debesai feels will greatly expedite construction, as again, it's the women of the nation that want them the most.

In 2003 Debesai’s design won England’s Ashden Award for sustainable energy, affording him $50,000 in prize money that in turn went to building 2000 more stoves and training 400 homeowners in their use. Most recently the respected Tech Museum Awards selected Debesai as an Intel Environment Award Laureate. The awards celebrate "innovators using technology to make the world safer and healthier, more prosperous and just." The added publicity from the award is sure to help promote the expansion of his project.

Debesai is a man on a mission, intent on ensuring that improved mogogos are in every rural Eritrean home within the next few years. This is an estimated 450,000 homes, but again, if anyone can do it, Debesai can. Already in some villages, over half the households host the improved mogogos. And with Debesai in action, it can be presumed that soon enough, every rural home will, and his beloved homeland will be green once again.