by Cheikh Darou Seck from DAKAR

Mamadou Tall Diedhiou was born on August 7th, 1947 in a small village along the South coast of Senegal, called Niamone. At the required age he started school but stopped after some years.

Later he discovered his growing interest for poetry and started writing poems about his village. Some of his poems are also about the fate of birds whose nests and homes were destroyed by machine guns and rockets during the rebellion war. These poems are usually sad. But they denote his strong love of birds which was to play a great role in his career as an artist and greatly influence his work.

When I saw Tall for the first time, he was picking up some discarded objects in the streets. I did not know that he was an artist at that time. Then one day I saw one of his creatures on the desk of a call centre manager. It was a beautiful bird made from an old flattened tin, a maize leave, pearls and some sticks. I asked who its creator was, and they gave me his name and address. I went to see him and asked him many questions. To my great surprise, he agreed to answer them all.

In 1993 he got the idea of singing the beauty of his village. That was when he started writing poetry. The first poem that he wrote was titled "The Moonlight Girl." After writing the poem, he wanted a painting of the girl that he sang about in it. Then he went to see an artist and asked him to paint the girl for him but the artist charged too much. Since he could not find the money, he decided to do it himself. "That's how I moved from poetry to painting," he said. A Ghanian named Eric who had his workshop next to that of Diedhiou helped him with his painting, giving tips as to how to use color and light or shapes in an optimal way. Little by little, he improved his painting, combining it with the intelligent use of old objects like tins or cans that he picked up from the streets. This was totally new in the Senegalese artistic environment.

He soon became a gifted painter and said, "it's all about having the second eye. At the beginning, when I saw a flattened tin I saw in its shape the face of a man or the headscarf of a woman, while "non initiated" people only saw an object." Then he tried to use these discarded objects to represent his artistic vision.

"On the morning of February 1994, my uncle, who was then the driver of the director of the French cultural centre, came to my workshop and saw my paintings. He was immediately interested and he promised to tell the director about it. A week later I was surprised to see François Belorger, the director, in my workshop. After visiting the workshop he was charmed and he announced the organization of an exhibition to show my art. This was my first exhibition and it was a success."

One painting was particularly liked by the public. The artist had made it with cigarette butts and called it "Marie Megots" (Mary's cigarette butts). The director who replaced François Belorger bought it.

That same year, Mamadou Tall Diedhiou was selected by a jury to take part in the "Biennale des Arts Contemporains de Dakar" which is a forum for the promotion of the Senegalese and African artists. His art caught the attention of many personalities and he was selected for an exhibition in Hauts de Garonne, France. There, he toured schools teaching the French kids how to make birds from recycled objects.

When he came back to Senegal he was visited by a TV5 (one of the biggest TV channels in France) team, who came to make a short film about his art. Next came Catherine and Bernard Desjeux (French freelance journalists) to make a film and a report about his art.

When I asked Mamadou Tall Diedhiou about his artistic vision, he refered to a dual aspect in life: the external aspect of things and the deep side, which is where a piece of art is realized. Because, he said, creatures have been created differently, some people can see things that others cannot see. This is why an artist has two ways of seeing: the common way and the "second eye" that is, the look of the "initiated." It is this look that permits the artist to see in a discarded object or an old piece of wood, a beautiful bird and use his talents to materialise it, whereas the untrained eye would not have seen it. This is why,according to Tall, art is not only a means of expression, communication, and decoration, but it is even therapeutic.

Then we came to recycling.

Tall defined recycling saying, "It is the action of picking up and reusing what could be wasted otherwise. Which means that when the artist recuperates [recycles] something, he is giving a second shape, a second breath; in a nutshell, he is calling back to life objects that were doomed to a certain death."

"It was after the [showing] of Marie Megots in my first exhibition, that I saw the opportunity of using [recycled] objects in my art." This was how he came to use a certain number of old, nameless, things in his art. This is what made him known for his originality. It was before he came to making birds. 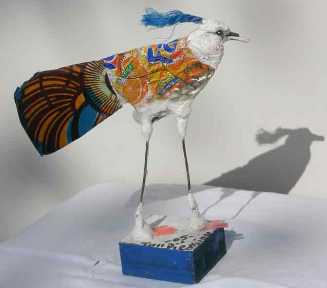 The obsession with birds is a direct influence from the artist's native village. As he put it, "My passion for birds comes from my village, Niomoune. It is a small picturesque village populated by all kinds of migrating birds, in all seasons. They make their nests, fly in and out, and all the time keep the village animated with their songs." Observing these birds must have been of a great influence in the art of Diedhiou as he succeeds to captures the various positions of birds in their daily preocupations, their habits and behaviour. As he said: "I have seen all kinds of birds. This influenced my creation. Birds can be so active and busy, this is why I probably was the only one to think about the fate of the birds in the forest as militaries and rebels started destroying their homes with their rockets and machine guns in their crazy destructive war. It was so sad." This inspired him to write a poem entitled "Sad Birds."

CASAMANCE,
Noble land of dark forests!
Your sacred woods and their burnt trees
Have shed so many tears!

When fighters blast their weapons,
Gunning down men, women and children
Overcome with fear,
The flocks of birds singing to their LORD
Turn their gleeful songs into mournful weeping
And deprived of the leaves of the Giant Trees
They pray upon the ALMIGHTY
To punish their tormentors

Day in, day out
In the past splendor of the Green Forest
Where the wooden containers
Filled with devine secrets used to be,
People, by the hundreds, meet with Death.
For canons are blasting,
And carbines spit fire
And trusting the LORD
With all their unshakeable faith
They walk, as in holocaust,
Towards their sad fate.
Now toads, horrified, hush;
Waiting for the uproar to die down.

Where are the antelops,hyenas,rabbits
Tigers,panthers and feared lions gone?
In the woods, overcome with terror,
Every beast, in his home, hides.
And Casamance, tormented
Bombed,
Is watching as her land is destroyed,
And her children sacrificed.

Cemeteries get larger, widen,
To receive those who perish.
And to the ALMIGHTY EMITEY,
The crteator of the UNIVERSE
The survivors pray for FREEDOM
And PEACE.
All over the Natural Region in tears,
The birds no longer sing aloud
For now they are sad.

The Bird Maker
Produced by Cheikh Darou Seck, a filmmaker and teacher from Senegal.

His obsession with birds originated in the small village of Niomoune. As he says, "My passion for birds comes from my village, Niomoune. It is a small, picturesque village populated by all kinds of migrating birds in all seasons. They make their nests, fly in and out, and all the time keep the village animated with their songs."

MY HERO was so impressed with Cheikh Darou Seck's poignant film and Mamadou Tall Diedhiou's beautiful birds, that Mamadou's works of art serve as the trophies for the MY HERO SHORT FILM FESTIVALS.

Click here to listen to the Mamadou Tall Diedhiou story.