Since 1971, Doug Miller has painted over 14,000 paintings and has taken almost 500,000 photographs [he doesn't count digital] since he began documenting Laguna Beach and its inhabitants. An amazing feat, an arduous task, or a personal zen meditation- one might inquire? Or does the answer lie in Doug Miller's own words: "I have given myself compulsive disorder. I have to paint everyday without missing a day."

Doug Miller's Laguna Beach landscapes and neighborhoods are painted in a style that might be termed lyrical realism. They are lovingly portrayed and they are imbued with atmosphere and mood at the same time. Working patiently but quickly, Doug is able to complete two or three paintings a day. He documents each painting in his well worn journals and he has numbered each painting as well. His collectors appreciate his meticulous documentation as one can easily see Doug's artistic progress over all these years by placing earlier works next to newer pieces. His work is more accomplished by the day!

An exhibitor at the Sawdust Festival since 1971, Doug is self trained. He was appreciative of his great aunt, Anne Robinson, was a plein air landscape painter of the Laguna coast and of the hills of Trabuco in the 1930's. Doug's subject is Laguna Beach, the California Coast, and the natural beauty that lies therein. Doug does not drive but walks the streets and the beaches of his adopted hometown since 1971. He gets his inspiration from his familiarity with location. He has also captured on canvas the meaningful events in Laguna Beach like the 9/11 Vigil at Main Beach and the 4th of July celebrations. 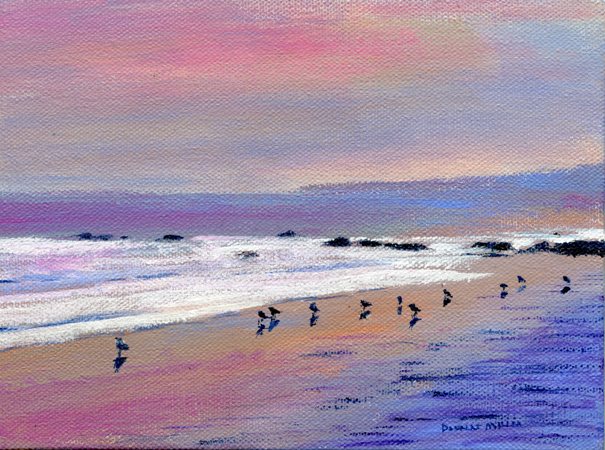 Doug's work usually ranges in size from 3½ x 5 inches up to 14 x 18 inches, as well as some paintings as large as 4 x 6 feet. He has also done many murals, including the 5 x 12 foot mural of Main Beach in the Laguna Beach Chamber of Commerce building. His work is affordable and his inventory moves quickly during the summer months at the Sawdust Festival. Visitors and residents alike appreciate the beauty, the romance and the affordability of his lovingly produced works. His photo cards are also on sale at the Festival.

Doug has taken photographs of Laguna residents since the early 1970s and in that time he has seen his subjects grow up, get married and have children, and all of this is recorded by his camera. He says that photography "plays with time" and that it "creates circles upon circles" which refers to the generations that he has captured through his camera lens. He has lovely photos of mothers and their young children as well as images of proud dads carrying their children on their shoulders around Laguna - and kids in shopping carts at the market. After the devastating fires of 1993, Doug was able to replace many families' memories by reprinting photos from the negatives that he had taken. Many in town were very grateful for his meticulous recording of the names of his subjects and the date each photograph was taken.


Doug has a huge heart and that is apparent in all his interactions with people and especially children. Doug has two sons, Jesse and Josiah, with his wife Rebecca (Becky) Miller whom he met in 1978. They were married at the Sawdust Festival under the waterfall in 1979. He is a successful artist and he has been able to support his family and make a living in the town that he adores and reveres in his works. That is an accomplishment! 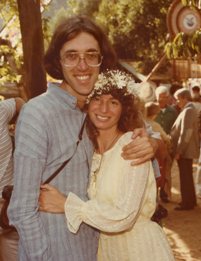 Another important aspect of Doug's creativity is his violin playing. Doug Miller accompanies chanteuse Sasha Evans at the Coach House and at local benefits for the ocean and the homeless. Doug and Sasha's past performances can be viewed on You Tube as well. 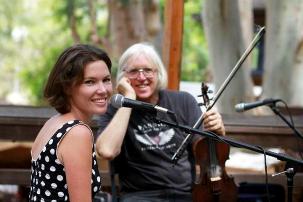 This spring, Doug Miller will be celebrated as an Artist Hero at the Laguna Hero Fest on May 23, 2013 at the 7 degrees venue in Laguna Beach. His beautiful canvases will be exhibited and he will play his music at the event as well. Doug has touched many people's lives with his kindness, his creativity and his indomitable spirit. Doug Miller is unique and he will be celebrated for his pioneering art career and his commitment to making art his way!

The Sawdust Art Festival - is a non-profit organization dedicated to education the public and promoting the art created in Laguna Beach.
More about Doug - from the Sawdust Festival
Doug Miller - story by The MY HERO Team