"Be the change you want to see in the world." Mahatma Gandhi

Sasha Earnheart-Gold is a young man that walks on this earth with purpose. He has always had a strong will and sense of where he wants to go and what he wants to do. For starters, at the age of 14 he decided he would like to homeschool for high school. This led to him trekking through Nepal with some friends at age 15, which led to his starting Apple Tree International…the foundation that helps poor villages in Nepal and Bolivia plant and maintain their own apple trees.

His parents were initially concerned about his idea to homeschool but became supportive as they watched and participated in his learning journey. To Sasha, homeschooling did not mean mimicking school curriculum at home. He said, "The exercise for me was trying to, from a blank slate, envision the best possible education for me. It would be different for everyone. I re-evaluated as I went along and it's provided good lessons in how I live." MY HERO asked Sasha to explain how homeschooling worked for him, what a typical day would look like. But it seems that no day was typical in his learning experiment. "I wanted to make use of the artists, authors, biologists and generally interesting people that live in my small town, Bolinas, that's about an hour north of San Francisco." With a laugh he told me, "Bolinas is a place that newspapers come to when they need filler stories…they call it the town that was lost in time. So I had an apprenticeship with a furniture maker who has work displayed in the Smithsonian. Classes with a Professor of Shakespeare…one-on-one for half a day at a time. I helped monitor the activities of great white sharks with biologists working on southeast Farallon Island Research Station in the Pacific Ocean. I had a class with a writer who has had multiple sclerosis for 20 years. He continues to write…I was his hands and ears. He would talk and I would transcribe. That was English class. I am writing a book about my high school experience. Sometimes I wondered if I was learning, but it sunk in on a much deeper level. I absorbed their personalities and how they lived their lives and their discipline."

So how did Apple Tree International begin? When Sasha was 15, as part of his study program, he found himself trekking with some students through the Himalayas, from Mt. Kailas in far western Tibet back into Nepal. "Every day I encountered starving children with bone thin arms and bloated stomachs. One day a woman approached me, clutching a small infant in her arms. The baby had been suffering from diarrhea for 3 days. 'Is there anything you can do for him?' she asked. 'He will die soon,' the other Nepalis explained nonchalantly. It seemed that this was a common fate for young children. I had seen such poverty while travelling through other areas of Asia but now, having lost 20 pounds and suffering from parasites myself, I saw these children in a way I never had before. I wondered if I could be of service to these people." Shortly after this experience, Sasha came upon a village where the children were not starving but playing happily around some apple trees in the village square. They were also eating the fruit as they played. Sasha thought about the other villages he had passed and how they could benefit from apple trees like these. He thought back to his apprenticeship with a master agriculturalist, part of his homeschooling education. As part of that apprenticeship, Sasha had learned how to graft and propagate fruit trees. He thought about how those skills could be of use to the villagers. Upon returning home to California, he determined to help the starving villagers. "I gathered people with the expertise and experience that I needed to assist me in this endeavor." And Apple Tree International was born. "The idea is to train farmers and others in fruit and new tree propagation techniques. The average yearly family income among families we work with in Nepal is $200 US. Apple trees provide so much beyond their own fruit. They can be grafted to propagate more trees, their fruit can be sold or traded which in turn provides other food, clothing and fuel to boil and purify water."

Apple Tree International has worked with up to 20 villages at a time. And Sasha explained how they set it up. "In each village we taught grafting workshops, attended by between 20 and 30 individuals. Each participant agreed to teach 2 other people how to graft and propagate fruit trees. We also required that half the workshop participants were female and half male." In order to have these villages reach the ultimate goal of self-sustainability, they have been working with local partner organizations in Nepal and Bolivia. The thousands of trees shipped from the volunteer nursery in Bolinas have acted as "parent trees", providing scion (variety wood) for on-site propagation. Sasha informs me that, "We have established local root stock nurseries on-site to provide locally available hardy rootstock of both native and domestic varieties. "I hope to return to these areas when I am an old man and see well-fed children climbing in the branches of large apple trees in every village, a well established, widespread, self-sustaining addition to the agriculture of the region."

Sasha tells me the volunteers from Bolinas, ranging in age from 14 to 76, have benefited from being exposed to this kind of participation in life: All the planting and mulching and watering and grafting of new trees to replace the ones being shipped. "These are not abstract models or economic constructs that are difficult to understand. This is hands in the soil, caring for living plants which carry our care and hope to many hungry people. Again and again I have read in letters from our donors and heard in the conversations of our volunteers - 'Yes! This is the way it should be done. Simple and direct, from our hands to your hands, working together.'"

Sasha Earnheart-Gold, the homeschooler, is just about to graduate from one of the oldest universities in the US, Dartmouth. It seems that several people in their admissions office liked what they saw when his 40 page application, including letters from his "high school" mentor/teachers and a description of his foundation operating in 3 continents, came in. He has spent the last year focusing on a senior fellowship given to only a handful of students each year by the President and trustees of Dartmouth. The lucky students get to do their own projects for the year instead of classes. Sasha chose to spend his year collecting testimony from the elders of the Arctic and low lying islands in the South Pacific about the devastating affects of global climate change. He worries because, "Within my lifetime, we may see entire island nations in the Pacific disappear beneath the water, their citizens becoming environmental refugees. As the Arctic rapidly melts, we may see the disappearance of Inuit culture and the indigenous knowledge that is based so centrally around life on the ice and snow. The Polar Bear may also become extinct. It is incredible to see how our individual actions and the actions of our country affect the lives of people halfway around the world. The climate changes that are affecting others first, will also affect us. These changes require global cooperation and action."

Looking back on this time, he said, "My interest was to see how to use the existing legal structure to pressure governments to be more proactive about climate change." Sheila Watt-Cloutier, elected Chair of the Inuit Circumpolar Conference, made use of his findings as part of her Petition to the Inter-American Commission on Human Rights. The Petition asserts that the Human Rights of the Inuit have been violated by acts and omissions of the United States relating to greenhouse gas emissions. The Petition was presented at the United Nations Framework Convention on Climate Change COP 11 meetings in Montreal in December, 2005. She said, "There are three basic messages from the Arctic:

2. climate change in the Arctic is quickly going to get worse; and

3. climate change in the Arctic is important globally."

So, what does the future hold for someone like Sasha, now that his Apple Tree Foundation is reaching sustainability? "I'm thinking more about international law, writing, politics. We'll see what happens. I just need to finish my degree." He is becoming interested in doing other projects. One of them is "providing opportunities for kids from remote areas to go to university." For a student from a remote district of Nepal to go to university in Kathmandu would cost under $1,000 for each student per year, including room and board and tuition.

What brings you joy? "I think we're all trying to figure that one out. A few things. One of them is being in beautiful places outdoors. The natural world." It would seem that he learned his love of nature from his mother, Lea, who he says is very in touch with the natural world. And his late father Bob Gold surely instilled his visionary ways in his son. He also gave him a book when he was a boy that seems to have played a large role in his life… The Man Who Planted Trees by Jean Giono.

I'm sure you have met a lot of amazing people. Would anyone qualify as your hero? After a very long pause, he replied, "I think the trees. Working with so many apple trees you have to gain respect for the trees and kind of an understanding with them."

What would you do or say if you had the attention of the world for 10 minutes? "Showing does more than talking at people. If I could guarantee by showing nothing that they would have a blank mind for 10 minutes, then maybe new original ideas could come in."

To contact Sasha Earnheart-Gold, and/or get involved with his work, write to him at: 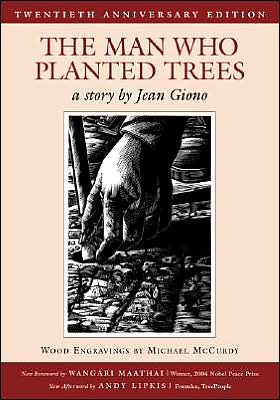