by Wendy Milette and Jeanne Meyers

Esther Wojcicki and her book, Moonshots in Education (photo by John Behrens)
Esther Wojcicki is a pioneer in education who has spent 30 years building an outstanding high school journalism program at Palo Alto High School. Her book, “Moonshots in Education: Blended Learning in the Classroom,” provides an important platform for a global education movement devoted to radically improving teaching and learning around the world.
Engagement is a worthy goal in any educational institution. Esther Wojcicki, Journalism Teacher and founder of the Media Arts Program, believes that students deserve to be in charge of their own learning.

“If you believe in them, they believe in themselves. Basically what I do in class is to apply TRICK, which stands for: Trust, Respect, Independence, Collaboration & Kindness, which is what I think belongs in every class.  You can’t do anything without trust.” 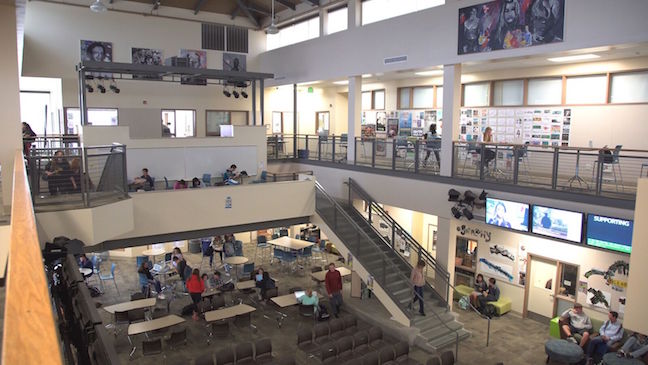 Media Arts Center at Palo Alto High School - John Behrens
Walking through the doors of the Media Arts Center at Palo Alto High School is like stepping into the future. Students are completely engaged in what they are doing. The open-aired room is filled with passionate learners, some deep in conversations with peers collaborating on projects, some reading, researching and (even) resting; everyone is self-directed. These students are involved and happy.
Esther started teaching at “Paly” High in 1984. A year later, she started a journalism program with twenty students. Over the past thirty-one years, she turned it into one of the largest and most successful programs of its kind in the nation. Today, the program has more than 500 students who choose classes in five media specializations: newspaper, magazine, web, television, and a sports magazine. Each of the programs is an award winner.

“I’m not just teaching journalism, I’m teaching skills for life, how to adapt in the 21st century, how to use technology, how to find information.” ~  Esther Wojcicki - 2016

Esther is more than just a teacher to these students. She creates a home-like environment where students stay long hours after school and even on the weekends.

“I’ve learned so much from Woj, not just about journalism but about life. I just love being around her in this sanctuary of journalism that she’s created. She showed me that that what I want to do with the rest of my life is to start things, I want to be there and I want to watch things grow."
~ Frida Schaefer Bastian, Editor of C-Mag, Graduating Senior,  Paly 2016 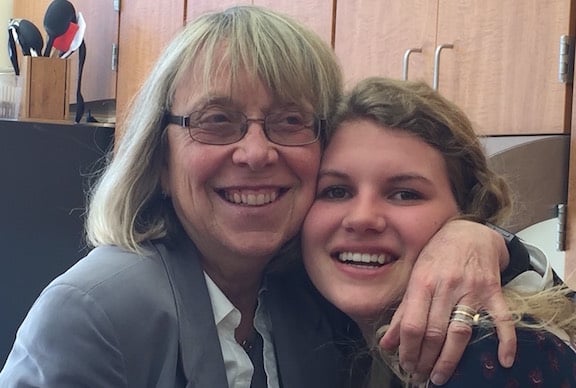 Esther Wojcicki with graduating senior Frida Schaefer Bastian - photo by Jeanne Meyers
The students spend time writing, producing, and editing each other’s works to create numerous publications that are distributed throughout the Palo Alto community. Esther has created a mentoring system, in which students teach and learn from one another other, freeing her up to coach from the sidelines.

“As an advisor, part of her role is to know (actually) when to step back. This is very important because when you have a student-run publication that is intended to express the views of the students, you don’t want someone who is trying to impart their own views on the publication.”
~ Jeremy Fu, Senior Staff Writer - Campanile, Graduating Senior ~ 2016

The success of the program is reflected in the numerous awards that these student-run publications receive. To name a few; the Hall of Fame Award and the PaceMaker Award from National Scholastic Press, Gold and Silver Crowns from Columbia Scholastic Press Association, and Time Magazine’s best in nation award in 2003. The program’s website won two Webby Awards in 2005.
Esther’s hope is that Moonshots in Education, Launching Blended Learning in the Classroom, will provide the platform for a MOONSHOT MOVEMENT. Why Moonshot?

"In 1961, President Kennedy said we are going to the moon not because it’s easy but because it’s hard and it’s going to take a community and a lot of hard work to get there, and we did it, we got to the moon be the end of the 60’s. And so, moonshots in education is the same concept, it is really tough to change the culture of society and tough to change the way we’ve been teaching for 500 years, and we are doing it because it is hard - but it is going to make a difference.

And so, we need to stick with it and work together as a community. Parents, teachers, the whole society has to realize that if you give kids some control in the classroom they will have all the creativity, critical thinking and communication skills that you want - that is the key to making a difference." ~ Esther Wojcicki -2016 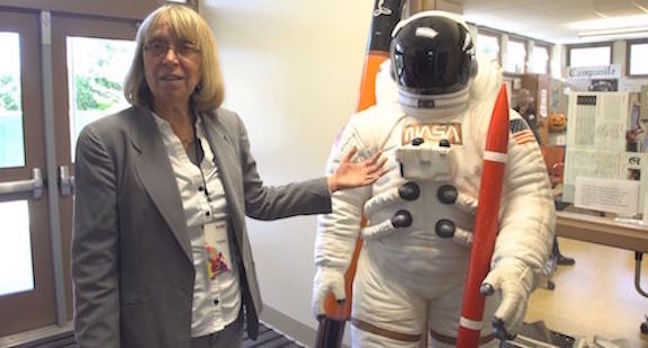 Esther Wojcicki - photo by John Behrens
Wojcicki has traveled around the world to promote her moonshot movement, including; United States, Latin America, Middle East, Africa, Asia, Australia, Japan & Europe. People from all over the world visit her Media Arts Center to learn more about her model program. Esther is dedicated to transforming how we teach kids all around the world.

"I’ve been promoting the idea of a moonshot movement in education to change the pedagogy of teaching everywhere not just in a few parts of the world but all over the world so that all students and teachers are prepared for the 21st Century."  ~ Esther Wojcicki -2016

Esther’s advice to teachers who are struggling to meet the demands of the current system is to start small by implementing Moonshot Mondays, where students are given 20% free time to work on projects of their own choosing.

“If we are trapped in the traditional method of using textbooks and multiple choice tests, then we don’t have time to be innovative. That’s why we need to provide some time where students can actually be innovative.” ~ Esther Wojcicki – 2016 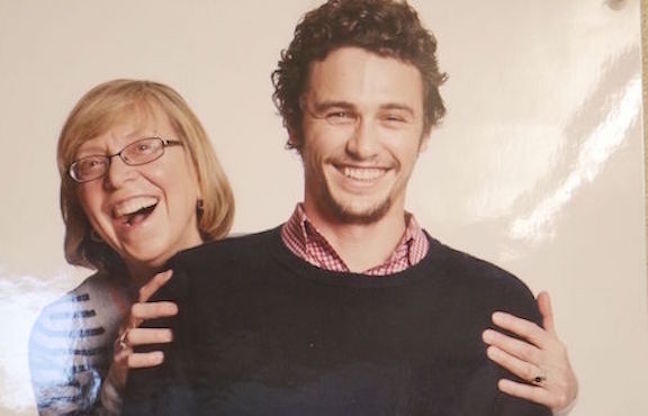 Wojcicki and former student James Franco - photo courtesy of Esther Wojcicki
One of Esther’s Moonshots was to teach students how to make a film by actually making a film. Former student James Franco was enlisted and has devoted weekends to working with a select group of students in writing, producing, shooting and editing a feature film, while Esther looked on as advisor and Executive Producer. The film is based on the book, Metamorphosis, written by Betsy Franco, James’ mother and is being co-produced by James’ brother Tom Franco, a true family affair. 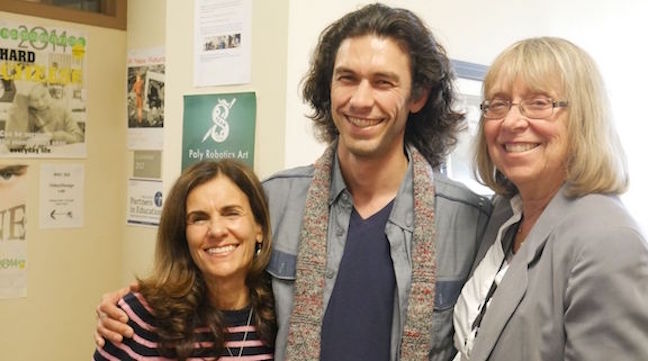 Betsy Franco and Tom Franco with Esther Wojcicki - photo by Wendy Milette
Esther was met with a great deal of resistance from the community when proposing this opportunity for students to work with professionals in making a feature length film. She would not take NO for an answer, however, and with a great deal of persistence and perseverance she forged the way to make it happen. This is consistent throughout her career, once Woj sets her mind on something there is no stopping her.
Esther Wojcicki’s commitment to transforming education serves the greater purpose of developing connected and caring human beings. As this moonshot movement takes a hold, we can expect to see a new generation of citizens in the world who treat each other with trust, respect, independence, collaboration and kindness.
Background:
Wojcicki’s parents were Russian Jewish immigrants who immigrated to the United States in the 1930s. Esther was the first member of her family to attend college and graduated from the University of California at Berkeley with a Bachelor’s degree in English and Political Science and a Master’s Degree from U.C. Berkeley’s Graduate School of Journalism. She holds an advance degree in French and French History from the Sorbonne and an M.A. in Educational Technology and Secondary School Administrative Credential from San Jose State University.
Wojcicki and her husband Stanley Wojcicki, a Professor of Physics at Stanford University, have raised three daughters. Their daughter Anne is co-founder of 23andMe, a genetics testing and research company. Susan is the CEO of YouTube and Janet is a PhD, a Fulbright Award winning anthropologist and an epidemiologist. The couple has eight grandchildren.
Esther serves as Chairman of the Board of Learning Matters and is on the THNK School of Creative Leadership’s Advisory Board. She serves as Vice Chair of the Board of Directors of Creative Commons. Wojcicki, or “Woj” to her students, has written for several publications and writes a recurring blog for the Huffington Post. 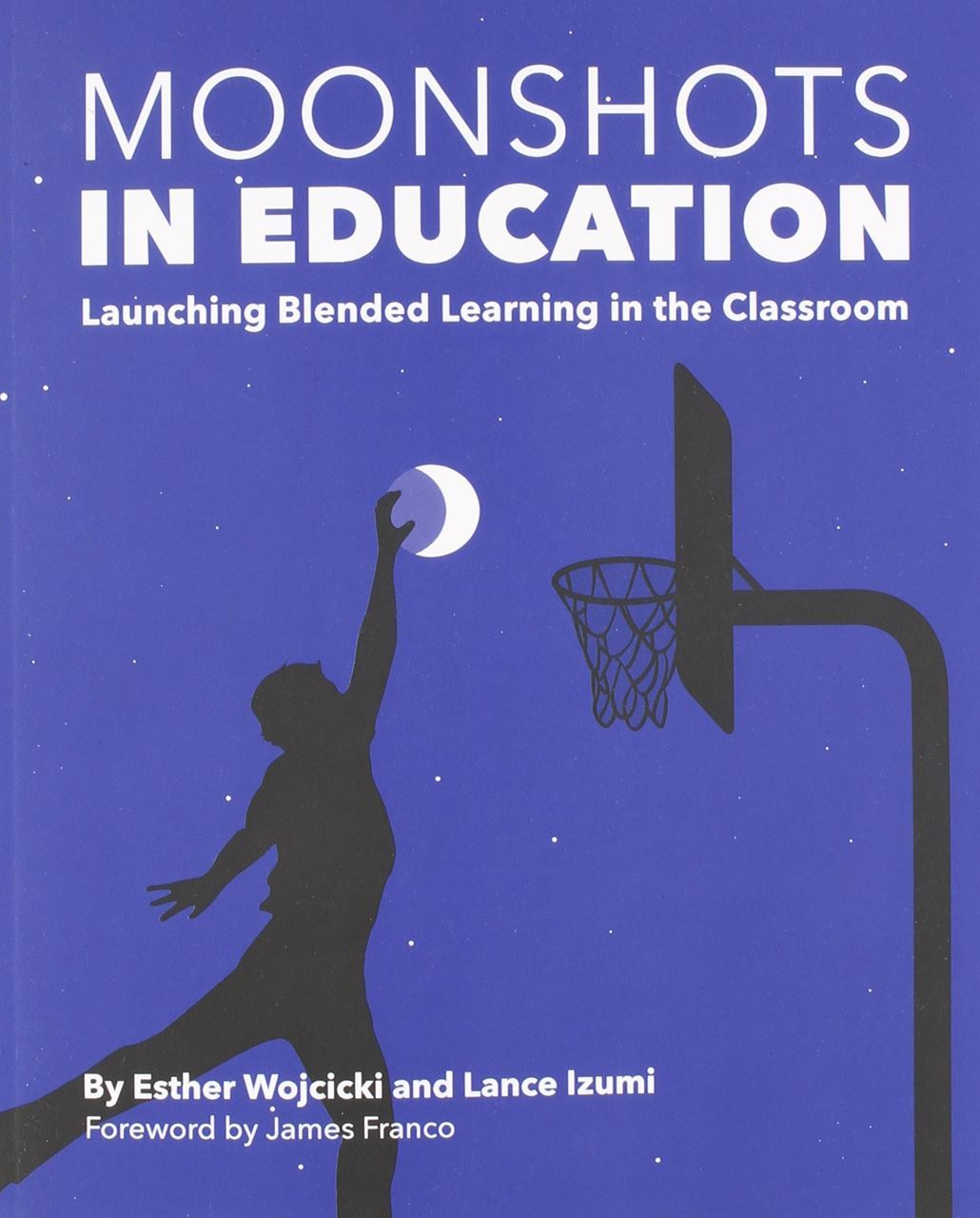