by Zach from Seattle

". . .this fragile earth deserves a voice. It needs solutions. It needs change. It needs action."

In 1971 the Don’t Make a Wave Committee, a group of only eleven men, voyaged to Amchitka Island to stop the US government sponsored nuclear testing that was supposed to happen in the Aleutian Islands. Today, this group is better known as Greenpeace. They came up with the name Greenpeace when someone flashed a peace sign as they were leaving a church after explaining their mission. They decided to name the organization from the peace sign and from the earth. But there is something unusual about this organization. How often does a group of environmental activists put their lives on the line? Greenpeace has several times. They are activists, not just environmentalists.

Greenpeace’s voyage to Amchitka Island to silently protest US nuclear testing off the coast of Alaska took place over 30 years ago. Although the crew never made it to Amchitka, they succeeded in bringing worldwide attention to the dangers of nuclear testing. The US abandoned the testing soon after.

David McTaggart, who was actively involved in creating Greenpeace, led another project to stop the French government from testing nuclear weapons in Moruroa. He sailed to the zone surrounding Moruroa Atoll in the Pacific, downwind from the planned blast. A French naval vessel rammed his boat to end the stand-off. McTaggart returned to Moruroa a year later, and this time he was beaten. The nuclear testing still took place, but once again, the media caught on, because some of the crewmembers had taken photographs of the voyage and the actions by the French military.

Greenpeace has helped the environment in many places. They started in the US and Canada. Most of the people on the Amchitka voyage were Canadian. Today, people from forty-one countries around the world participate in Greenpeace. A few of these include the UK, Argentina, India, and even small countries like Cyprus. Right now, they are called Greenpeace International.

Currently, Greenpeace is at work on a number of different fronts to protect the environment: catalysing an energy revolution to fight climate change, defending our oceans, protecting the world's ancient forests, working for disarmament and peace, creating a toxic-free future, and campaigning for sustainable agriculture.

Greenpeace is my hero because I think that someone needs to help the environment and Greenpeace does this in different and more effective ways than most organizations. Unfortunately, the government has done little to preserve the earth; it is up to concerned citizens to take action. No other environmental organization has taken such great risks. Some of Greenpeace's projects have gotten their members arrested, but that did not stop them. Who knows where the world might be without them?

Greenpeace inspires me because I support the environment and efforts to preserve it. I have learned that sometimes it is worth it to take risks. I do what I can for the environment, but Greenpeace has inspired me to do more.

Greenpeace has helped the earth recover from the damage that has been done to it and that is why this organization is my hero.

Greenpeace International - is an independent global campaigning organisation that acts to change attitudes and behaviour, to protect and conserve the environment and to promote peace.
"The Circle Game" - Listen to this song from a two-disc live concert CD called Amchitka, the 1970 concert that launched Greenpeace, featuring performances by Joni Mitchell, James Taylor and Phil Ochs, available exclusively through Greenpeace at www.amchitka-concert.com.
Amchitka, the 1970 concert that launched Greenpeace 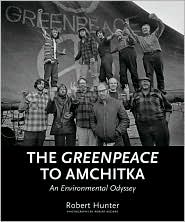