"It is a wonderful truth that things we want most in life — a sense of purpose, happiness and hope — are most easily attained by giving them to others."

Isabel Allende is a Chilean-American novelist - though she was born in Lima, Peru on August 2, 1942 - who is considered one of the first, and most successful, eloquent, and admired female novelists in Latin America.

She writes in the style dubbed ‘magic realism’ in which magical and mythical aspects or scenes are present in otherwise normal, realistic settings. This genre is shared by other greats such as Nobel Prize winner Miguel Angel Asturias, Jorge Luis Borges, Juan Rulfo, Carlos Fuentes, and Gabriel Garcia Marquez.

Several of Allende’s great works of literature, such as The House of Spirits and City of the Beasts have been translated into a number of languages, in some cases as many as 30, and have sold over 50 million copies. A few have even been made into films, three of which are currently in production.

Although her work is saturated in magic and myth, and evidently as such, in her wonderous imagination, her work method is instead drenched in incredibly methodical realism. She types on a computer from 9am-7pm, 6 days a week until her project is complete -- and always starts on January 8th. This is the day she considers the 'luckiest' in terms of her career, as it was the day she wrote the first of many letters to her dying grandfather, which ultimately became the novel House of Spirits.

As prolific and beloved an author as she is considered, Allende’s persona transcends this role, namely through her passionate involvement in the foundation she created. The Isabel Allende Foundation, over a decade old, is focused on achieving a world in which women and girls have economic and social justice, empowerment, and protection.

Considered a hero by many, both in her native Chile and around the world, Allende considers those women who care for others and support their families, despite struggling with poverty and abuse, her own personal heroes.

This becomes clearly evident in her novels, in which she often focuses on the experiences of women.

Her own life experiences also give a greater depth to her work. Her father, Tomas Allende, was a Chilean diplomat in Peru, and the first cousin of Salvador Allende, President of Chile from 1970-1973. When Tomas “disappeared” in 1945, her mother Francisca Llona Barrios relocated the family - herself, and her three children - to Chile, then briefly to Bolivia and Lebanon. They returned to Chile in 1958 so that Allende could continue her education there.

Allende married in 1962, and though she had two children she adored, Paula and Nicolas, she is said to have been torn between her submissive role at home with her husband, and her public popularity as a television personality, writer, and feminist.

On a humorous note, she also worked briefly at translating romance novels from English to Spanish, but was fired for making unapproved changes that made the female protagonists appear more intelligent, independent, and charitable.

Allende’s wide genre of work experience has included everything from serving as a magazine editor, writing children’s stories, serving as a television producer for a number of programs, working as a newspaper journalist, and even as a school administrator. She also worked at the UN’s Food and Agricultural Organization in Chile and then in Belgium, and throughout Europe.

Interestingly, as a journalist she had hoped to interview famed Chilean poet Pablo Neruda. Instead, he refused, telling her that she had too great an imagination to be a journalist, and should instead be a novelist. He encouraged her to turn her satirical columns into a book format, which ultimately became her first published book.

The military coup that brought the dictator Pinochet to power in 1973 unexpectedly thrust Allende into a different position -- that of helping those on the newly-created ‘wanted’ list escape, until she found herself on it, as well, and had to flee to Venezuela where she lived for 13 years.

Allende’s life had evidently changed in dramatic ways throughout the years, and in 1988, during a visit to California, she met her second husband, a lawyer and novelist with whom she still resides in the San Francisco Bay Area, now as a U.S. citizen. There she is surrounded by most of her family, including her son, son-in-law, and grandchildren.

Adding to her vast and varied work experience, she has even taught at various U.S. universities.

Her literary star has also continued to shine despite the personal trials she endured, and in 1994, she was honored with the Gabriela Mistral Order of Merit, becoming the first woman to ever receive the prestigious award. She also received the Dorothy and Lillian Gish prize for writers. In 2006 she was even one of the 8 flag bearers at the Opening Ceremony of the Winter Olympics in Italy! In 2007 Latino Leaders magazine named her the third most influential Latino leader.

Isabel Allende’s appeal transcends cultural and language boundaries and is based on the great literature she produces, the charitable work she cherishes, and the ceaseless and boundless imagination she possesses.

The Isabel Allende Foundation - is a grant-making foundation created as a tribute to Paula Frias, Isabel's daughter, who volunteered in poor communities in Venezuela and Spain before her death in 1992.
Isabelle Allende's Official Site - includes photos, information on books, lectures, and interviews, a biography and timeline, and more. 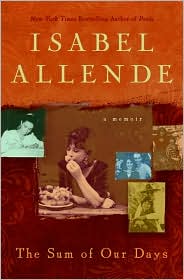 The Sum of Our Days: A Memoir
Isabel Allende
Related pages