by Claudia from Costa Mesa 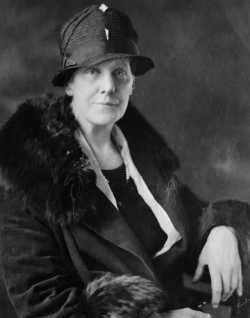 Anna JarvisOlairian / Public domainThe women of the Jarvis household possessed a vibrancy and passion towards activism not typically seen in the majority of women of their time: the 1900s. Though there were, in fact, several reform movements that women were engaged in during that time period, including the temperance and suffrage movements (both of which the Jarvis women participated in), most women solely devoted themselves to homemaking. While most women were happy focusing their lives solely on their family and home, the Jarvis women were on a crusade not to discredit or diminish the role of the homemaker, but to instead ensure that these very women were recognized and honored in their work as mothers. Thus, the mother of the household, Mrs. Ann Marie Reeves Jarvis, helped develop the “Mothers Friendship Day” to assist in the healing of the nation after the Civil War, and to establish a reconciliation between those who had been on opposing sides of the war. Upon Mrs. Jarvis’ death in 1905, her daughter, Anna, decided to dedicate her life to her mother’s life work and to establish Mother’s Day to “honor mothers, living and dead.”

Miss Anna Jarvis was born in Webster, West Virginia, on May 1st, 1864, as the ninth of eleven children born to her mother, a schoolteacher, and her father, Granville Jarvis. The family moved to nearby Grafton when Anna was an infant, and there Anna spent her childhood. She attended college in Virginia and then returned to Grafton to become a teacher as well. From her childhood she remembered how important the cause of establishing a day of recognition for mothers was to her own mother, particularly from a school prayer she had led when Anna was twelve years old. Mrs. Jarvis had closed her lesson with a prayer which stated “I hope that someone, sometime, will one day establish a memorial mother’s day commemorating her for the matchless service she renders to humanity in every field of life.” This prayer so stayed with Anna, and it's reported that Anna repeated it at her mother's grave upon her passing, vowing to dedicate her life to her mother’s righteous cause.

Though the exact dates vary slightly from source to source as to when these actual events took place, the fact is that Mother’s Day was established by the determination of a loving daughter who would have worked as long as necessary to fulfill her mother's dream. Miss Jarvis worked diligently, writing countless letters to influential people and distributing pamphlets to gain recognition for motherhood. She spent most of her fortune on the cause, but thanks to her efforts, the first Mother’s Day service was held on May 10, 1907 (though some sources state 1908), at her mother’s church, St. Andrew’s Methodist Episcopal Church in Grafton. She passed out more than 500 white carnations, one for each mother in the congregation. She chose carnations because they were her mother’s favorite flowers; the white carnation was her most favorite because it represented the purity of a mother's heart. A white carnation was to be worn to honor deceased mothers, and a red one to honor a living mother.

Miss Jarvis continued ceaselessly campaigning for her cause, sending her appeals to people of influence, yet was generally overlooked until John Wanamaker, a great merchant and philanthropist from Philadelphia, joined the campaign. With his added influence and support, the movement grew. In 1908 the first bill was presented to the U.S. Senate proposing the establishment of Mother’s Day, but it was defeated. Miss Jarvis was able to recruit the World’s Sunday School Association to lobby for her movement, a key success factor in convincing state legislators and Congress. By 1912 West Virginia became the first state to adopt an official Mother’s Day, and by 1914, Congress passed a joint resolution, signed by President Woodrow Wilson, to establish Mother’s Day.

Despite all the joy surrounding her successful campaign, all was not bliss. Miss Jarvis became very concerned with the steadily increasing commercialization of Mother’s Day and opposed the selling of flowers and the use of greeting cards. She felt that her holiday, which was meant to be a “noble and true” celebration, had been exploited for profit. Miss Jarvis was concerned with reform, not revenue.

The Mother’s Day movement was not considered in any way against the women’s reform movements, although it became established during the Progressive Era (1900-1920). Instead, it was a celebration of the importance of women and their work inside the home, as mothers. Activists, just like Miss Jarvis, stepped outside the typical home sphere of the time, but neither rejected the role of homemaker, nor discredited it. Instead, their very involvement as activists brought the role of mothers and homemakers into the public view -- giving it positive publicity, recognition, and public respect.

Anna Jarvis, along with her mother of course, is a hero because of her determination, perseverance and resilience towards her causes and beliefs. She is also a hero because of her devotion, love, and loyalty as daughter as well as her dedication a sibling, having spent much of her last years caring for her invalid sister. Although ironically Miss Jarvis never had children herself, and thus was not an "official" mother, she is considered the "Mother of Mother's Day," a title as grand as her beautiful cause and her ceaseless devotion. She passed away on November 24, 1948 at the age of 84. The bells at St. Andrew’s Church in Grafton tolled 84 times in honor of her.

This message comes from Christy A. Mullens, Vice-Chairwoman of The International Mother's Day Shrine, Inc.

Anna Jarvis and her mother Mrs. Ann Maria Reeves Jarvis are heroes for many reasons in addition to starting Mother's Day in the United States. While many people may be aware that Anna Jarvis is the founder of Mother's Day, there are two important historical details that need more attention in the history books: First, the mother of Anna Jarvis was the originator of the Mother's Day idea. Secondly, she organized Mother's Friendship Clubs to work in conjunction with local doctors to provide health care to local citizens in her community plagued by diseases such dysentery, small pox, and tuberculosis after the Civil War. She was a hero because devoted herself to helping anyone in need, regardless of their stature in society or their sympathies for either side of the war. At the county seat of Pruntytown in Taylor County, WV, she organized a public gathering to encourage all families to work together and resolve their differences over the war. She dressed in blue and another lady friend dressed in gray. They spoke to the crowd together and Mrs. Jarvis asked that both "Dixie" and " The Star-Spangled Banner" be played by the band.

Mrs. Jarvis, on many occasions said to her daughter, Anna, that she felt women should be given more opportunities to contribute to the community and society. She believed that a balance could and should be met between a woman's devotion to family and her contributions to her community. She and her daughter are heroes because they remained devoted to their causes (bettering women's positions and establishing a Mother's Day) in the face of much criticism, disappointments, and sacrifices. It is my hope that these women will one day receive a more honorable place in our children's history books than they currently do. Many West Virginians do not even know of them and their extraordinary history.

Finally, I would like to mention the International Mother's Day Shrine, located in downtown Grafton, WV. This is the site of the first official observance of Mother's Day, May 10, 1908 at the request of Anna Jarvis. This is the anniversary of her mother's death and Mrs. Jarvis was the first woman ever honored by the day in the United States. Since that time, the church continued to have a congregation until 1962 when it was established as a Shrine to the Jarvis women. The Shrine is a museum housing memorabilia and antique furniture of the Jarvis family. Such items include the pen used by Woodrow Wilson to sign the Mother's Day Proclamation in 1914, letters of family members, the piano used by Mrs. Jarvis to teach music lessons, etc. Gifts and souvenirs are available for purchase at the Shrine or online. There are a number of reasons why the Shrine has been largely unknown to the public to date. Some reasons involve the nature of the development of the holiday itself and the family moving to Philadelphia in their later years. Also, for some time the Shrine was operated by a small group of local elderly women who did not promote the building outside of having a yearly service on Mother's Day Sunday. Current members of the Shrine Board of Directors are looking to promote the building more and to increase awareness about the history and origins of the holiday and its founders. We feel this will be valuable to the community of Grafton, the Jarvis family's hometown, the state of West Virginia, women's studies, and the entire nation.

The Shrine's hours of operation are Tuesday-Saturday from 10:30 to 4:30 and tours for larger groups may be scheduled upon request.