by Nathalie from Houston

Who can you consider a hero? A hero is a person that gave their all to give society equality; and gave discriminated people the strength to express their thoughts and beliefs in a civilized way. Martin Luther King is an example of a hero; studying the Mahatma Gandhi's non-violent strategy for Social change, King did a lot of things for people such as movement rights, demonstrations, marches and many more ways to peacefully express their thoughts and beliefs.

Martin Luther King was born on January 15, 1929 at his home town Atlanta, Georgia. King was a Baptist minister and the leader for civil rights movement. King promoted non-violent means to achieve civil rights reforms. King's goal was to completely wipe out segregation and discrimination within the people, and also in the public aspects such as different restroom, buses, restaurants and so on.

On 1963 King became the "Man of the Year" in the Time Magazine and he also won the Nobel Peace prize on 1964 for his hard work of accomplishing real good job the stopping segregation within not only the country, but on the whole world. During the Vietnam time Martin Luther King talked for the people that were sent to the war because so many of the poor (minority groups and students who couldn't afford to pay college) were sent to the war; Martin stood up for those people by organizing demonstrations and marches. Their were some people who were against Martin's thoughts. One of those persons was FBI Director, J. Edgar Hoover, who had an extensive effort to undermine King's leadership that were intensified during 1967 as urban racial violence escalated.

On the day of the 4th of April 1968, while supporting the striking sanitation workers on a demonstration, King was assassinated. King's final address "I've been to the mountain top." The death of Martin Luther King was a really tragic event for all of the people that had been helped by his actions. After King died, Coretta Scott King and her children continued to accomplish King's dream to end discrimination, and after only weeks after his death Coretta went on a protest; this shows how they wanted to make sure that his legacy still is and will make a change and a different world. Mrs. Coretta Scott King created a "Martin Luther King Center" which helps people to understand King's thoughts and the non-violent way to achieve success in any kind of cause.

Martin Luther King is an example of a great hero that did a lot for the equality and the rights for the people. That's why today we pay tribute to Martin Luther King, the man who has never abandoned his faith in the unarmed struggle he is waging, who has suffered for his faith, who has been imprisoned on many occasions, whose home has been subject to bomb attacks, whose life and the lives of his family have been threatened, and who nevertheless has never faltered. We should be grateful to people like this because for him we have equality within the society; thanks to the effort of Martin Luther King now we can go to a place and sit right beside a person that has a different race and interact with them so we can learn about them and not be discriminating against people for the way they look or talk. 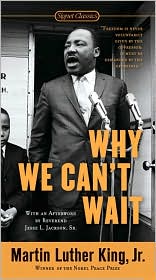