by Natalie from San Francisco

Oscar Arnulfo Romero y Galdamez was born on August 15, 1917 in Ciudad Barrios, El Salvador. He was born into a farming family (his siblings and he worked as campesinos), and his father ran the telegraph and post office. Neither of his parents would have guessed that his true vocation in life was to be a priest. He was a very smart boy growing up, and discovered that he wanted to become a priest after talking to a diocesan vicar who visited town often. His father did not approve of his desire to be a priest. However, he joined a minor seminary in San Miguel, and later in 1930 was sent to the major seminary in San Salvador. That same year, he went to Rome to study at the Gregorian University. In 1941, he received a licentiate in theology. He was called back to San Miguel to work as the secretary of the San Miguel diocese and the pastor of the cathedral. Even though he never got the chance to finish his doctorate in ascetical theology, his rise to success was astounding for a young adult from a minuscule town in a small Central American country.

Throughout the next couple of decades of his priesthood, Romero fulfilled many commitments such as directing the building of San Miguel's cathedral, organizing many charitable activities, and running several Catholic organizations. After that, he was eventually assigned other duties because of his soaring reputation. However, his health was starting to deteriorate as a result of his packed schedule and stress from his job, and he decided to take a short leave from his job. Upon his return, he only became more stressed by being named bishop of the Santiago de María. At this time, he was being criticized for his views about politics and theology, for people accused him as being a "Marxist". However, Romero managed to stay calm and true to his own beliefs. He was named the successor to Archbishop Luis Chávez y González, to the chagrin of people who wanted a man named Arturo Rivera y Damas to be archbishop, but also to the joy of many people who admired him.

Meanwhile, rising tension in El Salvador (in terms of increasing violence and a rather corrupt government) was targeting a lot of clergy members. Shootings of priests and their associates by 'death squads' were becoming more and more common in the 1970's. Killings by the death squads of innocent civilians, and involuntary drafting of young men into the war were happening more and more often as well. Romero passionately spoke out against this violence. One of the things for which he is famous is giving moving homilies on social justice. As Romero faced difficult decisions, he received almost no help from his government or other governments around the world. (In fact, some of these governments supported these death squads.) However, Romero remained a face of hope and goodwill to all who had lost faith in the war-torn country.

In his last homilies, Archbishop Romero sustained a message of hope and justice. In the penultimate homily of his life, he said:

"God's law must prevail that says: 'Thou shalt not kill.' No soldier is obliged to obey an order against the law of God. No one has to fulfill an immoral law. It is time to take back your consciences rather than obey the laws of sin. The Church, defender of the rights of God, of the law of God, of human dignity, of the person, cannot remain silent before such an abomination. We want the government to understand seriously that reforms are worth nothing if they are stained with so much blood. In the name of God, and in the name of this suffering people, whose laments rise to heaven each day more tumultuous, I beg you, I beseech you, I order you in the name of God: Stop the repression!"

The next week, on Monday, March 24, 1980, seemingly a normal day, Romero worked in his office, stopped by his doctor's office because of an ear infection, and stopped for confession because he "wanted to feel in the Lord's presence." Later, he went to the chapel of the place where he lived to say Mass. At 6:25 PM in the chapel of the Divina Providencia Cancer Hospital, Oscar Romero was shot in the heart (by an unknown gunman) while giving a homily, dying a martyr.

Oscar Romero is such an amazing person, words fail to describe him. However, in my research, I came across a great piece of writing penned by a close acquaintance of Romero, Jon Sobrino. "Oscar Romero," he wrote, "is more than an analytical concept or a venerable myth. He was someone very real, someone whom 'we have seen, heard, and touched,' as the first Christians said of Jesus." Maybe this is why so many people view Romero as a hero. In El Salvador, there's a celebration of Romero's life, Romero Week, and a vast number of books have been written about him. I have a copy of a newspaper from 2000 that has articles and columns written about him, even a comic depicting his life!

Romero has affected my life and the life of my family as well, one of the main reasons that he is my hero. My dad grew up in El Salvador, in the age of death squads, rebel soldiers, and terrorizing fear. When he was a teenager, his family would sometimes have to turn off all their lights and hide to avoid the looming threat of guerrillas. He had to flee with his brothers to the U.S.A. to avoid being drafted into the army. In the U.S., he met and married my mother, and they then had me. If not for the situation, I would have never been born, which is a very scary thought. Oscar Romero is a huge role model to my father as well. Before, I didn't know anything about Archbishop Romero, but when my father told me his story, I knew I had to tell it.

SHARE El Salvador - SHARE supports social justice and human rights in El Salvador through philanthropy projects and even has a link about Romero Week (a celebration of Oscar Romero) and how you can get involved!
US Catholic-Oscar Romero - gives some great background information on Oscar Romero.
TIME - has a poignantly written article on his death.

A great source I used for my hero's story was the March 2009 issue of Maryknoll Magazine. I recommend that anyone who wants to learn more about Oscar Romero and the horrors of the civil war read this, because it includes several eyewitnesses' accounts of the death squad attacks. This issue also includes a missionary's account of visiting El Salvador and even talks a little bit about the 2009 elections. This edition of Maryknoll Magazine is a terrific and accurate source.

Thank you also to my teacher, who gave me some great resources (the Romero newspaper, and a beautiful picture of Oscar Romero drawn by a friend of his). I couldn't have done the project without his help and advice. 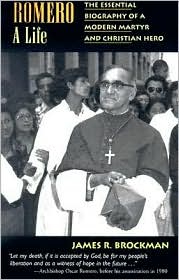 Romero: A Life: The Essential Biography of a Modern Martyr and Christian Hero
James R. Brockman 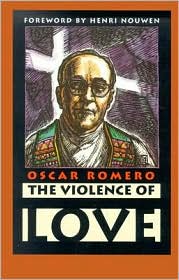