by Ally from Eden Prairie

When you hear the name of a charity you don’t really think about the story behind it. Most people either donate or say "stop calling me." You might have heard of the Susan G. Komen for the Cure foundation. You might just say cool and donate 5 dollars. Some people look deeper, and Ask questions like who was she? Why does she have an organization named after her? Is she even a real person or just some fake name? I wanted to know more about this heroic Susan G. Komen. This is what I found.

I found out that Susan G. Komen is a real person and as a kid her last name was Goodman. She had a fairly normal childhood, playing and having fun. She and her sister Nancy were very close, even when Susan went to college and married Stan Komen. Meanwhile Nancy went to college in Texas. All through this they still stayed very, very close. They stayed as close as they were when they were young.

In the mid 1970’s Susan G. Komen was 33. That was when she received devastating news. She was diagnosed with breast cancer. In that time period people normally didn’t talk openly about breast cancer or any cancer really. To treat it she received a subcutaneous mastectomy. She thought that her trouble was over, and it was for 6 months, but after those 6 months the cancer returned.

After the cancer she went to the Mayo Clinic instead. It was there that she learned that the cancer had spread to one of her armpits and one of her lungs. She continued radiation but the cancer still spread. She became a stage IV patient (the worst kind, and when you think about how horrible cancer is that’s really, really, bad) because the cancer had spread to, along with the previous places, distant organs in her body. She traveled to the Anderson Cancer Center in Houston, Texas. There she received chemotherapy. Chemotherapy is what makes your hair fall out, not cancer. It also makes you vomit and overall weakness. While she was here she told her sister Nancy that she wanted to start a fundraiser to help find a cure for others with this disease. Nancy promised that she would do everything she could to help.

Three years after she was diagnosed Susan died, her body that is. Her determination to find a cure lives on in her sister Nancy. Nancy founded the Susan G. Komen for the Cure foundation in 1982. Since then it has raised almost 2 billion dollars for breast cancer research. It has partnerships in more than 50 countries and more than 100,000 volunteers. Susan G. Komen is a hero because in my mind because even though she knew she was probably was going to die she wanted to help others before herself. Only a handful of people have those qualities: determination, persistence, and bravery. People may think that they have these qualities and boast about it. But if you actually have these qualities you don’t have to tell anybody, they just know. Susan G. Komen might have only lived from 1943-1980, but her dream lives on forever. 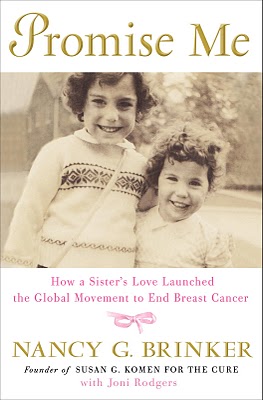