by Isabelle from Wallingford

"I am a shell flower, who could be as strong or as beautiful as me." Sarah Winnemucca, a very influential Native American woman, spoke these very words. Not many Native Americans knew how to speak English, but Sarah Winnemucca was fluent in various Native American languages, English and even Spanish. The words she spoke in these many languages still influence many people today. Life Among the Paiutes: Their Wrongs and Claims is her award-winning book. She became the first Native American woman to publish and copyright a book. Not only was this an honor, but she introduced people to the hardships of Native Americans and was one of the first influential women in a male-dominated society. A hero is a person that impacts your life and the world for the better. They change the way you think about life and the world, and they help the less fortunate. Sarah Winnemucca fits my definition of a hero.

Sarah Winnemucca was born sometime around 1844 in western Nevada. Her father, Chief Winnemucca, was the chief of the Paiute Indians. During this time period, women did not have an important role in the community. They normally just stayed home and took care of the house, but Sarah was not destined to do this. She had goals in life to help people. She decided that she would use her gifts and opportunities to help the less fortunate. Sarah was a brave, courageous woman that would not let anybody stand in her way. Even though many people doubted her, she was on a mission to teach and help her community. Nothing would prevent this woman from accomplishing her goals.

Unlike many people, Sarah was involved in both the Native American and English community. Many of the native Paiute Indians saw her as a spy with the US Army, plotting to eradicate any Native Americans. However, she actually was trying to help out the Native Americans. In 1878 when the Bannock Indians revolted against the United States, she was sent on a dangerous mission to free her captured father. Her father was the Chief of the Paiute tribe, so it was crucial that he was saved. After this occasion, people viewed her as a peacemaker. Among her many heroic acts during the war, she gave over 300 speeches to get influential people in the US government to support her tribe. She told them stories of how her people were forced out of their homes and the violence they faced. Sarah also started a school for Native Americans where they become proficient in the English language and their own native languages.

Even though many people do not know of Sarah Winnemucca, without her many things today would not be the same. Since Sarah opened a school, she gave many Native Americans a chance to learn. Without her, many influential Native Americans would not have gotten the chance to learn English. Sarah was also thought of very highly among the officers in the Bannock War. In 2005, a statue of her was erected in Nevada to honor her. It was her mission to bridge the gap between the white people and Native Americans. It was her mission to defend her people. All of these things she accomplished. She was not going to let anything stand in her way. She was known as a strong and independent woman.

Everybody has a mission in life, and you cannot let stereotypes and labels stop you from accomplishing your goal. In Sarah's day, women were just seen as being housewives and cooking for their families. Instead of fitting into this mold, Sarah set a path for her own life. This is an important lesson that kids today should know. Everybody is different and has their own mold; you should never try to fit someone else's. Some people may have little money but still aspire to go to medical school. You should work until you make it there. Some people may come from a conservative household but aspire to be a professional skateboarder. If you believe that something is your calling in life, fulfill it! 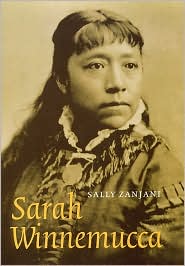