by Nat Johnson from Los Angeles, California in United States

“They fascinate me, and follow me around in my dreams.”
–Christiane Nüsslein-Volhard on her enduring relationship with Drosophila, the common fruit fly. 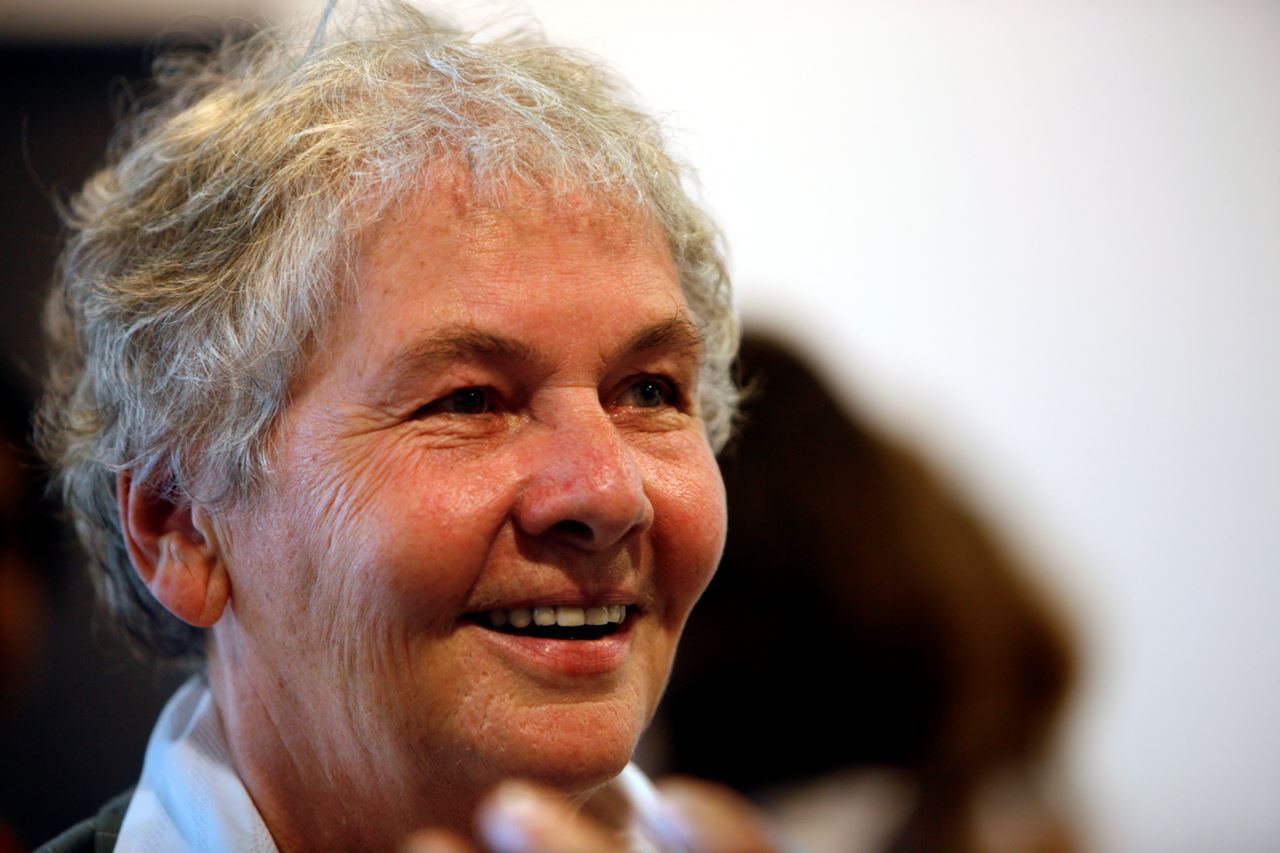 Christiane Nüsslein-VolhardRama [CC BY-SA 2.0 fr (https://creativecommons.org/licenses/by-sa/2.0/fr/deed.en)]Christiane Nüsslein-Volhard began studying the development of Drosophila embryos in 1975. She was inspired to answer a fundamental riddle of genetics: how an organism, which starts as a simple, single-celled embryo born from the union of sperm and egg, grows into an elegantly complex, living, breathing animal. Christiane's unique way of looking at the world, shaped in part by her culturally rich upbringing, led her to ask questions that deviated from what other scientists in her field were interested in at the time. Christiane attributes her ability to spot the most minute of changes-a talent that many in her field say is unparalleled-to growing up in an artistically minded family where from an early age she learned to interpret the world with her senses. Christiane used her talents to note the slight deviations in the phenotypes (observable traits) of mutant fruit flies. She then compared the anomalies in the mutants to similar traits in normal flies to determine which genes were responsible for which phenotypes. Her extraordinary discoveries, made over the course of almost twenty years of research, eventually won her the Nobel Prize and have forever changed how we understand our own nature.

At some point in your life you may have noticed how peculiar it is that you are what you are: a human being. You have two hands that are similar in size and shape; each has a palm with five fingers extending out from it, and a nail to go with each finger. Even odder, maybe, is that these qualities of yours are not a great deal different than those of your mom, dad, or any of 10 billion other human beings on planet earth. In the past century scientists have learned that the blueprint for every type of organism on earth, including human beings, lies in what we call genes, the molecular bits in every one of us that carry the information that coordinates how an embryo grows up to be a squid with eight tentacles, or grows up to be you, a human being with two hands and a remarkable capacity to learn1. Christiane began her research with the belief that we could answer how these genes control our development by performing a comprehensive study of the embryo's entire genetic construction. She predicted that scientists would then use this information to examine the origins of prenatal problems in human beings, and in time prevent certain birth defects from emerging altogether.

Those who know Christiane well describe her as a woman of both remarkable strength and pervading self-doubt. The union of these seemingly contradictory qualities is apparent in the disciplined, thorough approach she takes toward her life and research. "She is very pragmatic. She knows how she wants to get something done, and she has a very good sense of what's interesting," says Dr. Ruth Lehmann, a fellow developmental biologist who was a graduate student in Christiane's lab from 1982 to 1987 and remains a close friend. "I think that's what you need when you want to be a leader."

Christiane was born the second of five children to an architect and a painter during World War II in 1942 in Frankfurt, Germany. Despite living meagerly, Christiane remembers having a happy youth in which she was able to indulge her fascination with plants and animals: "Within my family I was the only one with lasting interests in sciences," she says. This was supported by my parents by giving me the right books, and by my brother and sisters by listening to my tales and theories." Christiane's mother, who put a premium on her children being self-sufficient, had Christiane and her siblings sew clothes they couldn't afford to buy. Christiane's parents were also amateur musicians, and they trained her to sing.

Although she was intellectually curious, Christiane was an unremarkable student, and rarely made any effort in subjects in which she wasn't interested. In an autobiographical essay requested by the Nobel committee she admits her scholarly shortcomings: ""As I was lazy and rarely did my homework, I finished high school with a rather mediocre exam. I almost did not pass in English."" Nevertheless, her avid interest in biology led her to continue her education at the university in her hometown.

University life was disappointing at first. Christiane missed the comfort of her old school and friends and found the courses in science boring and repetitive. When an innovative curriculum for biochemistry was organized in Tubengin, the only one of its kind in Germany, Christiane immediately left home to attend. She graduated in 1968 from Tubengin University with a degree in biochemistry and earned her Ph.D. there in 1973. She went on to hold research fellowships at several different institutes. In 1975 her fascination with Drosophila began2.

Christiane spent several years working under Walter Gehring, one of the world’s leading experts on Drosophila, learning everything there was to know about the creature's biology. In 1978, when Christiane joined fellow developmental biologist Eric Wieschaus as a group leader at the European Molecular Biology Laboratory in Heidelberg, Germany, she began her most critical work with Drosophila. At the time, Wieschaus was more accomplished than Christiane, and Christiane remembers, ""having the impression that I was dependent on him."" This anxiety was problematic at first, but it gradually dissolved as their relationship deepened and over time they ""thoroughly enjoyed working in the same lab.""

Wieschaus shared Christiane’s enthusiasm for working with Drosophila, and after a short period the two young researchers decided to collaborate. They would focus on the interrelationship of genes, a departure from the common interests of their contemporaries, whose efforts were geared primarily toward discerning the functions of individual genes discovered arbitrarily.

Christiane and Wieschaus looked at the function of one gene as both dependent on and responsible for the others3. Through systematic, visual observation, they began to catalogue the genes responsible for Drosophila’s development. In order to identify all of the genes involved in this process, they would first treat the fly with chemicals to alter its genes. Next, they would breed the affected fly with another, non-affected fly, and then closely observe its progeny for mutations. If they noticed anomalies in any of the progeny, perhaps a missing tail or an extra set of wings, they would be able to determine the origin of the given trait4.

Giving names such as Oskar, Gurken and Krüppel to their newly identified genes, Christiane and Wieschaus began to recognize the exciting implications that their discoveries had for human beings. One gene, which they named Hedgehog, is responsible for establishing polarity during the segmentation and limb development stages of the embryo. Hedgehog acts as a guide for molecules to help cells position themselves during development. In humans the parallel gene, or homolog, is called Sonic Hedgehog, and as in Drosophila, it plays a vital role in how our body parts develop, particularly our brains and spinal cords. Understanding Hedgehog's nature allows us to treat an array of birth defects caused by gene irregularities such as holoprosencephaly, which is a mutation responsible for severe brain defects and facial anomalies in newborns.

In 1985 Christiane became the director of the Max Planck Institute for Developmental Biology in Tubingen where she continued her research on Drosophila. Ten years later, after ceaseless dedication to the subject, Christiane and Eric Wieschaus, along with Edward B. Lewis, a pioneer for Drosophila research and a major influence on the other two biologists, were honored with the Nobel Prize. 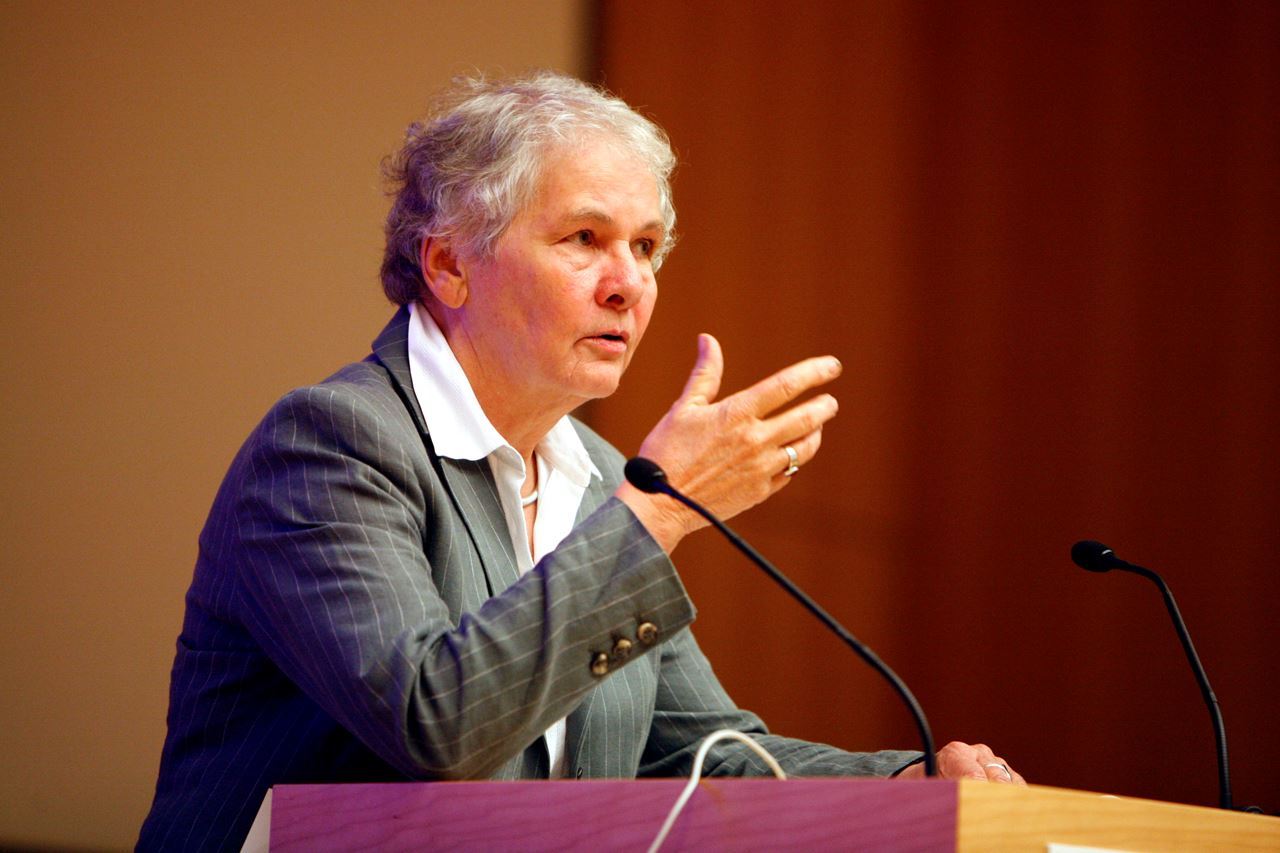 Christiane Nüsslein-VolhardRama [CC BY-SA 2.0 fr (https://creativecommons.org/licenses/by-sa/2.0/fr/deed.en)]Welcoming the responsibility that comes with her notoriety, Christiane has taken on new hurdles. She recently started a foundation in her homeland, which finances women scientists who also have children. Only the tenth woman to win the Nobel Prize in the 100-year history of the award, she is determined to convince others that this alarming disparity is reversible. The grant is designed to cover the costs of cooking, cleaning, and childcare, among other domestic chores commonly assigned to the woman of the household. Christiane feels these responsibilities frequently and unnecessarily compromise the intensity of the dedication of many gifted female scientists to their work.

Just before she was honored with the Nobel Prize, Christiane decided to shift the focus of her research away from Drosophila to outlining the developmental system of zebra fish. The zebra fish is a vertebrate organism, as opposed to Drosophila, which is an invertebrate. Zebra fish are advantageous because their young are almost completely transparent, allowing unique physiological analyses. Her pronouncement was met with mixed feelings by fellow developmental biologists, who were concerned that her change of fields would present difficulties. Several of her colleagues, however, were inspired by her decision, and have also changed concentrations. Christiane is now one among many doing studies on the development of zebra fish.

Christiane currently remains in her position as director of the Max Planck Institute for Developmental Biology. Despite her busy schedule, she makes time to satisfy her interests outside of science, some as intriguing as designing her own jigsaw puzzles. Many of her friends have remarked on her worldliness. “Janni is a wonderful singer,” chuckles Dr. Lehmann, “you should hear her recordings… really.”

1 Genes are specific sections of a longer molecule called DNA. Each gene on a DNA strand has a unique and specific task. One gene's job may be to guide the making of the fruit fly's wing, and another may be responsible for the organization of its eyes.

2 The fruit fly may not seem like the most obvious model for comparing to human beings, but almost all animals share similarities in their genetic systems. The gene families that control development of limbs in a fruit fly, for instance, are in many cases comparable to limb genes in human beings. Experimenters chose the fruit fly for a combination of its rapid and abundant reproductive ability, its manageability in large numbers, and, perhaps most importantly, its affordability.

3 By analyzing the behavior of just one player in a football game, let's say the quarterback, you might be confused. He holds the ball, runs around, and throws it. Only when you look at his actions in relationship to his teammates do you realize the logic in his behavior: his pass will be caught by another player, who will in turn begin to run with the ball; their combined efforts all in the interest of making progress in a certain direction.

4 You determine the gene's location by mapping and cloning the gene. Now it is very easy, but at that time Nüsslein-Volhard was conducting these experiments it was much more difficult. Once this is done, you use the protein product of the gene to find out where the gene is expressed.

Drosophila - -- A quick and simple introduction to Drosophila melanogaster
MPI for Developmental Biology - -- The Website for the Institue where Christiane works in Tubingen, Germany
Gene Almanac - -- an educational resource for information on DNA research
Nobelprize.org - -- Christiane Nüsslein-Volhard's autobiography
Howard Hughes Medical Institute - -- a description of the work of Ruth Lehmann

Special thanks to Dr. Andrew Bergemann, Ph.D., and my father, Dr. Edward Johnson, Ph.D., who inspired my reasearch into Nüsslein-Volhard's work and were helpful in writing this piece.

Also, thank you to Dr. Ruth Lehmann for our nice conversation and for your help understanding complicated concepts.