Wes Jackson believes in revolution. One that starts with the way we eat, and the way what we eat is grown.

From nutritional consumption stems a revolution on consumer consumption -- what we purchase, what we drive, how we live, and most important of all: how we think.

Wes Jackson wants humanity to live a SUSTAINABLE LIFESTYLE, and feels that current capitalism, empirical, and agricultural practices sabotage attempts to realize this lifestyle. Instead, he calls our current state: “the failure of success."

“By beginning to make agriculture sustainable we will have taken the first step forward for humanity to begin to measure progress by its independence from the extractive economy,” said Jackson.

Born on a farm near Topeka, Kansas in 1936, Jackson grew to understand agriculture and the family farm on a level most Americans only skim the surface of. This closeness to the land sparked an intellectual interest in him, and as a young man he obtained a BA in biology, an MA in botany, and a PhD in genetics. He returned to Kansas Wesleyan (where he received his BA degree) as a professor of biology, then eventually moved on to California State University, Sacramento where he established its Environmental Studies program and became a tenured professor.

But the land continued to call him back.

And so he left the comforts of his tenured position and moved back to Kansas where he and his wife, Dana, co-founded The Land Institute in 1976. Thirty years later, he still functions as its president, and energetic ambassador.

The Land Institute focuses on what they refer to as the problem OF agriculture, one which has plagued humanity for 10,000 years. That is, our inability thus far as humans, to maintain a sustainable system for long-term agricultural welfare. In our modern attempts, production and yield is high, yet the land takes the brunt of this “success” as the soil continues to be depleted of its natural goodness, greatly due to erosion and to chemical contamination of the land and water.

The soil can only continue down this path for so long before it eventually loses its ability to bear fruit. History has proven this. Our agricultural errors have greatly abetted much of what has been coined as “desertification” – areas that were formerly fertile literally turning into deserts over time. The UN claims that since 1990, “about six million hectares of productive land have been lost every year around the world as the land becomes degraded and less fertile,” and an estimated 135 million people, primarily in Africa (at this point), will be displaced from their land because of it.

Flawed empires have fallen. Kingdoms have made way to new systems. So too is the land eventually bound to collapse under our current flawed agricultural empire.

Thankfully, some ears have finally bent to listen.

But with biotechnologists, chemical companies, farmers, governmental departments, conservationists, environmentalists and others trying to bring their own opinions, and in some cases, their own profit lines, to the prevalent viewpoint, who should we be listening to?

“There are an awful lot of people who have an intuition that nature's wisdom is critically important. This isn't to say that there's no place for human cleverness, but it is to say where our emphasis is. To say that human cleverness is the greatest, that's hubris.”

“Is it possible that embedded in nature's economy are suggestions for a human economy in which conservation is a consequence of production?”

That's exactly where The Land Institute takes its knowledge from. Jackson and his team work to achieve an agricultural system with the “ecological stability of the prairie, and a grain yield comparable to that from annual crops.” The prairie is a system which naturally sustains itself by conserving its own water in order to survive environmental trials. The Land Institute practices a growing technique known as polyculture which mimics sustainable natural ecosystems like the prarie. This form of sustainable agriculture recycles crop residues back into the soil to increase its fertility and includes plants which naturally feed the soil vital elements, like nitrogen.

Monoculture, the system currently most in practice around the globe, particularly in the northern hemisphere, focuses on high-yield production of particular staples. Farmers will grow an entire field of wheat, for example, which while often providing an abundance of one food source, also leaves the entire field at risk for factors like disease and insects, as it eliminates the plants' natural abilities to help other plant species survive, and leaves the topsoil and field at plain risk to weather conditions when it lies bare during the non-growing season.

Likewise, the Land Institute practices hands-on research, working to see which types of vegetation work best together, creating ensembles that mimic the structure of sustainable natural ecosystems, like the prairie. They call it Natural Systems Agriculture (NSA), described as an “agricultural community modeled on the structure of the native ecosystem of the region." This system shifts the focus from annuals (like wheat fields) to perennials and species diversity. Additionally, this system also shifts the focus away from our reliance on fossil fuels and expensive technologies which leave developing economies struggling to catch up, if not fail altogether.

Jackson has penned several papers and books on the importance of, (and urgent need for), sustainable agriculture, such as Rooted in the Land: Essays on Community and Place, Becoming Native to This Place,Altars of Unhewn Stone, and Meeting the Expectations of the Land. 1980's New Roots for Agriculture, focuses on the agricultural research at The Land Institute.

He is a recipient of the Pew Conservation Scholars award in 1990, a MacArthur Fellowship in 1992, and a Right Livelihood Award in 2000, also referred to as "the alternative Nobel prize." Life Magazine named him one of 18 individuals predicted to be among the 100 "important Americans of the 20th century," and more recently in November of 2005, Smithsonian Magazine, in celebration of its 35th anniversary, selected Jackson as one of "35 Who Made a Difference."

Wes Jackson hopes the necessarily (and inevitable) shift in focus towards sustainable agriculture will eventually transcend into our overall mind-sets -- blossoming from a shift in growing techniques into a shift in governmental structures, personal and consumerist practices, and our attitude and approach towards our place in community and in nature.

For now, he is working on planting those seeds, too.

Mainstreaming Sustainable Agriculture -
Strategies for putting our biological knowledge to work; an interview with Wes Jackson
The New Farm -
addresses the issue of: Creeping desertification: the cause and consequence of poverty
Global Issues, Regional Applications
Land Use, Deforestation, and the Loss of Grasslands and Wetlands -
Changing the world: Documentation of large-scale human-induced earth-surface change in images from satellites, the Space Shuttle program, and the International Space Station 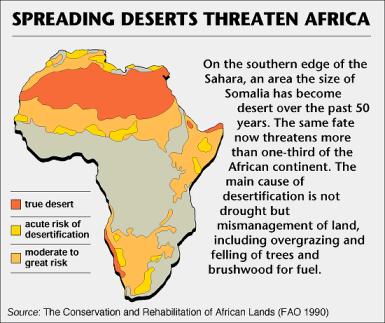 "When people, land, and community are as one, all three members prosper; when they relate not as members but as competing interests, all three are exploited. By consulting Nature as the source and measure of that membership, The Land Institute seeks to develop an agriculture that will save soil from being lost or poisoned while promoting a community life at once prosperous and enduring."