No one knows what power lies yet undeveloped in that wiry system of mine. 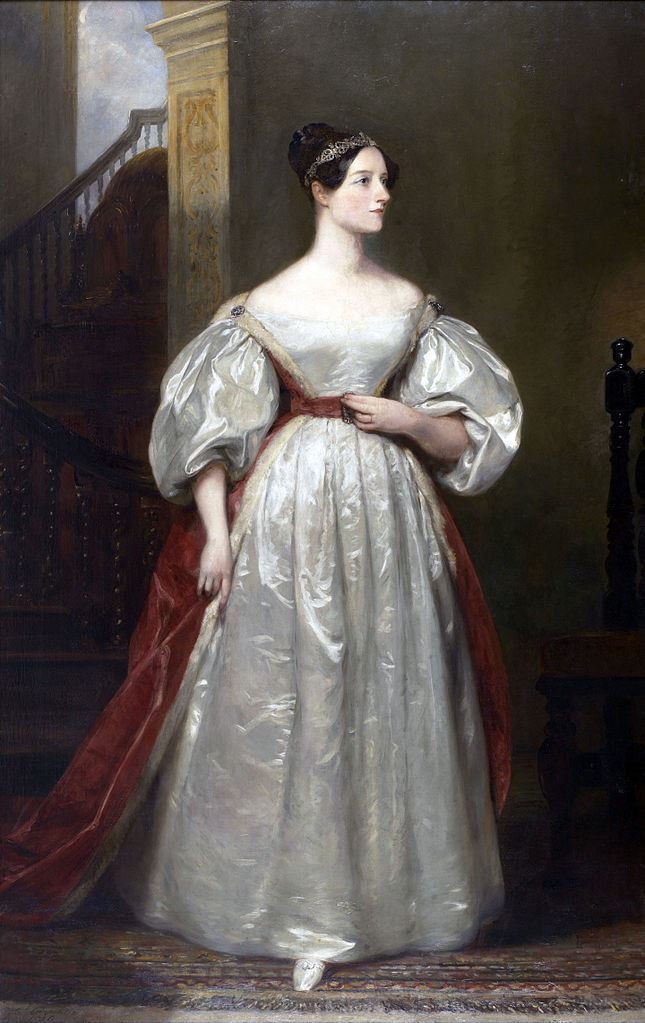 Ada LovelaceMargaret Sarah Carpenter [Public domain]Augusta Ada Byron Lovelace had a burning desire to discuss issues that were not considered appropriate topics for women. Fortunately, the well-known mathematical genius Sir Charles Babbage encouraged her to become a part of his team. Lady Lovelace took notes regularly that later shed light on Babbage's other creative works. With her mathematical knowledge, she understood some of his plans for making engines.

August Ada wrote; "We may say that the Analytical Engine weaves algebraic patterns just as the Jacquard-loom weaves flowers and leaves."

She longed to find a way of channeling her talents. Her husband supported her and provided hired help for their three children.

During her course of study she received many honors and titles that are still awarded today. In 1980 the U.S. Department of Defense honored Ada Lovelace by naming a new computer programming language 'Ada.' She is also considered the first computer programmer, even though the she did not come up with the idea.

Babbage's works would not be recognized today without her writing ability. She wrote about writing letters to Babbage in the series The Machine that Changed the World. The letters and writings were compiled to produce Ada, The Enchantress of Numbers: A Selection from the Letters of Lord Byron's Daughter and Her Description of the First Computer. Byron's articles "Observations on Mr. Babbage's Analytic Engine" and her "Notes" appeared in the prestigious journal Taylor's Scientific Memoirs, under the pseudonym of A.A.L.. These initials provided a safe way for Byron to publish her writings without inviting ridicule.

Throughout the world Byron's work is recognized in an array of industries. The Ada computer program is used bu organizations in Belgium, France, Germany, Sweden, Switzerland, Spain, United Kingdom, and the United States. Ada is also used in many privately-owned industries such as control systems, manufacturing systems, banking and information systems, aviation, satellite and communication, computer-aided design and manufacturing, and even in the entertainment field.

The control system, NIF, uses the Integrated Control System (ICCS) architecture. The design is flexible enough to allow the construction of many similar applications from a common framework. A summary that lays the essential foundation for understanding the model-based engineering approach used to execute the design is available at: National Ignition Facility Programs. Manufacturing systems like Enviroplan chose Ada in part because of its "government-friendliness" and in part because its validation had a reputation of enduring formal and rigorous testing. But mostly Ada's multitasking made it the best language for the software, as well as its flexibility, robustness, and ease of change, which proved themselves in two subsequent ports of CEMDAS to new hardware.

Other manufacturing systems such as Westinghouse's Czech Nuclear Shutdown System and Weirton Steel Distribution Process Control System are also utilizing the Ada program. The banking system in Sweden automates all payroll, expenditures, deposits, and electronic transactions. Customer information is first collected and inputted into the primary database. The second phase includes the use of actual financial transactions and user accounts. Ada enthusiasts around the world await news of the project's success and can expect to learn that the system, upon its completion, handles 2,000,000 financial transactions per day. The Local Electric Utility Company uses Ada to cut the processing time by 99.5%. Aviation uses Ada for European air traffic control, airbus 340 flight warning system, Boeing 777, Boeing 777 brake control system, and the Boeing 777 power management system. Satellite and communications systems use the language to develop remote C2 system for PABX Communications (corporate telephone systems for multiple call handling), for the global positioning satellite system, for radio telescope control, and even the mobile communications system (ABB Nera, Satcom, Inmarsat M and Inmarsat B).

In computer-aided design and manufacturing "Super-Cad" (system for the heating/ventilation/air conditioning (HVAC) industry), integrated circuits design, vehicle engine test systems, and the Microsoft Windows design-automation all use Ada. In the entertainment industry, this programming language is used to edit videotapes and prompting televisions. One-tenth of the time and cost of budget is used in rocket software which is the primary reason the military uses Ada.

Why do so many different industries use Ada? Ada is known as the most correct, safe, reliable, and easily maintainable program application on the market. Ada uses a multi-threading, with the exception of handling, in the OOPL (Object-Oriented Programming Language) on the market today. The worldwide acknowledgement of this program has increased technical support, organizational assistance, and reference manual available to users.

The Ada Information Clearinghouse (AdaIC) has been established to provide information about the technical aspects of Ada programming and the syntax involved, and maximize the language's efficiency, cost effectiveness, and productivity.

Even though August Ada Byron (Ada Lovelace) is no longer with us, her creative talents in writing with detail and exquisite simplicity have continued to grace us even today. Over 35 years after her death, Herman Hollerith (1860-1929) invented a computer that would use a punch card for sorting and tabulating information for the United States Census. In 1931, Vannevar Bush, an American scientist, educator, and administrator, born in Everett, Massachusetts, built the first "modern large analog" computer. The most recent honorable recognition that Ada received was in 1984, over a century after her death, Ada became a trademark of the United State Department of Defense.

It is a wonder how critical we may be, at times more so than others, about our talents; how unaware we are of our full potential, that August Ada Bryon held so close. If we could be aware of the cruel sentences and limitations we place upon our own strengths and weaknesses, and dismiss them as appropriately as it would be to do so, maybe we, even long after our deaths, could be remembered. Believing, like Ada, that we still have so much to discover within ourselves, we should unleash those binding chains of negative self talk. Lady Lovelace once stated, "No one knows what power lies yet undeveloped in that wiry system of mine." I too believe in myself and the potential my mind holds!

Ada Byron was born to Anna Isabella Milbanke and George Gordon Noel Bryon, the famous British poet, on December 10, 1815 in London, England. Only a few months after the birth of their first-born daughter, Lady Byron requested a separation from George and received sole custody of their daughter Ada. Less than a year later in 1816, Lord Byron, her father, moved to Switzerland, then Italy; he never returned. Ada grew up thinking that her father never cared for her at all, until later on in life when her mother decided to give her a treasure chest full of items that he had sent her.

Terrified that her daughter would grow up to be a poet like her father, Lady Bryon introduced Ada to Augustus DeMorgan, a mathematical genius of his time. During this period of study, she was known to be energetic and extremely talented. She was accomplished in both physical and mental pursuits: gymnastics, dancing, horseback riding, piano, violin, and harp. Her mother once commented that Ada was especially fascinated by the mechanical aspects of things, taking things apart to discover how and why they functioned as they did.

As Ada grew older, she was able to take advantage of activities that were only available to the upper class of London, attending concerts, theatre, and elegant parties. Here she met some of the famous people who were later influential to her successes.

In 1824, when Ada was eight years old, she received notice that her father had died in Missolonghi, Greece, where he had gone to fight for the independence of Greek from Turkey.

When she was 18 years old, Ada Lovelace met Charles Babbage at the home of her math teacher, Mrs. Somerville. Babbage was the mind behind the mathematical engine that she took an interest in. This relationship with Babbage changed her life. She was also an active member of the Bluestockings, a group of young women who would gather periodically to hold literary discussions. These young women would also attend geography lectures at the University of London.

At the age of 19 Byron married Sir William King, who would soon become the Earl of Lovelace. The two of them had three beautiful children: Bryon Noel Byron (1836), Anne Isabelle (1837), and Ralph Gordon (1839). After their marriage and birth of the first-born son Bryon, she wrote the first lengthy letter to Sir Babbage and began to attend lectures where the Difference Engine was discussed.

After hearing of the wonderful engine that could calculate Bernoulli numbers, she attended many lectures on the Difference Engine by Dionysus Lardner at the Mechanics Institute. She took painstaking notes, which she shared with her friend, Charles Babbage. Charles Babbage once wrote:

If you are as fastidious about the acts of your friendship as your are about those of your pen, I much fear I shall equally lose your friendship and your Notes. I am very reluctant to return your admirable and philosophic 'Note A.' Pray do not alter it . . . All this was impossible for you to know by intuition and the more I read your notes the more surprised I am at them and regret not having earlier explored so rich a vein of the noblest metal.

Babbage became a part of the family and visited the Lovelaces often. Letters about mechanical devices that would be able to compose musical symphonies and graphics for both personal and scientific use flew back and forth continually. The letters displayed Byron's approbation of Babbage's research, so she invited him to come to their home in January, 1841. Ada later suggested to Babbage that he write out the methods used by the Difference Engine to calculate the numbers; this is now thought of as the first computer program.

After writing out the details of Babbage's Analytical Engine, her life was plagued with illness. She would use dangerous combinations of beer, when, brandy, opium and morphine that only contributed to her health problems. During this period of experimental drug and alcohol use, she began to gamble. Even using her acute mathematical skills to devise winning methods of playing, she managed to gamble away her family fortune. Ada died at the age of 36 which, by odd coincidence, was the same age at which her famous father died.

Lady Augusta Ada Byron, or Ada Lovelace, was an influential force on current computer programming technology. Without her ability to translate theories into clear, readable notes, we may not have been able to interpret the complicated analyses of her colleague, Charles Babbage. A childhood devoted to scholarship and supportive family and friends, all played a significant role in making Lady Byron Lovelace the woman she was.
View a video about Ada Lovelace and her work, courtesy of Information Pioneers.