“When you stop living for luxuries, you understand the real meaning of life.” -Abdul Satter Edhi 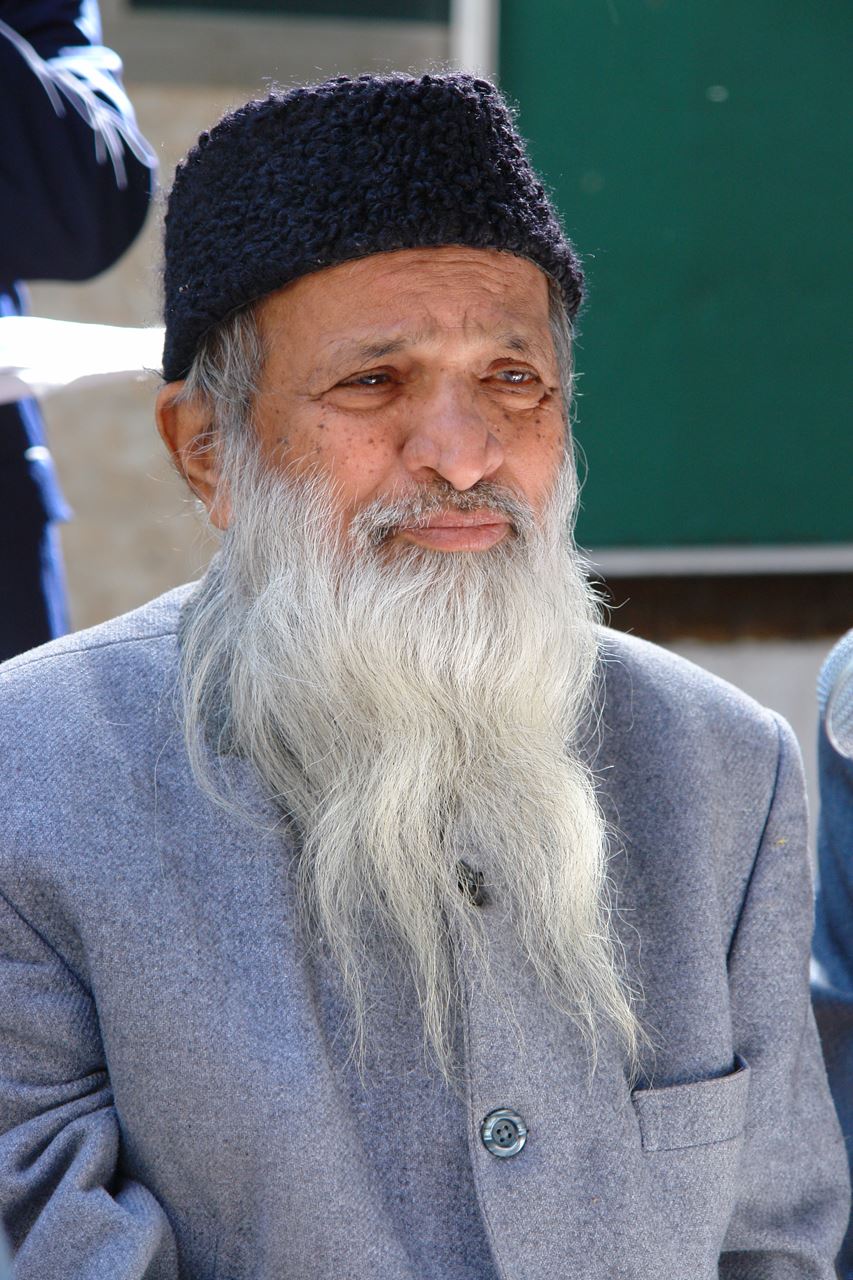 Abdul Satter EdhiHussain [CC BY-SA 3.0 (https://creativecommons.org/licenses/by-sa/3.0)]“People have become educated, but have not become human,”- Abdul S. Edhi. Heroes are humans who have traditionally used their physical strength and courage to rescue others, sacrifice themselves for a cause, or explore new territory or ideas. Today’s world still needs heroes who are physically brave, but it also needs people who are willing to sacrifice themselves for humanity. Heroes today must work to bring about a vision for a better future, and have the heart to sacrifice themselves to raise the level of life for others by serving humanity with their ideas and actions. Abdul Sattar Edhi is this sort of modern-day hero. He is a Muslim who was born in India and migrated to Pakistan after partitioning; and, once there, he crossed religious boundaries in order to establish the largest social private welfare foundation in Pakistan, earning him many humanitarian awards and the thanks of millions as his vision spread worldwide. His examples of vision and service to others, as well as his compassionate heart, have earned him the nickname “The Richest Poor Man,” inspiring many to follow his path. This is why Edhi is considered a hero for today’s world.

One of Edhi's wisest quotesMy own workEdhi began his path toward humanitarian heroism when he was very young. His mother was instrumental in opening his awareness of others, in order to get him to feel their pain and need. She began his training by giving him two paisa every day (one paisa is equal to 1/100th of 1 penny). “She then asked him to spend one on a poor and needy person and one on himself. She also had a strict check and balance on him to see whether that paisa was spent correctly or not,” (Hussain, 2017). By having a young boy actually look for others in need to help, Edhi’s mother was creating the heart of someone who could not turn away from the problems he saw around him. Finding and helping people by actively practicing the habit of giving from early childhood onward also helps Edhi to see and sympathize with the many social issues and difficulties people face in their lives. As Edhi reached his early teens, his mother became very ill, requiring him to nurse her himself, since they were very poor, and there was no one else to help him. By taking care of her for years, Edhi became aware of the problems in healthcare faced by poor people. So, after migrating to Pakistan after Partition, Edhi again faces the need to help poor people find medical care. “He joined a local community organization, but when he tried to tend to those outside of his community, other volunteers told him not to tend to those outside their community. This did not settle well with him at all. After this Sir Edhi opened a dispensary,” (“The True Story of AbdulSattarEdhi”, 2018). His dispensary was free to those in need, regardless of race, creed or color. This caused him some personal challenges, as many did not understand the importance of helping anyone in need, because they only wanted to help those in their own caste or religion. However, Edhi had a huge heart and felt compassion for all the suffering of humanity. This is why he pushed onward to enlarge his ability to help those in need by seeking a way to raise money and increase the number of services he could provide. Edhi’s heart pushed him to find a vision for a better humanity, making him a hero for today.

In order to increase his services to help humanity in all the hard to reach places in Pakistan, Edhi created a vision of people helping people. To make this possible, he needed to create a foundation to process donations which ranged in size from as small as a rupee to as large as a person wished to contribute. “Edhi established the Edhi Foundation. Moreover, he set up a welfare trust, titled as the Edhi Trust with a starting amount of  five thousand rupees … Considered as a protector of the poor people, [Edhi] started accepting various payments, which permitted him to extend his administrations,” (Parhlo, 2018). With his startup funding, Edhi was able to add a free ambulance service in addition to his free pharmacy.  “A substantial donation from a Karachi merchant in 1957 enabled him to purchase a used vehicle...he painted the words ‘Poor Man's Van.’ Driven by Edhi, this van was the first of what eventually grew into a fleet of ambulances and air ambulances capable of transporting a million patients each year,” (“Abdul Sattar Edhi" 2018). As he received more money, he expanded the ambulance service, added more pharmacies, and began looking for other areas of need to further continue and develop his vision to help the needy, poor, and helpless. His next area of service was for homeless children, and then he added medical care.  “He also began maintaining orphanages to care for abandoned babies and children. The foundation’s activities grew to include funeral services... provision of homes and soup kitchens for the destitute, and assistance in emergencies,” (Bauer, 2019). Edhi expanded his network of private services to become the largest social service network in Pakistan. He took no government support, and all services remained free to the people he served, regardless of their race, religion, or location. Taking a heart filled with compassion and joining it with a vision of how to help, Edhi became a hero through establishing the Edhi Foundation. Yet, his vision did not stop there. As the scope of Edhi’s network began to fill the needs of Pakistanis inside Pakistan, Edhi turned to the needs of disaster victims and Pakistani refugees elsewhere around the world. His continually growing network of service won the attention of people not only in his own country, but around the world; Edhi began to be recognized for his humanitarian services and was given awards, but he only wanted to live a life of service helping others.

Because his vision encompassed care for so many, his life and work received more and more attention, making it difficult to be able to live a life of service and remain true to his heart’s purpose.  “In an interview given to a journalist in Lahore, in 1991, Edhi said, ‘I want to request the people not to invite me to social gatherings and inaugural ceremonies. This only wastes my time which is wholly devoted to the well being of our people.’,” (Edhi Foundation, 2016). In order to live a life of service, Edhi remained actively involved in each of the foundation’s activities. “Neither Edhi nor Bilquis [Edhi's wife] receives any salary. They live on the income from government securities that Edhi bought many years ago to take care of their personal needs for the rest of their lives, thereby freeing them to devote single-mindedly to their missionary work,” (Edhi Foundation, 2016). Edhi never did just step back and just administer the foundation. He drove the ambulances, worked in the clinics, visited and worked with the children, dispensed medication, oversaw emergency relief efforts, and managed the money of the foundation. He lived simply and near his work, often sleeping at his office or in the clinics. No matter how much he served others through his actions, Edhi felt that the biggest service of all would be to not only continue working with the poor and helpless but also to educate and train them, so they could help themselves and so raise the level of life for all humanity. The mission statement of his foundation expanded to include a mission of “Giving opportunity to Pakistan’s underprivileged children through the right to a basic education,” (Edhi Foundation, 2018). Through education, he could help people prevent themselves from remaining in the crushing grasp of poverty. “Apart from teaching reading and writing, [the educational program] covers various vocational activities such as driving, pharmacy and para-medical training, all with an emphasis is on self-sufficiency,” (Edhi Foundation, 2018). Edhi believed education could help the people he cared about to get jobs, have money, and most importantly, live lives of dignity and health with self-sufficiency. Through education and service, so many lives could be changed for the better. After establishing the foundation and bringing about his vision of how people can help people, Edhi still remained a symbol of heroism for today by remaining a simple, caring individual, with a heart for serving others to better humanity, not only for today, but for the generations to come. 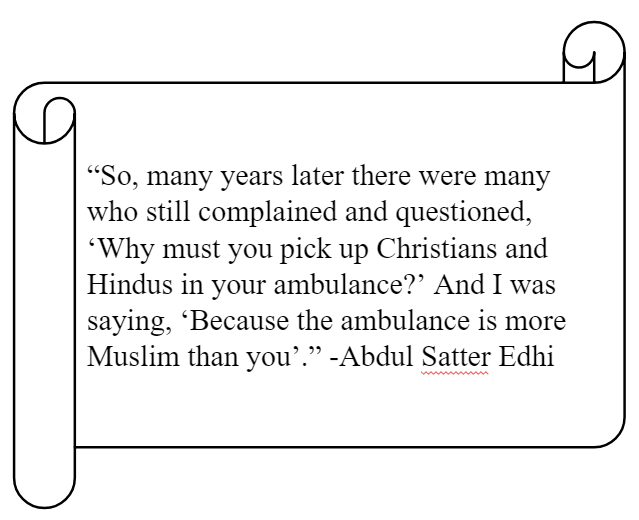 Edhi explaining why he helped non-muslimsMy own workThrough his life of service, heart, and vision, Abdul Sattar Edhi has become a hero who has changed the lives of millions of people around the world. Despite winning international awards such as: the Lenin Peace Prize (1988); Peace Prize from the former USSR, for services during the Armenian earthquake disaster (1988); Hamdan Award for volunteers in Humanitarian Medical Services (2000); International Balzan Prize (2000) for Humanity, Peace and Brotherhood, Italy; Gandhi Peace Award (2007), Delhi; Seoul Peace Prize (2008), Seoul; Muslim Peace Prize (2010); London Peace Award (2011), London; and national awards including: Human Rights Award by Pakistan Human Rights Society; Shield of Honor by Pakistan Army (E & C); Pakistan Civic Award from the Pakistan Civic Society (1992); and Recognition of meritorious services to oppressed humanity during the 1980s by Ministry of Health and Social Welfare, Government of Pakistan (1989), Edhi’s life was lived simply and without any income from his charity. His work of service continues today, even after his death, because the foundation is being managed by his children in the same way he ran it. As posted by the Edhi foundation, today the Edhi foundation has around 6,000 volunteers divided into different groups to support twelve major service areas, ranging from finding missing people and helping in worldwide disasters to the education of the children of tomorrow (Edhi Foundation, 2018). What is most inspiring to me about Abdul Sattar Edhi is how much his internal moral values and lifestyle remained so constantly in tune with his original ability to see the needs of others, coupled with action to help them. Without examples like Edhi in the world today, not only would the people he helped, and continues to help, be worse off, but humanity would not have a role model like him to help set the path toward a higher social consciousness to help humanity to keep growing ever better, regardless of race, creed, or nationality. His open-heartedness and inclusivity are truly a living example of the best of human nature. By seeing his life, I have become more aware of the need to look around me to see where I can help others. I now hope that I can find a passion and vision which will help others and leave the world in a better state. If I could be as inspiring as Edhi, I too would not mind being a person called “The Richest Poor Man”; rich in value through contribution to millions of lives - past, present, and future; poor only in the sense that no money is wasted on the outer trappings of wealth, which do not benefit society.  Edhi is truly a inspiring hero who has shown the world of today how much can be accomplished from the desire to help; the vision to connect people, so they can help each other; and a commitment to serving those in need. The world is rich because of heroes like Abdul Sattar Edhi.

Edhi Biography - A very detailed biography of Edhi's life.
Edhi Biography video - A short and quick video about Edhi and his origins

Hussain, Mushahid. “I Was Inspired by the Example Where Mother of Edhi Sb Used to Give Him Two Paisa's Every Day.” Medium, Medium, 21 Mar. 2017, medium.com/@mushahid78911/i-was-inspired-by-the-example-where-mother-of-edhi-sb-used-to-give-him-two-paisas-every-day-ebdbcaec952b.