by MY HERO Staff from Los Angeles, California in United States 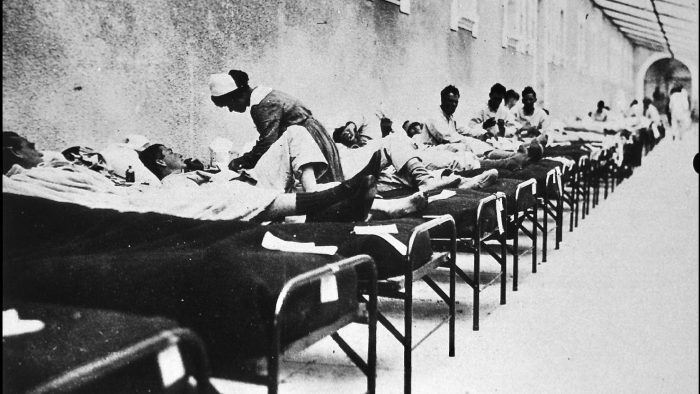 The sheets were bloody, they always were. No matter how many times they were changed, the blood kept oozing, dripping from their ears and noses. The young nurse would wipe it, but it continued to trickle over their cheeks where mahogany spots had appeared. She knew in days the spots would disappear, blending into their faces that would turn dark blue from lack of oxygen. In this pre-antibiotic era, death was imminent. All she could do was keep wiping, trying to make them comfortable, until the fluid in their lungs suffocated them. 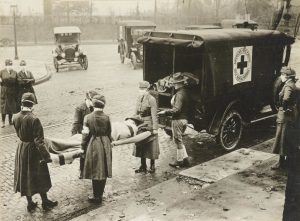 Red Cross nurses during WWIImage credit: NYT The year was 1918, and this was the Spanish Flu, the pandemic that was roaring across the globe. It horrified and terrified and confounded, but Aileen Cole Stewart refused to turn away.

Born in Piqua, Ohio, in 1893, Stewart was the descendant of former slaves, but little else is known about her childhood and early years. Her history picks up in 1914, when she entered Freedman’s Hospital Training School in Washington DC to study nursing at Howard University Medical School. Before being accepted, she underwent three months of probationary training, a kind of “test period,” where she made beds, took temperatures, served meals, and cleaned toilets.

Having passed by showing “good moral character and the stamina for drudgery,” she began three years of back-breaking and soul-crushing training [1], involving 12-hour shifts and stringent rules that dictated how nurses would live their lives—on their off time, they weren’t allowed to interact with interns, medical students, or other hospital workers. Broken rules brought about public humiliation by the director who would, as Stewart explained, take their nursing cap, forcing them to work “capless, in disgrace.”[i]

In 1917, by the time she passed her state board exams, America had joined the war raging in Europe. The Army and the American Red Cross were urgently calling for nurses. But, despite the shortage and being highly qualified, Stewart and seven other Freedman nurses were placed on the reserve list. The reason: Jim Crowism. The US Army refused to allow Black nurses to serve because they were black.

Then came October 1918. The second wave of the Spanish Flu had begun ravaging America; this one was deadlier, coming on quicker than the first–by month’s end, 195,000 Americans were dead. The Army grew desperate and anxious and lifted the ban restricting Black nurses from serving. 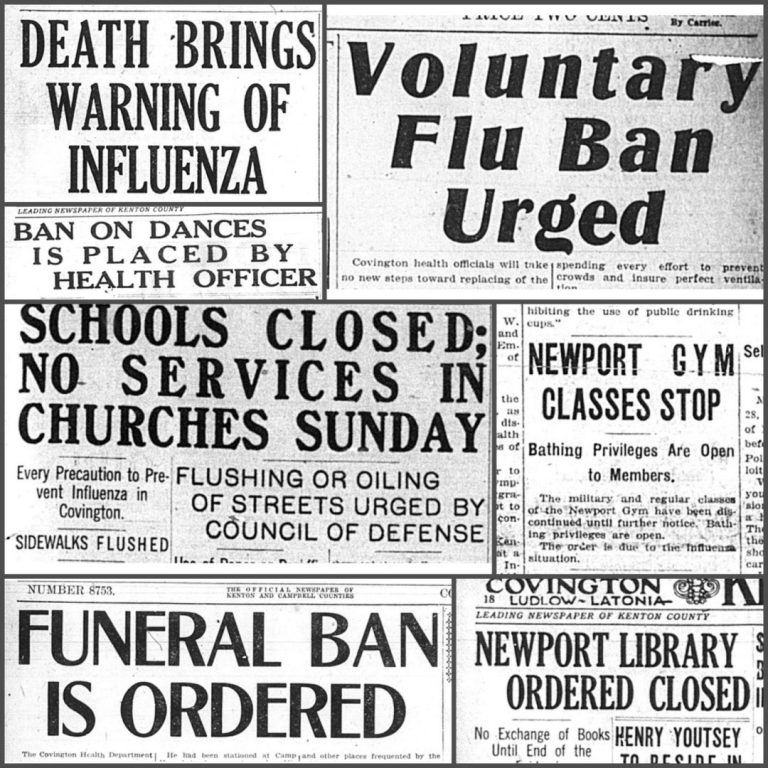 At the time the new strain emerged, Stewart was in West Virginia with the Red Cross hoping for overseas duty. But that never came. Instead, she along with two other Freedman nurses were called into the office of Major Maxwell. A discerning man, he sat under a large wall chart dotted white pins, all indicating flu-stricken areas in dire need of nurses. Sit, he gestured to the three nurses and began:

He was right. The uniforms, blue capes with a scarlet lining were beautiful, were a symbol of service and professionalism. Stewart longed to wear it. She recalled thinking how “it was hard to tell which came first, patriotism or uniform.”[iii]

Major Maxwell continued: “When you are young it’s easy to be romantic, isn’t it?”

The question was rhetorical, meaningless. Once he said it, his tone changed, and then, Stewart recalls “he got down to selling us the unromantic assignment of nursing coal miners with the flu.”[iv] 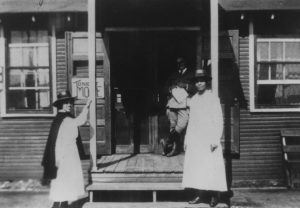 Cascade, West Virginia
But, Major Maxwell didn’t really need to “sell” anything. The orders had already been given for Stewart to be transferred to the hills of Bretz, West Virginia where she would travel around in a rattling old Ford visiting 20 flu-stricken houses a day. Before she could really settle in, new orders arrived: they needed her in Cascade, West Virginia, a coal camp and coke works situated just across the mountain.

Cascade was a barren place with a single road that “oozed mud” when it rained. It was dreary and cold, and the stacks from the coke ovens sent up plumes of black smoke that filled the sky day and night. Stewart spent her days tallying the sick; on November 11, Armistice day, she completed the small field hospital. Happy that the war had ended, she remained sad that “Negro nurses were not called to serve” on the battlefield.

Then came the letter on November 13, 1918 that would change her life:

The Surgeon General has called for a limited number of Negro nurses,

enrolled in the Red Cross to be available for service about December 1, 1918.

Your name has been selected as one who might be willing to consider an assignment, 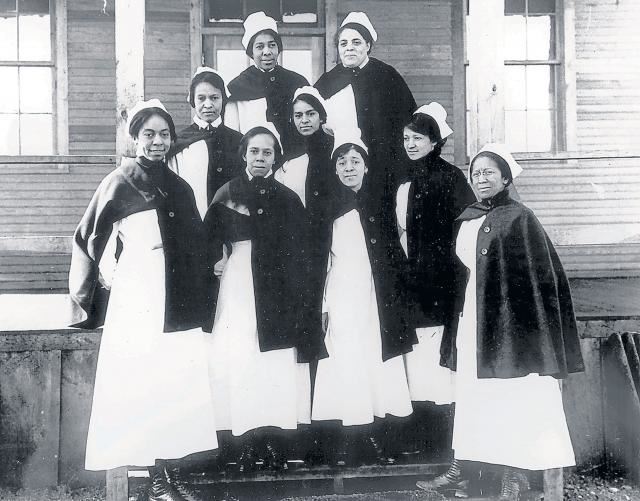 Stewart (left) with Army nurses at Camp ShermanImage credit: army.mil On December 1, 1918, Aileen Cole Stewart made history, becoming one of 18 African American nurses to serve in the Army Nurse Corp and one of nine nurses to serve at Camp Sherman, Ohio, one of the largest training cantonments to train and mobilize men for the war. The huge population of the camp and the surrounding town had become fodder for the flu.

Stewart arrived in the middle of its rampage, finding thousands of residents and soldiers infected—records indicate that approximately 5,686 people were stricken and 1,777 of them died. Living in the segregated quarters, she and her fellow nurses were only allowed to care for German POWs and African American soldiers who had returned from the battlefield, some had war wounds; others had both, the flu and injuries.

Nine months later, on August 16, 1919, Stewart’s unit was discharged. Following her service, she moved to New York, where she worked as a public health nurse for 34 years; at 68, she returned to school and received a degree in Public Health Nursing from the University of Washington. In 1963, she wrote a moving piece reflecting on her career and time in the Army. Her words, erudite and rapier, speak volumes about her humility and ethics and the deeper meaning of “doing service”:

“The Story of the Negro nurse in World War I is not spectacular. We arrived after the Armistice was signed, which alone was anticlimactic. So we had no opportunity for 'service above and beyond the call of duty'; But each one of us in the course of our professional relationship did contribute quietly and with dignity to the idea that justice demands professional equality for all qualified nurses.” 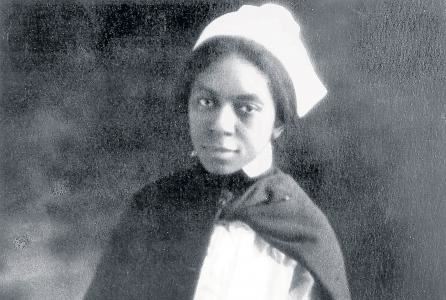 Maria Smilios' website - All about her forthcoming book "The Black Angels: The Untold Stories of the Nurses who helped Cure Tuberculosis"
World Health Organization (WHO) - 2020 is "The year of the nurse and midwife"
PBS's "Influenza 1918: Teacher's Guide" - A guide to teaching about the Spanish Flu

Maria Smilios is the author of the forthcoming book The Black Angels: The Untold Stories of the Nurses who helped Cure Tuberculosis. The book will be published in the United States by An Oprah Book, in Germany by Mohrbooks books, and in the United Kingdom by Virago Books.