"Life is too short not to laugh at all the stuff that happens."

Alicia O'Brien is 14 years old and lives in New Lenox, Illinois. I first met her via the mail three years ago when she sent me a fan letter for one of my books. The letter was typed, with a wobbly signature. Even then, Alicia was being treated for inoperable brain cancer, and the wobbly signature was because the tumor was causing tremors in her hands. But that letter was smart, irreverent, and bursting with life. It was also hilariously funny.

We were pen pals and phone pals for a while, and then finally met in person when Jeff and I spent time last year with her and her family in Milwaukee. We took her to see "Tom Sawyer" at First Stage in Milwaukee. She loved it. When we took her backstage to meet the cast, she led the way. By this time, her tumor was giving her double vision and shaky balance. But she marched into the dressing room and asked the actors for pointers.

Then there was the day she called us to tell us about something that had happened to her at school. A physical therapist gave her icky green putty, which Lish was supposed to mush to help her coordination. She looked at the putty and said, "So, basically, what we have here is booger putty, right?"

For a while, Alicia's tumor actually stopped growing. Recently, it began growing again with a vengeance. It's slowly robbing her of her ability to do so many things. She now uses a wheelchair. Tonight on the phone she told us her hospice nurse had taken her bowling. Swinging the bowling ball, Lisha fell out of the wheelchair onto her butt. She found it hilarious. She said, "Cherie, life is too short not to laugh at all the stuff that happens."

In New Lenox, Illinois, May 11 was declared Alicia O'Brien day. A limo took her to the festivities. Jeff and I were a big surprise; she had no idea we were coming.

The person who loves Alicia the most and the best is her mom, April. On May 20th, April married her boyfriend, Nick, who plans to officially adopt Alicia. He's so lucky to get to be her dad. Alicia made an illustration for my novel Zink, which is about a girl with cancer. You'll also find her photo and bio in that book. She was the source of truth and inspiration for that novel and she is the source of truth and inspiration for my life.

I have no idea who Alicia would have been if she hadn't gotten sick. But I know this: if we can't control the hand we're dealt, then it must all be about how we play the game. Alicia is an ace. She has made me a better, braver person. She has touched, and continues to touch, so many people. Sometimes I worry that she feels like she has to be Ms. Spunky all the time. And I wonder what goes on in her heart in the middle of the night.

How does my hero deal with what has happened to her? She tries to give it the most meaning that she can, for herself and for others. She writes poetry--lots of poetry. Here is one of Alicia's poems that a classmate read at Alicia O'Brien Day at her school.

Leave It To Him

I once heard a voice say
Miracles happen every day.
God lifts you up
When life has you down
Look toward his light
For courage is found.

No matter what happens
It's in His hands.
Just leave it to Him
'Cuz God understands

Alicia may know more about leaving it to God than I do. I still find it terribly, terribly hard to understand how a terrific girl like her could have to fight something so awful as a spreading brain tumor. But watching her fight, and learning from how she does it, has made me a better person. I believe it has made everyone around her better people. And that is what being a hero is all about. 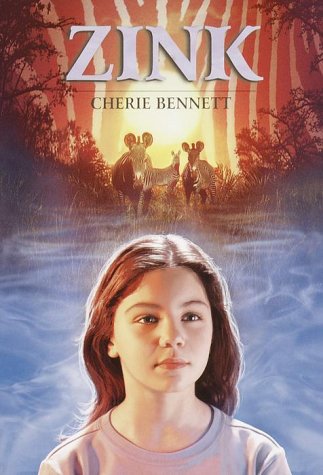 I'm a novelist for teens (Life in the Fat Lane, Zink), a playwright (Anne Frank & Me), and a syndicated columnist. I get to meet a lot of people through my work, and it is through my work that I met my own personal hero. This past week, my husband Jeff Gottesfeld and I went to visit her at her hometown near Chicago. I'd like to tell you about her.

Alicia O'Brien tragically lost her battle to lifelong illness on 29th October 2007. She will be missed. - ed.