Around the globe, going green at the ballot box

Climate change is all about adaptation – and more political parties are making adjustments in their platforms as voters push the environment to center stage.

NOVEMBER 25, 2019 - LONDON - We’ve heard the term “political arms race” before. Yet now we’re seeing a political trunks race, as in tree trunks – a sign that, in elections across the globe, climate change and environmental issues are becoming a major battleground. 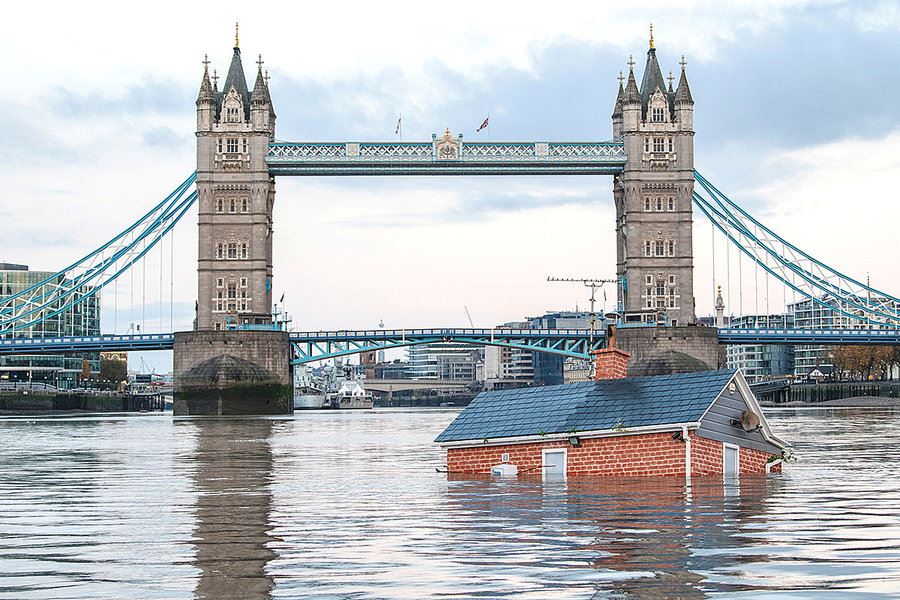 A mock-up of a British suburban home “sinks” into London’s River Thames. The Nov. 10, 2019 action was part of a protest by Extinction Rebellion to demand faster government action on climate change.Extinction Rebellion/Guy Reece/Reuters

The “trunks race” has broken out in Britain, ahead of a snap December election that Conservative Prime Minister Boris Johnson had assumed – and certainly hoped – would be all about Brexit, the question of pulling the U.K. out of its decades-long membership in the European Union.

But while Mr. Johnson has been trying to keep the focus on Brexit, other issues have been vying for the headlines. And few of them more dramatically than the environment. The first sign that his own government was alert to voter concerns in that area came in its announcement earlier this month of a moratorium on shale-gas extraction – fracking – in the wake of a significant earth tremor at one site in the north of England.

Then, as the election campaigning was getting underway, the trunks race began, with rival parties promising to plant tens of millions of new trees each year as part of efforts to fulfill Britain’s commitment to reach “net-zero” in carbon emissions by the year 2050.

The Conservatives said they’d be planting 30 million new trees annually by 2025. The Liberal Democrats countered that they would plant 60 million. The Labour Party has said it, too, would be unveiling an “ambitious” tree-planting pledge at some stage. Its formal campaign manifesto, released this week, meanwhile promised £250 billion – about $320 billion – in new investment to fund “green apprenticeships” and help people purchase electric cars.

In part, all of this reflects a growing international focus on climate change, sparked by teenage Swedish activist Greta Thunberg and the “climate strikes” she has inspired among students around the world. In the past year, the organization Extinction Rebellion has also launched a campaign of civil disobedience that brought parts of London to a standstill, along with similar demonstrations in a number of other cities in Europe, Australia, New Zealand, and the U.S.

But the main reason climate change is becoming a more prominent electoral issue is because political parties seem to recognize that, to a far greater extent than before, votes are at stake. Popular trust in mainstream parties and their leaders has been eroding. Populist movements, often focused around a series of emotionally charged issues, have surged.

And while the main issues of contention in recent years, especially in Europe, have been immigration, migration, and asylum, now the spotlight is falling increasingly on climate change.

For far-right populists, the growth of environmental protests is something to be opposed. They argue it’s just another sign of “privileged elites” ignoring the economic costs of the actions that they’re pressing for, and lacking interest in the genuine, bread-and-butter needs of the less privileged.

Yet a number of surveys, in Britain and other countries, suggests an increase in voters, especially young voters, who see climate-change action as an important factor in how they’ll cast their ballots. In a recent U.K. poll, 54% said climate change would affect how they vote in next month’s election. Among people under the age of 25, that figure was 74%.

Indeed, this week will see Britain’s first-ever televised election debate solely on climate change. Prime Minister Johnson, alone among the party leaders, is expected to stay away – but mostly, it seems likely, for reasons of campaign strategy. He has been steadfastly resisting the idea of including anyone but the Labour Party leader, Jeremy Corbyn, in face-to-face debates. He’s hoping voters will view the election as a binary choice, and that they’ll make it primarily on the basis of his vow to “get Brexit done.”

The climate-politics picture elsewhere in Europe varies. Green parties made major gains in this year’s elections for the European Parliament. During campaigning for last month’s parliamentary elections in Switzerland, where voters have quite literally been watching their Alpine glaciers melt, climate change was the overriding issue. A pair of green parties made significant gains.

In Germany, too, a majority now tells the pollsters that climate change is a top political priority. Students have been staging climate-protest walkouts. The Greens have risen dramatically in the polls. They’re now in second place behind only the Christian Democrats of Chancellor Angela Merkel, and her government has proposed new tax-and-subsidy measures aimed at curbing emissions.

Yet in both Germany and the Netherlands, right-wing parties have also been making advances – by denouncing climate-change activists as elitist scare-mongers whose proposals would damage their countries’ economies.

And in Australia, fierce wildfires have focused attention, and pressure, on the government’s rollback of environmental measures and its backing for additional coal mining. Yet the deputy prime minister, Michael McCormack, responded earlier this month by dismissing the climate-policy critics as a bunch of “woke greenies.”

The most important electoral test of growing climate-change concerns is likely to come a year from now, in the United States. With U.S. politics currently dominated by the impeachment proceedings against President Donald Trump, and by the crowded race to choose his Democratic Party challenger, it’s too early to say how prominently environmental questions may feature in the campaign for next November’s election.

But it seems likely the Democrats, whoever emerges as their candidate, will see climate change as an import rallying point in key parts of the electorate: above all, young voters, but also others opposed to Mr. Trump’s withdrawal from the Paris climate agreement and his retreat from previous American administrations’ environmental protection policies. To judge by the president’s approach in the past several years, it seems likely his campaign will adopt the “woke greenie” response, emphasize the economic costs of action against climate change, and seek to focus the campaign on other issues such as immigration.