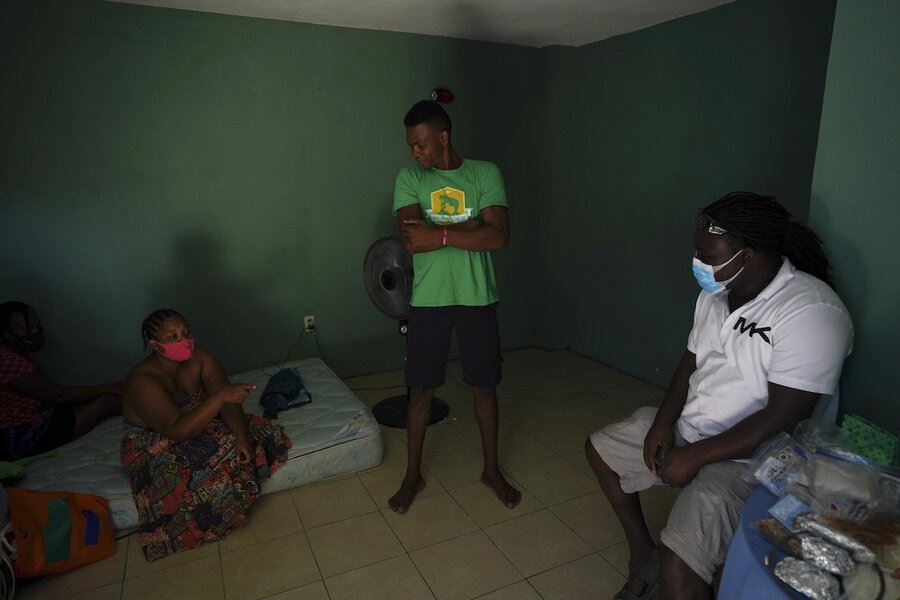 Some of the thousands of Haitian migrants who briefly formed a camp in the Texas border town of Del Rio have found a helping hand across the river in Mexico’s Ciudad Acuña.

While U.S. officials announced the camp on the U.S. side had been cleared, an undetermined number of migrants remained in Ciudad Acuña, afraid to step foot in the streets after Mexican immigration agents raided a small hotel and ringed a similar camp on the Mexican side with agents.

Some Ciudad Acuña residents took in Haitian families, while others provided food and water. Virginia Salazar, a Mexican woman, and her husband Mensah Montant, from the African nation of Togo, were among those who responded to the Haitians’ needs.

The couple brought rice to one home, medicine to another, and they’re looking for a mattress for one Haitian family. Mr. Montant knows how it feels to be a stranger in a strange land: He arrived in Mexico as an immigrant himself nine years ago, and now works as a tailor.

“I come from a family of migrants,” said Ms. Salazar, who works as a cleaner. “There’s my husband, and I have one sister who has documents and another who is illegal,” she said of relatives in the United States. “This comes naturally to me.”

They have helped about a dozen Haitians personally, but don’t know how many may still be in hiding here after U.S. authorities cleared the camp on the other side.

U.S. officials closed the crossing on Sept. 17 after an encampment of mostly Haitian migrants formed around the border bridge span. The camp was completely cleared of migrants on Friday.

Many of those migrants face expulsion because they are not covered by protections recently extended by the Biden administration to the more than 100,000 Haitian migrants already in the U.S.

About 2,000 Haitians had been rapidly expelled on 17 flights over the last week and more could be expelled in coming days.

The possibility of being returned to Haiti led many to seek shelter on the Mexican side, even as thousands more are believed to be travelling up from South America in a bid to reach the U.S. border. But Mexico has begun busing some Haitians back to the southernmost part of its own territory and preparing to send others back to Haiti.

Helping them is not without risk for Ciudad Acuña residents, who last week saw thousands of Haitians walk across the river to Del Rio, and later return to the Mexican side to buy food and other necessities.

Mr. Montant had been about to bring ice to Etlove Doriscar when Mexican immigration agents surrounded him at his home. “What’s happening, wait! I have my papers,” he said, showing them his Mexican residency.

Mr. Montant and Ms. Salazar met Mr. Dorsicar when they were handing out food earlier in the week at a smaller encampment that sprang up on the Mexican side.

When agents showed up to surround that camp, Mr. Dorsicar, his wife, and their 3-year-old daughter hid in the riverside brush until they could reach the couple’s home.

Mr. Montant and Ms. Salazar found them a house where they could rent a room, a table, and a fan for $50 per month. It means the world to the family and a Haitian woman who shares the other room.

“For the first time in days, I didn’t have to sleep with one eye open,” said Mr. Dorsicar.

Andrea García, a hairstylist, has put up six Haitian families in various homes her family owns in Ciudad Acuña.

“They arrived at my house alone, with their babies and asked to help; they said there was no place they could go,” recalled Ms. García.

“Yes, I am worried, afraid because Mexican immigration agents are going into people’s houses and are not giving them a chance at the process” to gain residency, Ms. García said. “But it is more sad than scary to see how they pray when they see an immigration van.”

To remain longer, the Haitians need to apply for refugee or asylum status, and that is done in the southern Mexico city of Tapachula. Because that process is so backed up, many Haitians feel Tapachula has become a trap for them and have tried to walk north, only to be stopped by checkpoints and National Guard troops.

The Mexican government has tried to convince private bus companies not to carry Haitians north, and even taxi drivers in Ciudad Acuña are feeling pressure not to transport them.

Taxi driver Eliseo Ortiz no longer picks up Haitians, after he was fined about $900 three months ago. “They accused me of being an immigrant trafficker,” Mr. Ortiz said, noting other drivers paid bribes to police to continue carrying them.

Manuel Casillas, the owner of a Beatles-themed restaurant near the border bridge, has seen the Haitians come and go.“This all makes me feel bad, not to be able to help them or give them work,” Mr. Castillas said. Though things have quieted down for now, he said, “I think there will be another wave.”