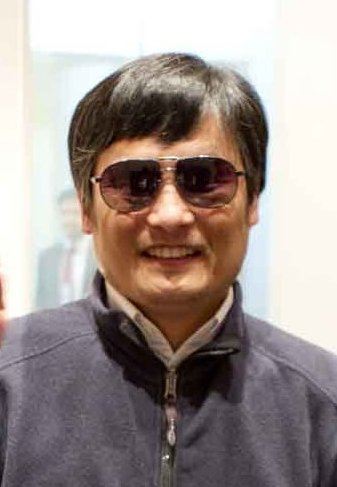 Chen Guangchenghttps://commons.wikimedia.org/wiki/File:Chen_Guangcheng_at_US_Embassy_May_1,_2012.jpg     When we first think of the word “hero,” we picture someone in a cape fighting villains and saving cities. However, there are also everyday heroes. They are whom we see to be ordinary people. The only difference is, they have taken an initiative to make a positive impact on their community. A hero is often viewed as a selfless, determined, and sympathetic individual striving for change. A hero’s story serves as a guiding light in times of hardship, showing us what is right when we may feel lost. A hero’s story stands as an inspiration to us, for their accomplishments, despite their struggles, give us hope and warmth, and fill us with awe. We look up to their values and, in a way, we aspire to become like them. The principle of taking initiative towards moral justice is something Chen Guangcheng has dedicatedly followed throughout his career. Known as “The Barefoot Lawyer,” Guangcheng is a Chinese lawyer and a civil rights activist. On the 12th of November, 1971, Guangcheng was born in Dongshigu, China, a small rural village subject to the laws of the Communist regime. He was blinded when he was just months old. Due to his family’s poor state and the lack of professional doctors nearby, nothing could be done to save his sight. Because he was unable to attend school at the time, Guangcheng learned basic skills through the teachings of his father and his four brothers. Finally, at the age of 18, Guangcheng attended the Linyi School for the Blind in Linyi, China. While at Linyi, he noticed the government’s ignorance towards the disabled, which led him to pursue an education in the law. After receiving secondary education, Guangcheng went on to become a lawyer and fought for the rights of the disabled. He then spent his time fighting against the government for the abuses that pregnant women faced under the one-child policy. His involvement angered the Chinese government, and he was later arrested and put under illegal house arrest. After months of planning and with help from family and friends, Guangcheng escaped to the U.S. embassy, from where he escaped to the United States. Guangcheng still lives in the United States today, advocating the issue of civil rights for the Chinese people. Throughout his life, Guangcheng has tackled his many obstacles with passion; he selflessly persisted to fight for civil rights, standing as a symbol of hope and sympathy for many and inspiring us to conquer our own challenges with undivided pursuit.

Guangcheng has, like any hero, has never let his goals out of his sight and advances upon them whenever possible. His victories against common injustices, including ones he faced himself, inspires us to overcome our own challenges. While studying at Linyi, Guangcheng was illegally forced to pay for a bus ride despite his disability. At the time, the law stated that disabled persons are exempt of public transportation fares. In response, he went to local law offices, appealing this case to each one, only to be rejected over and over. He kept visiting higher level offices, only to be told off even more. Finally, in 2003, he filed a successful lawsuit against the “Beijing Metro Corporation, demanding that they allowed blind people to ride public transportation for free as mandated by Chinese law” (Guangcheng 9:04). During his time at Linyi, Guangcheng was exposed to everyday injustices against the disabled, prompting him to take action. Although he constantly faced dead-ends with the offices, he never let his sights go off of his goal. Not only that, but he also came out successful in the end: ensuring that this law was applied for all whom it affected. Guangcheng’s “try and try till success” situation highlights his outgoing nature. His willingness to take matters into his own hands and work towards that change, along with the hardships he faced along the way, establishes a sympathetic connection with Guangcheng. We too feel a fire ignite within us, urging us to rise up to our own challenges and overcome them no matter what it takes. Later on in his career, Guangcheng was imprisoned for four years as a result of a case he filed. This case accused the government of abuse against women. He was then put under illegal house arrest, with guards stationed around his village to prevent his escape. However, he was still able to escape, with the help of friends, to the Chinese embassy in Beijing (Gladstone). Despite the constant security and his blindness, which drastically lowered his chances, Guangcheng was still able to escape. The triumph over his already low odds emphasizes the importance of his escape. His devotion to fight an oppressive government and work towards social and civil change fueled his willpower. The blindness, poverty, and oppression he faced inspire us to also master our hardships. Guangcheng emerged victorious over his obstacles; thus, his story teaches us that we can achieve our goals if we have the dedication and passion to strive for them. 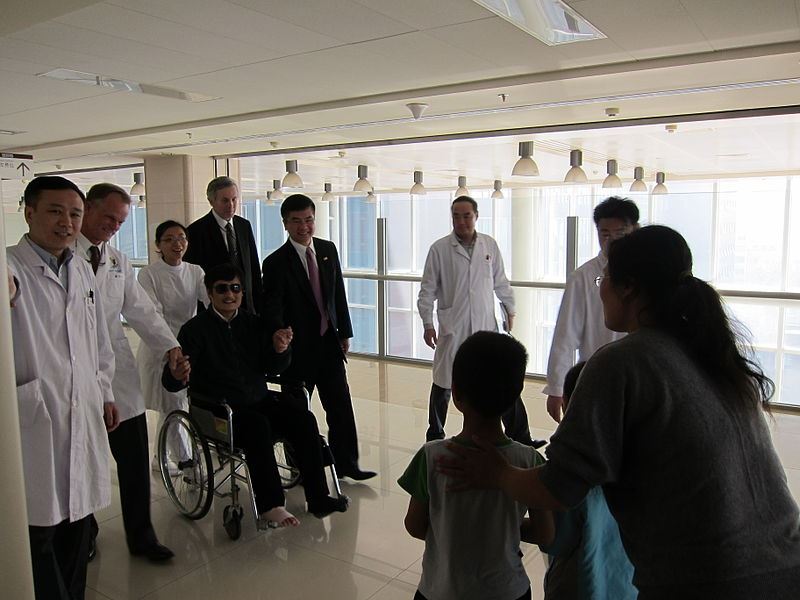 Chen Guangcheng with his wife and children at a hospital in Beijing after escaping house arresthttps://commons.wikimedia.org/wiki/File:Chen_Guangcheng_With_His_Wife_and_Children_(2).jpg     Guangcheng, like all heroes, has faced many obstacles throughout his life, and he has gotten through them with his passion for justice and his determination, inspiring us to do the same. For example, due to his blindness, Guangcheng was constantly perceived as being unable to do even the simplest of tasks, including not being able to receive any kind of education. However, Guangcheng continued to learn about the world in any possible way: “No one made mention of education for me. It was assumed I would not go.” He continued learning not only through his family, but also through his experiences in nature (Guangcheng 27). He had to deal with blindness not just as a disability, but also as a paradigm that would affect how others viewed him and his capabilities. Even then, Guangcheng pushed past others’ expectations of him, staying focused on seizing educational opportunities whenever possible and learning through his environment. He chose to step out of his comfort zone and pursue his will instead of succumbing to the expectations of others and doing as presumed. Guangcheng’s handling with his blindness encourages us to break free of our expectations in order to achieve our full potential. Later on, in his professional career, Guangcheng accused officials of subjecting certain pregnant women to beatings and forced abortions. As Guangcheng continued with this case, “the authorities began an aggressive campaign” in order to prevent him from taking it to court (Guangcheng 173). However, Guangcheng did not let this stop him: “Despite all the harassment, I still had work to do” (Guangcheng 177). To most people, the threats of a government, let alone one with military control, would be enough to repress them. Instead of backing out when faced with this situation, Guangcheng chose to continue his work in law. The power and threats of the government to him and his family was not enough to stop his mission to fight for the rights of others. Guangcheng exhibits extreme courage, for he put himself at complete risk to stand up for his moral values. This courage is amplified due to the fact that Guangcheng has so many hardships he must deal with. Through his courageousness, we learn that we shouldn’t let anything stop us, no matter its size. As if these threats were not enough, the government took further action in a second attempt to put an end to Guangcheng’s work. Therefore, Guangcheng was sent to jail and later into house arrest. However, he escaped from house arrest and fled to the United States, where he continues working with New York University to educate the world on the issues of civil rights (“China’s Blind Activist Chen Guangcheng”). The government took physical action against Guangcheng and isolated him from the outside world. Yet even after he escaped to a safe country, Guangcheng continued to advocate for the Chinese people. Even after he had escaped danger, he continued doing what placed him in such danger in the first place. Instead of lowering his morale, the government increased his will to spread word about the civil issues that plagued the Communist nation. Guangcheng broke the chains of blindness and oppression and continued to fight for civil rights with passion and fiery determination; thus, his take on challenges inspires us to persevere towards our hopes and dreams. 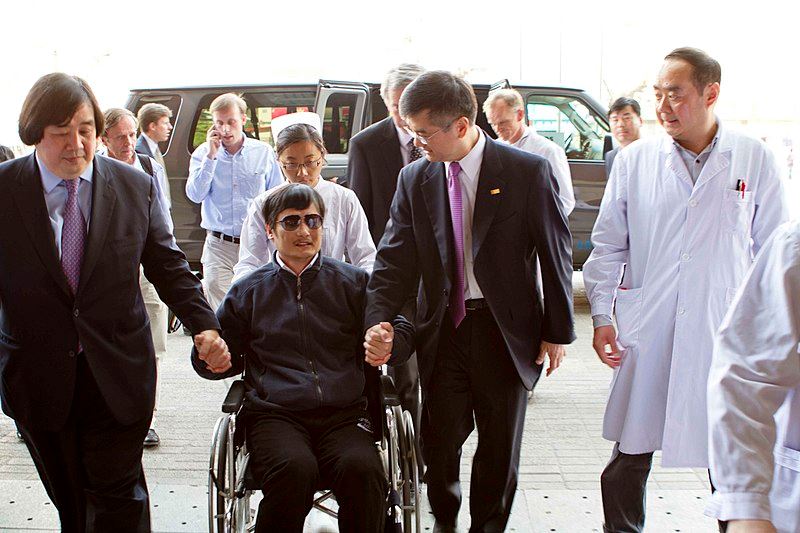 Chen Guangcheng (in wheelchair) with U.S. Ambassador to China, Gary Locke, at the U.S. Embassy in Beijinghttps://commons.wikimedia.org/wiki/File:Gary_Locke_with_Chen_Guangcheng_at_US_Embassy_May_1,_2012.jpg     Guangcheng advocated for civil rights out of his pure will, and his altruistic nature further added to his dedication to law: inspiring us to continue with sympathy and selflessness. For starters, Guangcheng was a barefoot lawyer, which meant that he received informal and unofficial education in law. Barefoot lawyers did “everything a licensed lawyer would be expected to do,” but they were paid nowhere near as much (Guangcheng 121). Although already a victim of poverty, Guangcheng was not necessarily doing his work to make a financial living. Rather, he was pursuing his goal and purpose: to work towards justness and civil rights. His strength of will goes to teach that we must not lose sight of our objectives, for they are a part of our identity and purpose. Guangcheng’s altruistic personality is also expressed by his will to stand up for the less fortunate: “His charisma lay in the fact that he stood by the ones at the bottom of Chinese society, the helpless ones” (“Chen Guangcheng: Journey to Freedom”). Guangcheng exemplifies both courage and heroism, for most lawyers would only take cases they have a high chance of winning. Guangcheng, on the other hand, was instead focused on his following his own values and overarching goal: civil justice. Guangcheng stood by his vision and “the helpless ones,” thus emphasizing his sympathy in providing a fighting chance for them. Guangcheng acted as a source of hope for the disabled and those who were neglected by others. His selflessness adds to the devotion he had towards his work because it shows that he was truly just working for civil rights rather his own success; therefore, his story teaches us to not let other factors affect the path towards your goal and to instead work around or with them.

Chen Guangcheng’s altruism, courage, passion and determination to help others and fight for civil rights identifies him as a true everyday hero. He has been inundated with problems his entire life: ranging from his own blindness to oppression from his country’s government. Nevertheless, he challenged himself and dealt with those hardships, still becoming a successful lawyer and providing hope for the hopeless. Guangcheng’s personal challenges have emphasized both his sympathy and his human connection. We feel pity for his situation, yet his accomplishments remind us that there is light in the dark. When I think of the story of the blind yet emotionally powerful man and consider his victory through many hardships, I feel inspired to follow my own dreams and surpass any challenge that I may be confronted with. The key things that may stop us from achieving our goals are doubt and lack of initiative. We must break the chain of doubt that holds back our true potential and take constant initiative in order to aspire and accomplish.

Chen, Guangcheng. The Barefoot Lawyer: a Blind Man's Fight for Justice and Freedom in China.Henry Holt and Company, 2015.