Rainforests are the most biologically diverse places on this planet: they cover only two percent of the Earth's surface, or six percent of its land mass, yet they house over half the plant and animal species on Earth. The National Academy of Science estimates that rainforests are being destroyed at the rate of 50 million acres (the size of England, Scotland and Wales combined) per year. Consequently, saving these precious areas has become an urgent environmental cause. People from all walks of life have selflessly given their time and money to help fund projects that teach people how to use the resources the rainforests have to offer without destroying them in the process.

One person, however, made the supreme sacrifice for this worthy cause. His name was Chico Mendes, and on December 22, 1988, he was killed while trying to save his beloved Amazon from destruction. 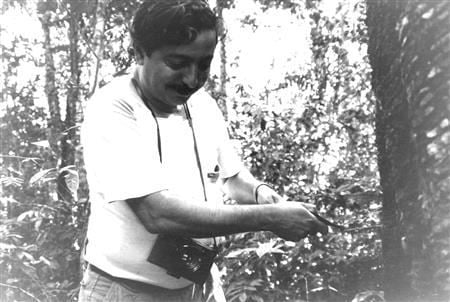 Born in Brazil on December 15, 1944, Chico Mendes grew up in a family of rubber tappers (also known as seringueiros). Rubber tapping has been practiced by families in the Amazon for generations. It is a process whereby one harmlessly extracts sap from rubber trees, which is then used in such products as car tires, pencil erasers, and even Tupperware. Rubber tapping is one of the many ways in which the resources of the Amazon are exploited without permanently harming the ecosystem. It is a sustainable agricultural system, and Chico Mendes followed in his father's footsteps in becoming a seringueiro.

Not surprisingly, Mendes encountered a great deal of opposition from industrialists and corrupt government officials who were profiting from the tearing down of the Amazon. He was jailed, fined and threatened, but nothing could deter him from his mission to save his beloved jungle. When, in 1988, a rancher named Alves de Silva ordered Mendes killed, the power of his grassroots movement only increased. For the cattle ranchers and mining interests in Brazil, "sustainable agriculture" impedes profit-making. Much money can be made by tearing down the forest as fast as possible and replacing it with pasture land and strip mines. What the ranchers and miners leave behind is a shattered wasteland, a ruined desert where once stood a forest more than 180 million years old.

Mendes fought courageously to oppose the destructive practices of such large companies and individuals. He advocated a return to sustainable agricultural systems and urged his fellow Brazilians to nonviolent protest against corporations that would rob them of their livelihoods.

The outcry following Chico Mendes' murder was deafening. It marked a turning point in the fight to save the Amazon. A human face could be connected to the cause: money and support from all over the world poured in to help complete Mendes' work. The plight of the Seringueiro has become an international cause célèbre, and many far reaching reforms have been enacted since his death to insure the future of this eco-friendly industry.

Chico Mendes is not just a hero of the Amazon, he is a hero of the entire planet. The burning of the Amazon is a burning that impacts every forest and city and village on Earth. The fires that Chico Mendes fought to put out threatened more than just a few strange and exotic locations thousands of miles away.

On a planet where the giant chain of life stretches from continent to continent, the flames of their endless burning continue to lick at the very edges of our own homes and backyards.

For more information:
The World is Burning: Murder in the Rain Forest
by Alex Shoumatoff

The Rainforest Alliance - is a wonderful resource with links for kids and teachers too.
The Burning Season - HBO film about Chico Mendes
NPR: Remembering Chico Mendes 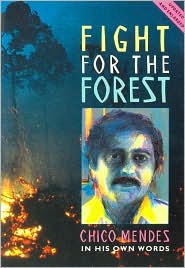 Fight for the Forest: Chico Mendes in His Own Words
Chico Mendes, Contribution by Tony Gross 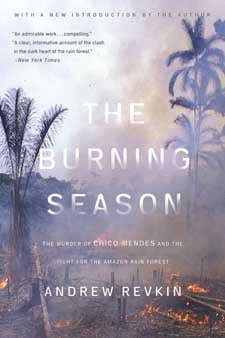 The Burning Season: The Murder of Chico Mendes and the Fight for the Amazon Rain Forest
Andrew Revkin
Related pages

International Day for Biological Diversity | May 22