Though children are too young to vote, they're finding ways to take action in other ways: In Australia, thousands of students skipped class Nov. 30 to protest the government's climate policies, and in the US and Canada, groups of young people are suing their governments.

Skipping school, marching on the streets, and suing governments, children who are too young to vote are demanding more action on climate change, as world leaders gather at a major UN summit in Poland this week.

"We will be the main victims of climate change. It will be our generation who suffer the consequences," said Sydney student Aisheeya Huq, 16, who skipped school on Nov. 30 to protest, along with tens of thousands of children across Australia.

The nationwide strikes were inspired by 15-year-old Stockholm student Greta Thunberg, who misses school every Friday to demonstrate outside Sweden's parliament. She plans to do so until the country reaches its ambitious goals to curb carbon emissions.

"It's amazing that kids are protesting and they are making their voices heard. This is our last chance, we can't mess this up," Ms. Thunberg told the Thomson Reuters Foundation.

Youth-led climate organizations and actions are springing up around the globe. Their desire for change stems from personal experience of and worry about climate change, as well as a desire to hold their governments to account, their members say.

Half the world's population is now under 30 years old, and are increasingly vocal on political and social issues, with climate change the biggest concern for youths from 180 countries, according to a 2017 World Economic Forum survey.

The 2015 Paris Climate Agreement pledged countries to shift the world economy away from fossil fuels and limit the rise in global temperatures to avert more extreme weather, rising sea levels, and the loss of plant and animal species.

The United States has since said it will withdraw from the deal.

Global leaders will meet in Poland from Dec. 2 to Dec. 14 to produce a "rule book" on how to reach these targets and implement the 2015 Paris deal agreed by nearly 200 nations.

Australia, one of the largest carbon emitters per capita, has vowed to lower emissions by 26 percent from 2005 levels by 2030, a figure that new prime minister Scott Morrison said his administration would not revise.

Rebuking the school walkouts, Mr. Morrison said in parliament on Dec. 3 that there should be "more learning in schools and less activism" on climate change. 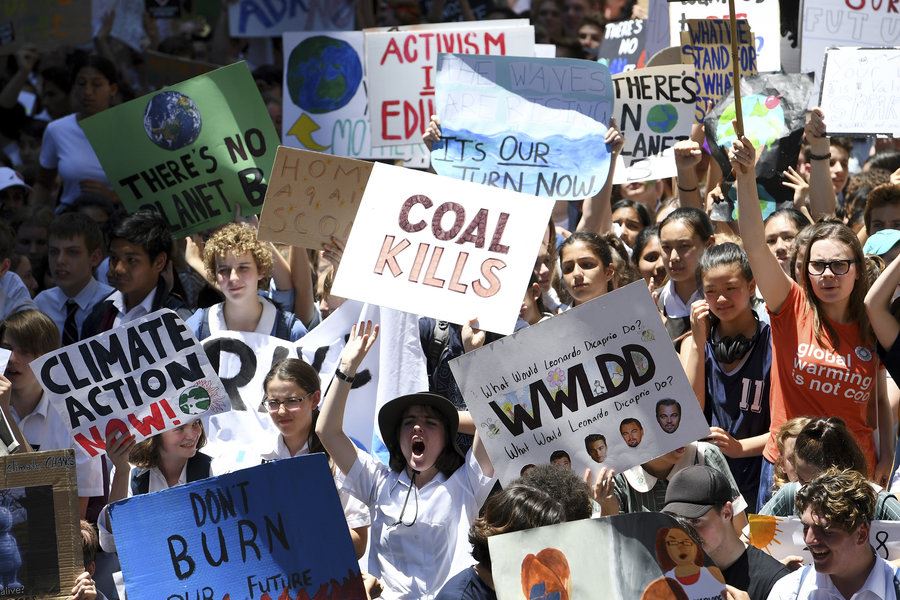 Thousands of students gather in Sydney during a rally demanding the government act on climate change. The coordinated rallies were held in close to 30 cities and town on Nov. 30, 2018.Dan Himbrechts AAP Image/APGlobal temperatures are on course for a rise of 3 degrees to 5 degrees Celsius (5.4 degrees to 9 degrees Fahrenheit) this century, far overshooting a global target of limiting the increase to 2 Celsius or less, the United Nations World Meteorological Organization said Nov. 29.

Scientists say meeting a 1.5 Celsius target would keep the global sea level rise 3.9 inches lower by 2100 than a 2 Celsius target, which could give people living on the world's coasts and islands time to adapt to climate change.

The climate projections have prompted some young people to sue their governments.

"Not taking action on something that you recognize is dangerous is a violation of our rights, because we have the right to live," said 17-year-old student Bernadette Veilleux-Trinh, part of a group that is suing the Canadian government.

Official data regularly shows that Canada has little chance of meeting its climate change goals of reducing emissions by 30 percent from 2005 levels by 2030.

ENvironnement JEUnesse, the organization that launched the class action on behalf of under-35s in Quebec province on Dec. 3 said the Canadian government must do more.

"I really feel like this is an emergency for all of us. Words are really not enough when it comes to climate change," said Catherine Gauthier, head of the Montreal-based youth climate advocacy group.

Across the border in the United States, the second largest contributor of carbon emissions after China, 21 children and young adults are also taking the government to court.

The group, with ages between 8 and 19 when the lawsuit was filed in 2015, accused federal officials and oil industry executives of violating their due process rights by knowing for decades that carbon pollution poisons the environment but doing nothing about it.

“These are people who are put in office to work for the general public, but they keep taking actions that are directly linked to worsening climate change,” said Oregonian Avery McRae, 13, who is one of the plaintiffs.

President Trump, who vowed to withdraw from the Paris deal, has argued the accord would hurt his nation's economy and provide little tangible environmental benefit.

Mr. Trump and some cabinet members have repeatedly cast doubt on climate change science, despite a recent government report projecting that climate change will cost the US economy hundreds of billions of dollars by the end of the century.

“I am worried about my future. The future is what I’m fighting for. This is a global movement, and we need everyone on board,” Ms. McRae said.

This story was reported by the Thomson Reuters Foundation.