These poetic and powerful words were excerpted from a speech given at The Hague Appeal for Peace Conference by Farliz Calle, one of the leaders of the The Children's Peace Movement, who has been nominated for the Nobel Peace Prize

I had the opportunity to meet these children at the premiere of the CNN documentary, SOLDIERS OF PEACE: A CHILDREN'S CRUSADE, that was executive-produced by Kathy Eldon. The film documents the courageous work of the 2.7 million-strong Children's Mandate for Peace and Rights in war-torn Colombia.

Watching the five teenage leaders of the movement speak after the movies' recent premiere, I was struck with how young and sweet they looked. Like most kids, they were thrilled to have gone to Disneyland. Yet the reason they were in Los Angeles to share their stories with our kids....to inspire our kids....was to help stop the violence that not only permeates Colombia, but our own backyards as well.

Decades of drug trafficking and guerrilla warfare have made Colombia one of the most violent countries in the world. Elections are usually targeted by many different armed factions, including the military. In the face of death threats, these brave children asked for a "Day of Tranquility", and all armed groups complied.

On October 25, 1996, 2.7 million Colombian children, ages 7 - 18, voted overwhelmingly for the right to life, the right to peace and the right to family. This special election birthed the Children's Mandate for Peace and Rights. One year later 10 million adults voted for peace.

What makes children risk their lives every day for peace? These five activists/Nobel nominees each began their pursuits of peace after experiencing anguish and personal loss.

Juan Elias Uribe, 17, had no idea of the real effect of violence until his father, a local doctor who spoke against the rampant killings, was slain. Juan has now joined the ranks of the 1.5 million displaced people of Colombia, trying to start a new life.

For some time after his father's murder, Juan thought about withdrawing from the peace process. But it was his father who instilled peaceful beliefs in Juan, and now nothing can stop his own quest for peace. He believes: "If you harvest a child of peace you'll have an adult who will not be violent."

Mayerly Sanchez, 15, lost her best friend Milton to a Colombian gang. Mayerly feels a strong connection to her murdered friend, and his spirit inspires her workshops. There children try to find solutions to the problems the adults started. She states: "Peace starts in our homes. We cannot spread peace in our society if we don't have it in our homes." 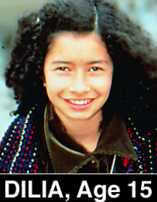 Dilia Lorenzo, 15, wanted to improve the situation for children and stop the wave of violence. "What good is it to be afraid? We have a choice. Enough is enough and we won't accept this anymore. We demand change." Dilia uses her radio show at school as a tool for peace. She would like to show the rest of the world the lovely face of Colombia, the one that exists beyond the violence.

Wilfrido Zambrano, 17, comes from Apartado, the most violent of Colombian villages, where bodies litter the streets. He has had to move to a secret location because of threats on his life. Wilfrido, raised in violence, has chosen the path of peace. A play therapist, he uses sock puppets to teach kids how to put hurts and grudges behind them and reach forward towards their goals.

Farliz Calle, also grew up witnessing the kidnappings and random killings in the streets of Apartado. There came a moment when she was so sick of all the killings, she started thinking what she could do in her school, church, her neighborhood. She is studying to be a psychologist at the University of the Andes, to help people unnecessarily affected by the armed conflict. "We want to show that in acute crises, children need to make up part of the solution. People say children are the future of a country, but we're not the future, we're the present. We have to build together."

At the peace conference in The Hague, Farliz was lucky enough to meet her hero, Rigoberta Menchu, the Guatemalan Nobel Peace winner /campaigner for human rights, who worked especially on behalf of indigenous peoples. 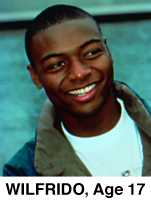 Farliz spoke of the nobility and simplicity she inspires, "Many times in Colombia I felt like throwing in the towel, but I realize it's not fair to suddenly stop the fight, that it is necessary to keep working." Rigoberta replied, "I know that working for human rights takes a lot of courage and you can't find that alone."

Farliz ended her speech with the following words: "We can't change the whole world alone, but if I can teach people that if you put your hand in mine and little by little we join more hands...maybe we can construct a new world."

There are many organizations including, among others, UNICEF, The Red Cross, Save the Children, World Vision, the Catholic Church and REDEPAZ that have supported the Children's Peace Movement. But the visit in 1996 of Graca Machel (the current wife of Nelson Mandela), when she collected material for her United Nations study on the impact of armed conflict on children, seems to have been a major turning point for many. She was the spark that ignited the flame for peace that glows brighter every day.

Rigoberta Menchú - : The Guatemalan Nobel Peace winner and campaigner for human right who they met in La Hague. One of Farlis Calle personal heroes
The Hague Appeal for Peace Conference - : The web site of the international peace conference that was held on May 11-15, 1999, in The Hague, the Netherlands