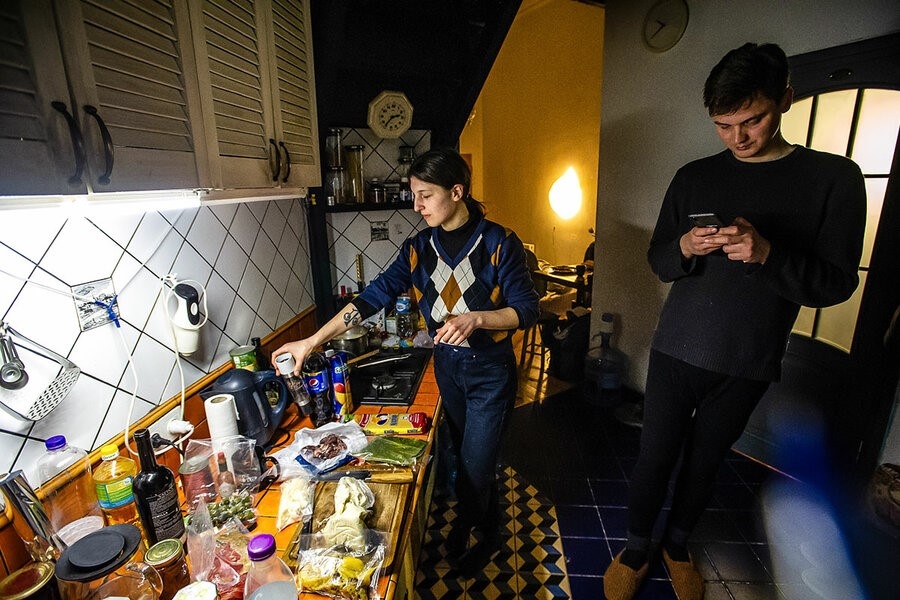 Ukrainian chef Diana Khalilova makes a gourmet dinner for friends in the apartment they share in the strategic Black Sea port city of Odessa, on March 8, 2022. Ms. Khalilova is one of a number of young Ukrainian professionals whose lives have changed direction since the Russian invasion of their country; she now attends basic military training and cooks as a volunteer at a kitchen serving Ukrainian security forces and those displaced by the war. Scott Peterson/Getty Images/The Christian Science Monitor

Ukrainian cook Diana Khalilova is in her happy place, working her wizardry in the kitchen to delight the taste buds of hungry friends.

But she’s not at the food and wine bistro where she normally works – it closed when Russia invaded Ukraine in late February. Instead, the young cook is in a cramped kitchen, after curfew, throwing together a bulgur risotto for her 20-something housemates brought together by war.

The tools of flavor are the same: pouches of pre-prepped delicacies brought home from the restaurant to eat so they don’t spoil, such as anchovy and shredded onion paste, wild mushrooms, and salty goat pecorino cheese.

As snow falls outside, the thick-walled 150-year-old apartment – with its high ceilings and artistic touches (an illustrator and musicians live here too) – fills with the mouthwatering aroma of frying onions and garlic.

Yet it is not long before the war intrudes upon the conversation, bringing with it a boiling anger at Russian attackers.

“Today we learned how to shoot; it was so much fun,” says Ms. Khalilova, about a session for volunteers to learn assault rifle basics. It was the first time she had ever touched a gun.

“I’m a complete pacifist – I never thought about arms and weapons,” she says while scoring several locally produced brie cheeses for baking.

“But today I am so ... angry,” Ms. Khalilova says, using an expletive. “I am so shocked at all the damage and cruelty. I just want to – I don’t know – I just want to kill these Russian [invaders] by my own hands.” 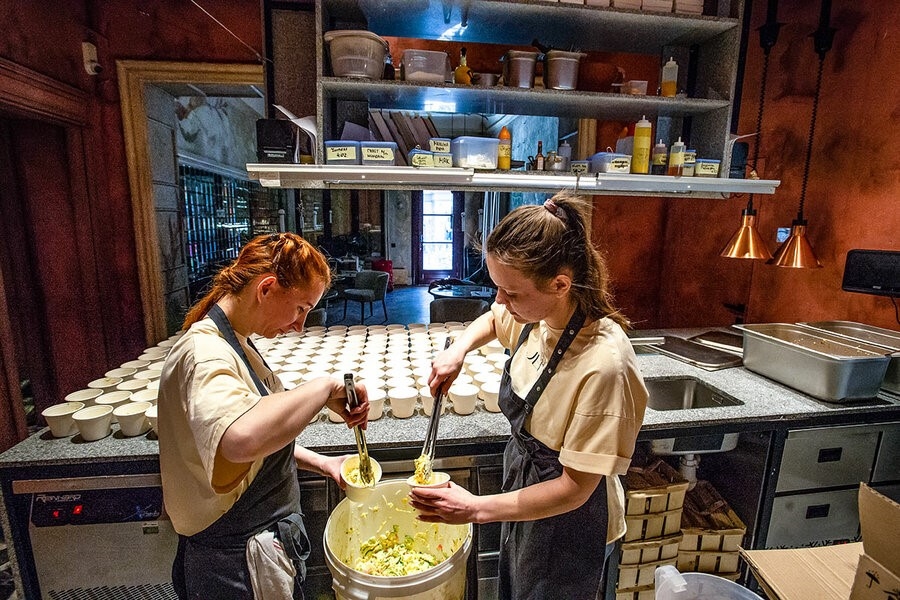 Scott Peterson/Getty Images/The Christian Science MonitorUkrainian chefs at the gourmet Jela Restaurant prepare salad portions for volunteer organizations, as Ukrainians ready for an expected Russian military assault on the strategic Black Sea port city of Odessa, Ukraine, on March 15, 2022. The restaurant closed after the Russian invasion, but the kitchen produces meals for civil defense and other volunteers.

The cook may not join actual combat. But she is one of legions of young Ukrainians whose trajectories have been upended by Russia’s invasion and who are now temporarily reorienting their daily lives.

Largely unprepared for the impact of Russia’s three-pronged assault, which has enveloped Ukraine and triggered an outpouring of global support, many young Ukrainians are finding unexpected purpose for their seething anger in renewed national pride, and by taking personal action on behalf of a greater cause.

“Now I am just trying to be useful,” says Ms. Khalilova, who these days often serves at a volunteer kitchen, cooking food for security forces and for Ukrainians displaced by the war.

“I love to make delicious food,” she says. The place where she volunteers was a center for feeding homeless children, she adds. “They just took on more responsibility.”

Dreams of being a chef are on hold, thanks to the war. She brushes garlic skins off the cutting board, then picks up a gourmet pouch. “Fermented lemons!” she exclaims. It is not the sort of delicacy that she expects to be using much in her new role. 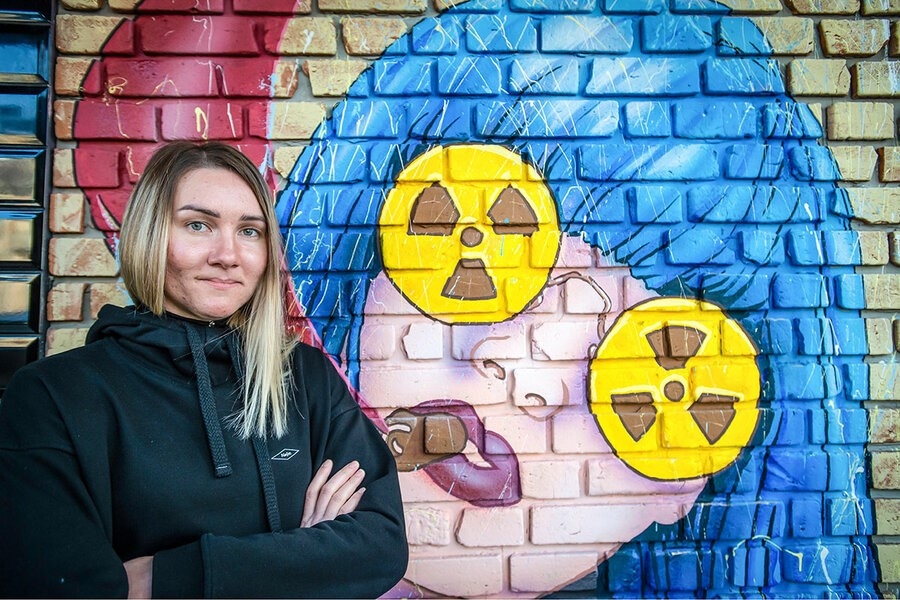 Scott Peterson/Getty Images/The Christian Science MonitorUkrainian lawyer Kseniia Havrina poses for a portrait beside a wall painting in the strategic Black Sea port city of Odessa, Ukraine, on March 13. Ms. Havrina is one of a number of young Ukrainian professionals who have repurposed their lives since Russia’s invasion of Ukraine in late February, joining civil defense efforts.

A few blocks away in this historic Black Sea port city – expected to be the final target of Russia’s southern advance, with Russian warships lurking off the coast – another young professional Ukrainian is putting the parameters of her life on a wartime footing.

Chief legal counsel for an information technology firm, Kseniia Havrina lost her job last week when her company downsized. Now her dream of setting up on her own has been inadvertently fast-tracked.

When the invasion began, the first bomb she heard prompted a frantic Google search for the contents of the emergency suitcase used in the sitcom series “The Big Bang Theory” by the show’s nerdy intellectual character Sheldon Cooper.

Ms. Havrina packed the essentials, from key documents to phone chargers, and raced across the border to safety in Moldova. Almost immediately she had second thoughts, because her mother and sister were stuck in bomb shelters in “a very hard part” of the capital, Kyiv.

Telling her mother that she was – and still is – safe in Moldova, Ms. Havrina drove back to Odessa on the fourth day of the war with jugs of gas and motor oil to make Molotov cocktails. She teamed up with a friend she had recently met on the Tinder dating app, and began to live with a small group in central Odessa, which today inspires her with its devoted volunteerism.

Now the lawyer ferries vulnerable Ukrainians to the border in her car, and helps her housemates to fill sandbags and prepare Odessa’s civil defense.

The number of volunteers wanting to join the Territorial Defense force is so high, she says, that even a young man working with the police, who lives with her group, has found it impossible to bribe his way into a unit.

Ms. Havrina has been awed at how the war is changing Ukrainian society, and the priorities of young people like herself.

“I have never seen people so unified as now. It’s everywhere, in shops, on the streets; people are talking to each other, and it’s so inspiring,” she says. “It’s not Ukraine, it’s a New Ukraine.”

Her new project aims to help Ukraine’s IT army wage the information war against Russia.

Her first step was to petition the office of President Volodymyr Zelenskyy, asking that IT specialists be exempt from rules forbidding men from leaving Ukraine. They can do more effective work for the war effort if they are allowed to use their expertise, says Ms. Havrina, rather than adding one more gun to the front line.

Her experience in the month of violence since Russia attacked – and since Ukraine began rekindling its national spirit – allows only one prediction, she says: “I don’t believe, I am sure that Ukraine will win.”

For Ms. Havrina, that means being ready to throw Molotov cocktails from her balcony, if Russian troops ever appear below.

She doesn’t think Russian President Vladimir Putin will survive the conflict with Ukraine, and adds, “I suppose he understands that we are unbreakable.” 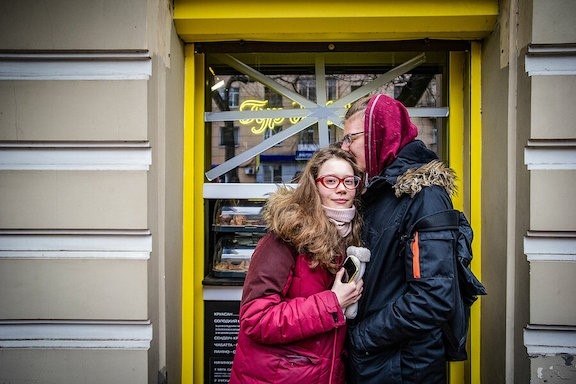 Scott Peterson/Getty Images/The Christian Science MonitorA Ukrainian couple hold each other in front of the takeaway window of a coffee shop in Odessa on March 7, as residents of the port city prepare for an expected Russian military assault.

Supplies for the distant front

That is the calculation, too, on the other side of town at a coffee shop with a bicycle racing theme, where most customers these days come only to the takeaway window – which is taped, to minimize potential blast damage – between air raid sirens. On one recent frigid day, a couple hold each other while waiting for their coffee.

Inside, a pet dog roams and donations pile up, from bandages to tea, which will be delivered to army outposts up to 60 miles from Odessa.

“A lot of people are afraid to go outside the city ... because of the danger,” says owner Gregorii Bayrak, a bearded and lean bicycle racer whose network of cyclists is among soldiers deployed at those distant camps.

“We are sure those outposts will be the first to meet the enemy,” says Mr. Bayrak, who works directly with army officers to fulfill their needs. He says he is worried, but has “no time to panic” because he is so busy with volunteers.

“Our military is now feeling the support of the world,” he says. “Being in the Ukraine army now is one of the most romantic positions in the world,” he adds with a smile.

“A lot of people didn’t know it, that this country is worth something, worth fighting for. We didn’t feel that before,” he says. “When I think of my own role, I will take a gun or Molotov cocktail, but now I am more an organizer.”

For Mr. Bayrak, that means more than just collecting tins of food. 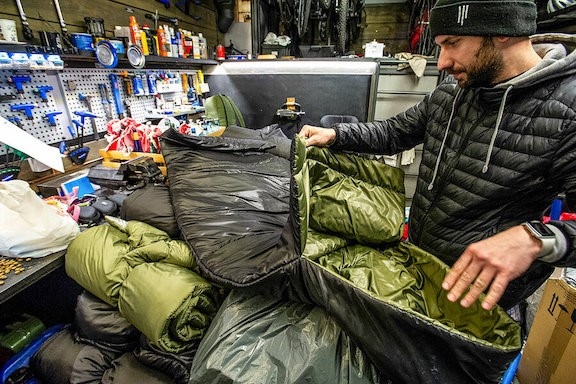 Scott Peterson/Getty Images/The Christian ScienceA bicycle repair shop in Odessa has been converted into a production line for homemade Molotov cocktails and sleeping bags for Ukrainian security forces. Residents of the port city have flocked to civil defense projects as they prepare for an expected Russian military assault.

He steps out onto the sidewalk, and at a shopfront nearby raises the graffiti-covered metal door. Inside is a bicycle repair workshop, its air thick with the smell of gasoline and oil, which has been converted to make Molotov cocktails and homemade sleeping bags for soldiers.

The production line made 170 Molotov cocktails on the first day, then 450 the second. But then production switched to making sleeping bags for troops, and finding tactical gear like gloves and kneepads.Why the change?

Explains Mr. Bayrak, “A lot of people are doing Molotovs ...