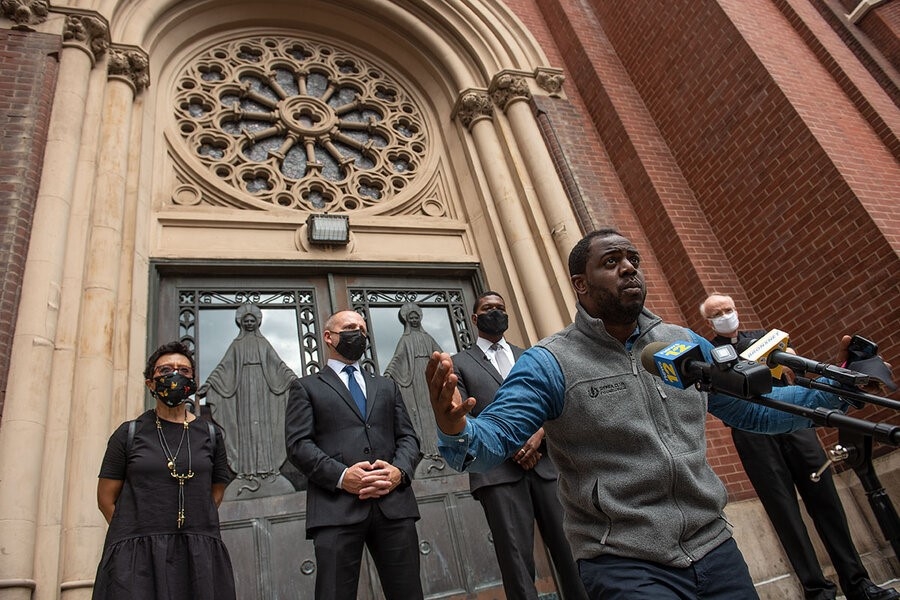 Donnel Baird, founder of BlocPower, speaks on Sept. 20, 2021, during a tour of environmental upgrades his company made to Immaculate Conception of the Blessed Virgin Mary Roman Catholic Church in the Bronx, a borough of New York. The tour, organized for Environmental Protection Agency Administrator Michael Regan (third from left), was followed by a discussion of environmental justice and the future of clean energy.Ann Hermes/Staff

This week, world leaders are gathered at the United Nations General Assembly for Climate Week NYC 2021, in search of unifying strategies to solve a series of daunting challenges related to climate change and the pandemic. The official overview reads, “The choices we make will either secure human, economic and environmental health for generations to come, or reinforce old patterns that are destroying nature and driving societal division.”

The urgent need for deep cuts in emissions follows an International Energy Agency report predicting that global energy-related carbon emissions will surge in 2021, as coal, oil, and natural gas usage returns from last year’s unprecedented declines during the height of the pandemic.

We’re in a complicated moment,” Mr. Baird says. “Companies, Silicon Valley, Wall Street, and governments are trying to figure out what we can do to address climate change. For me, morally and ethically and as a father, we have to reduce greenhouse gas emissions in the U.S. now, and there’s no better path to dealing with climate change other than by greening buildings.”

Over the last decade, Mr. Baird’s company, BlocPower, has retrofitted more than 1,000 buildings in New York and has begun branching out to Oakland, California; Los Angeles; Chicago; Milwaukee; Minneapolis; Philadelphia; and Washington.

I first learned about Donnel Baird from Lynn Schenk, director of Harvard Business School’s Business and Environment Initiative. She puts Mr. Baird at the top of her list of “climate change heroes.”

Clay Nesler, global lead for buildings at the World Resources Institute’s Ross Center for Sustainable Cities, says Mr. Baird’s company offers “a really thoughtful solution.” He was unable to name another U.S. company or individual having a similar impact on upgrading the efficiency of old buildings.

Buildings are the largest contributors to greenhouse gas emissions, more than transportation,” Mr. Nesler says. “The technology solutions are there. They pay for themselves by lowering the costs of utility bills. The challenge is finding financial models to pay for the upfront costs of retrofitting. 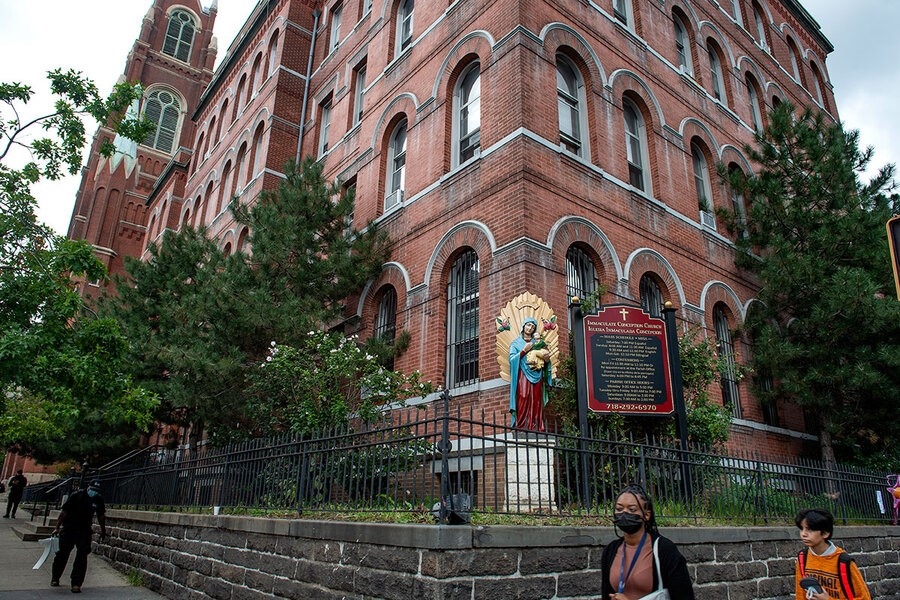 Ann Hermes, StaffThe Immaculate Conception of the Blessed Virgin Mary Roman Catholic Church in the Bronx is shown on Sept. 20, 2021. BlocPower, a startup that retrofits buildings, installed LED lights, a Wi-Fi supernode, and an energy efficient boiler at the church and connected school.

So what is Mr. Baird’s secret sauce? Why does he appear to be a unicorn in the field of retrofitting?

“I guess I’m dumb and stubborn,” he says, laughing. “I know other CEOs who have tried to build what we’re building but they’ve moved on.”

Mr. Baird believes his success starts with building trust in low-income communities, using a community organizing technique he learned before and during the “Obama for President” campaign. Specifically, he partners with religious organizations.

“Community organizing teaches you how to build trust where people have lost faith with many institutions,” he explains. “We partner with houses of worship because it helps us build that trust. A local pastor or rabbi or imam can help generate goodwill for our business. And from there, we work with individual homeowners.”

A Duke and Columbia Business School alum, Mr. Baird uses software to identify opportunities for heating and air conditioning improvements and, after making them, redirects the energy savings to homeowners and his investors. “We have been conservative in our estimations for customers, but we are proud that we’re generating 10% to 70% savings in energy costs and consumption,” he says.

Armed with millions of dollars of Wall Street financing (secured after 200 initial rejections), he has the upfront funds needed to seed BlocPower’s activities. But he admits that after a few years of profitability, he has been plowing his own proceeds into growing the business.

Some 15 years ago, former Vice President Al Gore sounded the climate change alarm with his Oscar-winning documentary, “An Inconvenient Truth.” On Sept. 14, Mr. Gore noted the anniversary when he addressed a virtual audience for the Ocean Conservancy. Mr. Gore thinks that now, finally, the U.S. is nearing a political tipping point on climate change. “The impacts are hard to ignore,” he told listeners. “One out of three Americans has endured a weather disaster within the last 90 days!”

Mr. Gore and Ocean Conservancy CEO Janis Searles Jones pointed to progress within a number of sectors. Industries are becoming more sustainable and efficient, she said, specifically citing shipping. And she praised movement in the investor community, a few days after Harvard University, for example, announced that it would no longer invest in the fossil fuel industry.

The former vice president heaped praise on young people rising up as well as on the climate and environmental justice movements. He cited the Black Lives Matter movement and numerous campaigns against environmental racism in states like Tennessee and North Carolina, and in Louisiana’s so-called Cancer Alley. 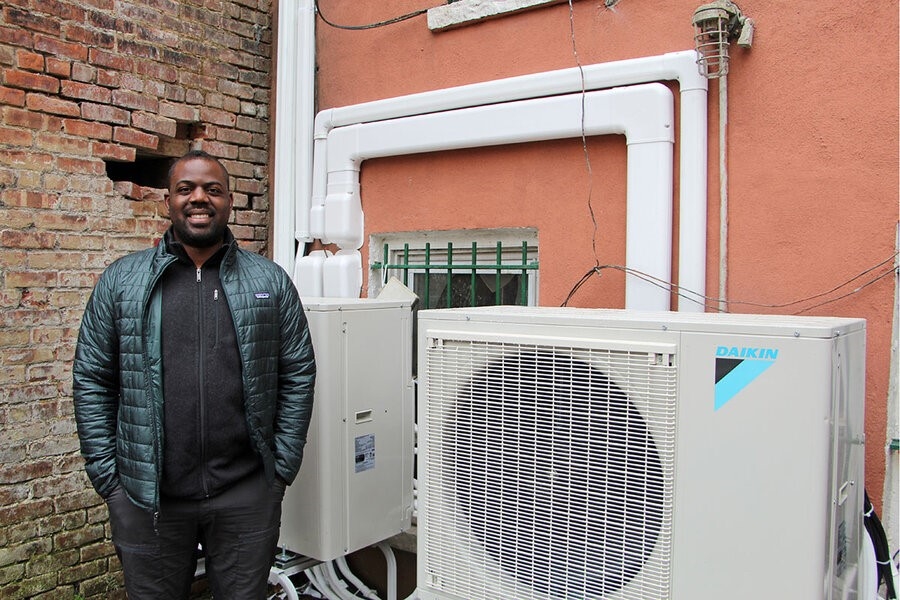 Beyond buildings to communities

That brings us back to Donnel Baird. His ambitions go beyond retrofitting buildings to retrofitting inner-city communities as well as individual lives. On Sept. 15, he and New York Mayor Bill de Blasio announced a $37 million climate tech workforce program to bring 1,500 jobs to communities fighting gun violence.

Said Mr. Baird: “We have a team in Queens right now, helping to dig out a homeowner where her home’s been flooded. In the Bronx we’re installing a community-owned internet system, so that up to 200,000 low-income families have free access to the internet. … We have workers in this program who are in Brooklyn visiting buildings ... where we’re going to move those buildings from burning oil or gas to 100% clean electricity.”

Mr. Baird’s workforce initiative is a solution to yet another problem that vexes him: job and wealth creation in communities of color. As he explains, “We have a shortage of skilled construction workers in America. There can be a three-month wait for a plumber! We must train our young people – even those who might have been in prison – to be plumbers and welders and electricians. A welder can earn $100,000 a year. We need skilled workers in America.”

But Mr. Baird’s ambition and influence extend beyond the United States. He is scheduled to speak at a climate change conference in Portugal next month, before traveling to Glasgow for the 2021 United Nations Climate Change Conference (COP26) in November. WRI’s Clay Nesler tells me the global convening will focus on buildings on Nov. 11, the first full day devoted to the topic since the Paris accords were signed in 2015.

“The United States has made commitments that we will pay in and help other countries reduce their emissions,” Mr. Baird says. “And we haven’t. I want to see how seriously to take all of this.”

Despite juggling greenhouse gas-reduction innovations, interconnected routes to progress in inner-city neighborhoods, and working to save the planet at macro and micro levels, Mr. Baird appears undaunted.