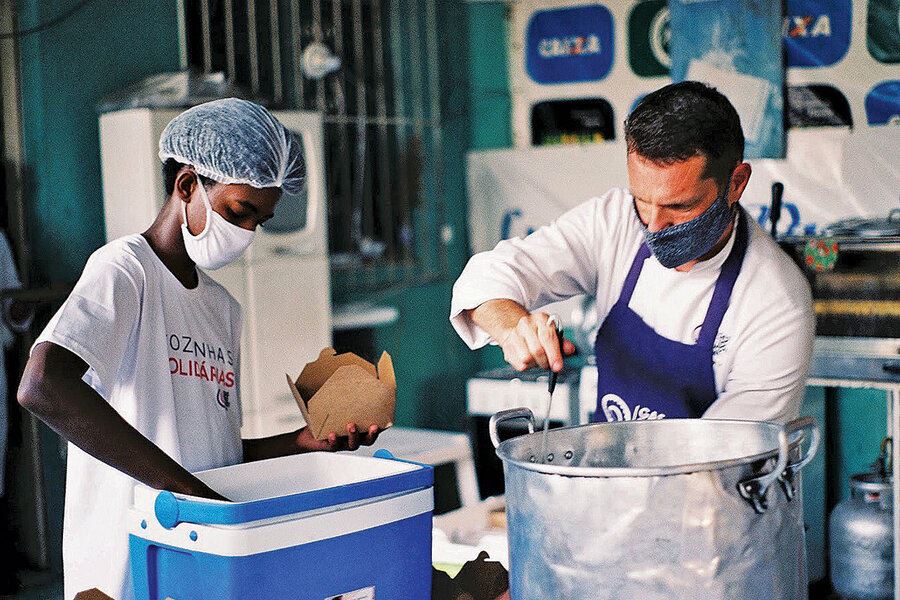 Through this Gastromotiva program, current and former students of the nonprofit, many of whom lost their jobs because of the pandemic, have turned their home kitchens into small delivery restaurants. Above, two people work in such a kitchen in Rio de Janeiro.Courtesy of Alexandra Karmirian/Gastromotiva

That broad view is the beating heart of Gastromotiva, the nonprofit Mr. Hertz founded in 2006. Operating out of Rio de Janeiro, it offers vocational kitchen training, nutrition programs, and food education to residents from low-income communities. Today more than 6,000 people have graduated from the school, many of whom have gone on to launch restaurants, food banks, and soup kitchens in their own communities.

In recent years, Mr. Hertz has sought to share his ideas – and spur change – well beyond Brazil, co-founding a “social gastronomy movement” in 2018. Such efforts are part of a larger trend, gaining prominence globally, in which food is used to accomplish a variety of societal goals.

When life goals and world problems intersect, solutions are often born. David Hertz looked at food insecurity and saw local culinary training, among other things, as a way out.

“I’ve learned that food can be the engine of systemic change,” says the Brazilian-born chef. “That change has to come from within a person and it has to be local, but I’ve seen how people can become change-makers in their own communities.”

With COVID-19 exacerbating already daunting levels of hunger and unemployment worldwide, Gastromotiva’s work is more critical than ever, Mr. Hertz says. About 690 million people, or 8.9% of the world’s population, experienced persistent, gnawing hunger in 2019 – the most recent data available from an annual study by the United Nations. In Brazil, some 10 million people live in food insecurity.Since the pandemic exploded in Brazil, the nonprofit’s food bank has cooked and distributed nearly 100,000 meals for homeless and vulnerable people, and distributed more than 55 tons of food.

Born and raised in the Brazilian city of Curitiba to one of 2,000 Jewish families, Mr. Hertz says his earliest and fondest memories of cooking involve his grandmother Maria Tena Hertz, who died last year at the age of 96.

“I lost my mother when I was very young and spent a lot of time with my grandmother. She was born in Poland and often made homemade pierogi. I always connected to Jewish food,” he says.

Growing up he was involved in the local Jewish youth movement, and in 1992 he went to Israel where he worked on a kibbutz for about 18 months. After that he spent seven years backpacking around the world with stops in India, Vietnam, China, and other countries.

It was an eye-opening experience. For the first time Mr. Hertz witnessed the extreme poverty much of the world bears.

Upon returning home in 1998, the then-27-year-old enrolled in Brazil’s first culinary training program.

“Most of the students came from low-income communities, and I began to recognize how privileged I was. I had a family who supported me; I had education,” he says. “I had connections that I knew would help me get a job afterwards. Not everybody has that.” 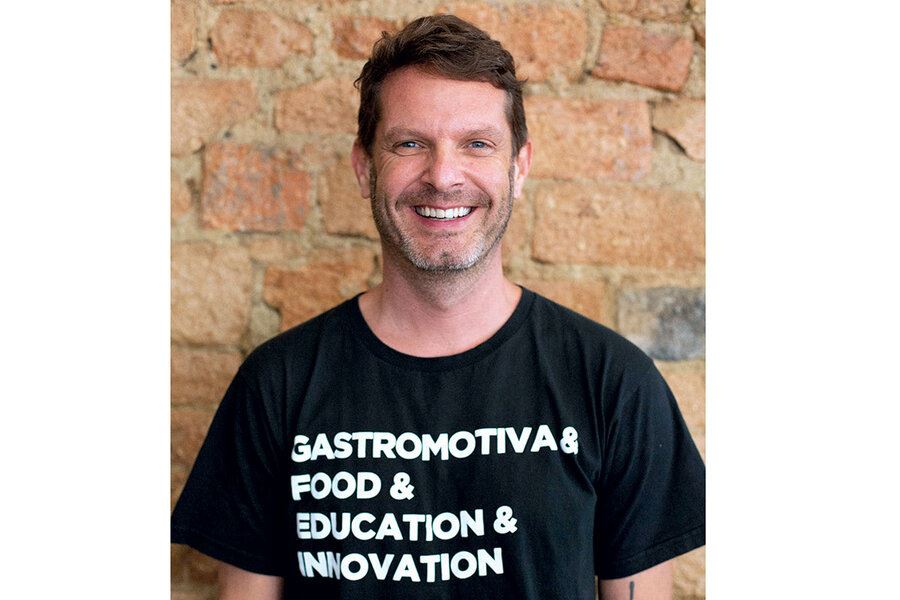 David Hertz founded the nonprofit Gastromotiva in 2006. Through the training it offers, many people have gone on to launch restaurants, food banks, and soup kitchens in their own communities.Courtesy of Alexandra Karmirian/Gastromotiva

In 2004, he made his first visit to a favela in São Paulo. After spending the day walking the streets with a friend, speaking with the people in the neighborhood, he returned home. He kept thinking about the sheer number of people living in poverty and how there appeared to be few opportunities for empowerment. As he reflected, he realized he could use his skill set to help make change. And so rather than pursue a career in a restaurant, he decided he wanted to bring the cooking and managerial skills he acquired in culinary school to as many people as possible.

“I also realized how food can be linked to social justice and social change,” Mr. Hertz says.

To that end Gastromotiva offers a free, three-month course that teaches students kitchen skills and hospitality. The school operates in Brazil and Mexico City, as well as El Salvador and South Africa through the U.N. World Food Program.

As part of its vision, the nonprofit also runs a program called Solidarity Kitchens. Through the program current and former Gastromotiva students, many of whom lost their jobs in restaurants and hotels because of the pandemic, have turned their home kitchens into small delivery restaurants. The cooks get financial help, food donations, and supplies from local farms and businesses. Healthy and free meals are then delivered to their neighborhoods’ most vulnerable residents.

Today Gastromotiva is on track to serve 1 million meals a month from 300 Solidarity Kitchens. There are plans to open 100 more by year-end.

At one such kitchen, called Equipe Cozinha, Rodrigo Sardinha took a break to talk about how Gastromotiva has affected his life

Before he tried his own hand at making pasta and cooking fish, Mr. Sardinha used to watch his father cook. Then he started cooking meals for small groups of friends. He loved the camaraderie that cuisine can bring, but he was unsettled on what to do for a living.

“I wasn’t from a poor family exactly, but I didn’t have so many opportunities,” Mr. Sardinha says in a Zoom interview, with stacks of cardboard boxes standing behind him, filled with meals to be distributed to residents of Lapa, a neighborhood in Rio de Janiero.

He heard about Gastromotiva and enrolled. The decision was life-changing, he says“I received offers from restaurants after I graduated, but because I know Gastromotiva has the power to transform lives, I wanted to be a part of that. It’s not just about food, though. It changed my life in a better way. I didn’t learn just to be a technical cook; I learned to be a better person and to look out for others.”

In the past few years, Mr. Hertz has looked for ways to bring the philosophy of Gastromotiva to the world stage.

In 2018, while attending the World Economic Forum in Davos, Switzerland, Mr. Hertz helped establish the social gastronomy movement with financial assistance from the agriculture and food company Cargill. The movement now has chapters in more than 38 countries, including the United States. Aside from running enterprises similar to the Solidarity Kitchens, these chapters use locally sourced ingredients, highlight local farms, and provide educational material about nutrition and sustainability. Additionally, Mr. Hertz works to bring together other nonprofits, social justice groups, and chefs to deliver healthy meals to high school students and teach incarcerated people how to cook, among other things.

“We are a big family that is united throughout the world,” Mr. Andrés said in a conversation with Mr. Hertz for a Gastromotiva Instagram Live event. “I want to be with people who want to build bridges through food. We are not going to change the world if the business we do is not sustainable. We have to be pragmatic.”

A World Economic Forum young global leader, an Ashoka fellow, and a TED fellow, Mr. Hertz also recently received The Charles Bronfman Prize, an annual award of $100,000 for a humanitarian under age 50 whose innovative, entrepreneurial work has improved the wor.

“All over the world there are people who have been left behind,” he says. “We are trying to bring the pillars of being a chef – discipline, organization, teamwork, creativity, and an entrepreneurial mindset – to help. We’re not saying we can solve the problem entirely, but we can help.”