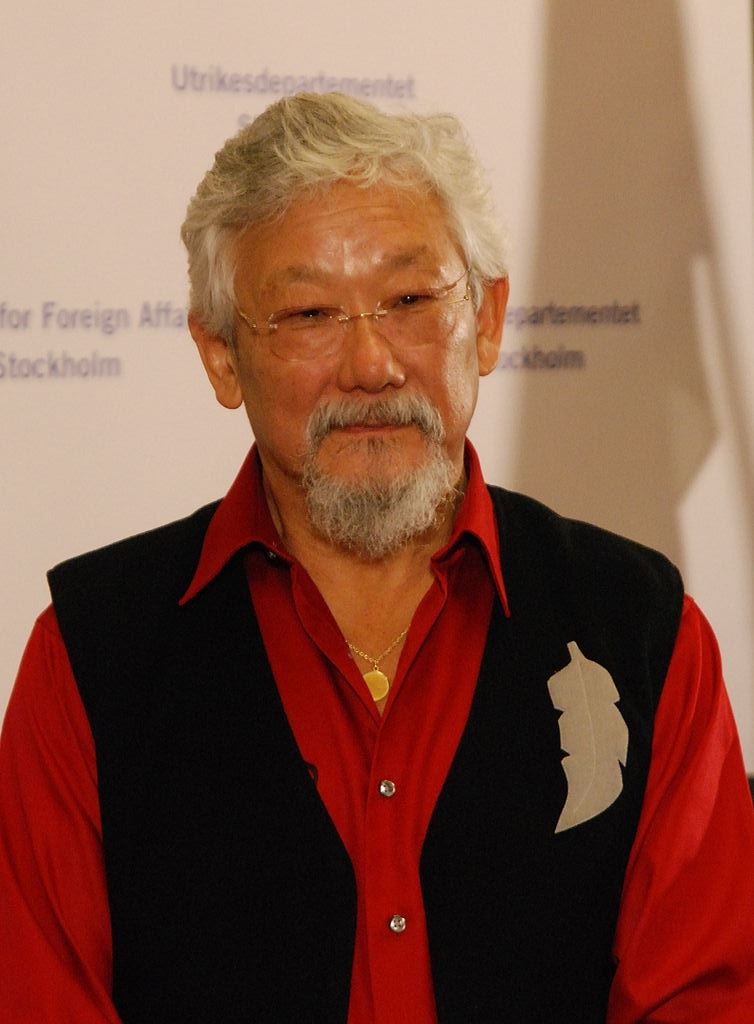 Dr. David SuzukiHolger Motzkau 2010, Wikipedia/Wikimedia Commons“Heroes elevate us emotionally; they heal our psychological ills; they build connections between people; they encourage us to transform ourselves for the better; and they call us to become heroes and help others” (Scott T. Allison). As Allison says, heroes create a multitude of psychological benefits for ordinary people. One of those benefits, elevation, is defined as the euphoric feeling of awe, reverence, and admiration. By reading and listening to the stories of heroes, we experience elevation, which then motivates and inspires us. Heroes create a ripple effect that turns others who listen to their stories into heroes themselves. One such individual has a life story that exemplifies the qualities of a hero and inspires others. David Suzuki, an accomplished science broadcaster and environmental activist, overcomes racial prejudice, motivates people all over the world to use more practical ways of living and inspires others to work hard toward what they are passionate about; accordingly, David Suzuki's life story is one that truly elevates his audience.

Suzuki was born on March 24, 1936, in Vancouver, British Columbia, Canada. His maternal and paternal grandparents immigrated to Canada at the beginning of the 20th century with hopes of finding new job opportunities and starting a new life. Suzuki himself hence became a third-generation Japanese-Canadian. However, 1939 marked the start of World War II, a devastating event in history that took place throughout Suzuki’s childhood. At the early age of four, Suzuki and his family were shipped off to a Japanese internment camp, located in Slocan, British Columbia. There, his days were spent camping, hunting for mushrooms, and exploring in the mountains. Soon after his third sister was born, Suzuki enrolled in a school that opened up about one year into his incarceration. After the war finally ended, Suzuki was let out of the internment camps and went to Amherst College in Massachusetts. There, he earned a degree in biology and later earned a Ph.D. in zoology from the University of Chicago. Suzuki then went on to pursue his dream of becoming an environmental activist.

As a Japanese Canadian, Suzuki faced discrimination and loneliness during his childhood, yet overcame his challenges by being optimistic. Growing up during World War II, Suzuki didn’t receive the same treatment as other children his age, despite being a Canadian citizen. In an interview with Kerwin Rae, Suzuki talks about how he and his family were affected by living in Canada during a time of war: “When the war broke out with Japan in 1941, the Canadian government applied what they called the war measures act which suspends all rights of citizenship, and my family was shipped off to an abandoned silver mine camp in the rocky mountains for three and a half years” (“Why it’s time to think about human extinction | Dr David Suzuki,” 00:01:50-00:02:12). Suzuki explains how just because he is Japanese, his rights of Canadian citizenship were stripped away, forcing him to abandon his home. This gave Suzuki unequal opportunities and a childhood different from the ones many other Canadian citizens had. Rather than stay in his own home, he had to live with his family in a single room within the camp’s dirty, run-down hotel. With minimal living space, Suzuki still had to go through his everyday life as a student, a challenge he wouldn’t have had if he had stayed at home. Furthermore, Suzuki faced severe harassment and racial slurs from children at school. He writes in his autobiography that he was teased in school by Japanese Canadian students for not speaking Japanese and was often called a “jap” or a “chink” by Caucasian students (Suzuki 22-24). Being teased by both Japanese and Caucasian children, Suzuki struggled to fit in with anybody at school. On top of having trouble making friends, being constantly ridiculed would have lowered Suzuki’s morale and self-esteem. If school wasn’t a place where he felt comfortable, it would be difficult for Suzuki to be a successful student and pursue his dreams. However, not fitting in caused Suzuki to spend more of his time out in the wilderness. Suzuki writes in his autobiography: “My loneliness during high school was intense… My main solace was a large swamp a ten-minute bike ride from our house. Any marsh or wetland is a magical place, filled with mystery and an incredible variety of plant and animal life” (Suzuki 31). As a result of not fitting in and being lonely, Suzuki turned towards the wilderness as a way to spend his free time and get away from the worries in his life. He focused on doing what he loved--exploring and experiencing the outdoors--and his struggles with harassment in school eventually transformed into his love for nature. By constantly being outdoors, Suzuki gained a deep appreciation for wildlife. He devoted his life to protecting the earth in order to give back what he gained from it. For those who experienced situations similar to his, Suzuki’s story of turning struggle into compassion is one that elevates and inspires his audience to do the same. In this way, Suzuki overcame issues in his childhood by replacing them with an appreciation and passion for the environment. 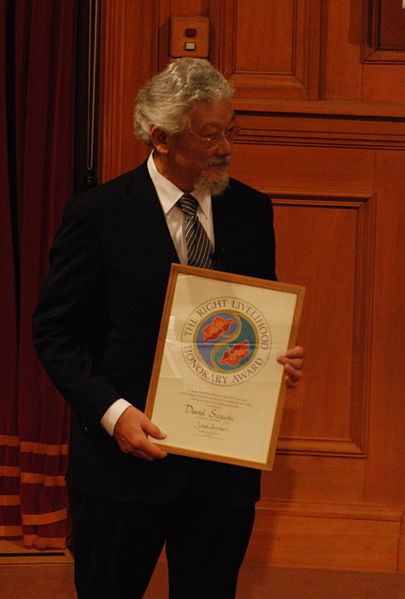 Press conference with the laureates of the 30th Right Livelihood Award 2009Holger Motzkau 2010, Wikipedia/Wikimedia CommonsSuzuki dedicated his life’s work to his passion for nature and saving the environment. After graduating from college, Suzuki pursued his passion for nature by hosting the television show "The Nature of Things." Originally hosted by various people and featuring 30-minute episodes, Suzuki took it over, called for hour-long episodes and renamed it "The Nature of Things with David Suzuki." It then became the longest-running documentary series to ever show on CBC-TV (Bailey and Phillipson "David Suzuki"). "The Nature of Things with David Suzuki" informs its audience about the current state of the world and how to make it a better place. By hosting this show, Suzuki followed his goals of creating a sustainable environment by encouraging others to share his passion. On top of that, Suzuki has been recognized for doing a large amount of work researching and coming up with ways to protect the environment: “He is widely recognized as a world leader in sustainable ecology and has received numerous awards for his work, including a UNESCO prize for science and a United Nations Environment Program medal” (“David Suzuki” David Suzuki Foundation). Being well-known around the world proves that Suzuki is credible and has done much productive work that has benefited people everywhere. His success in the field of science is a product of his hard work and dedication to helping the state of the environment. Recognized with various medals and awards, Suzuki demonstrates his passion for the environment through his many achievements and hard work.

Suzuki spreads his message to others and turns others into heroes by providing them with ways to work towards a better environment and focusing his teachings on children. The way he provides opportunities for ordinary people is through the David Suzuki Foundation: “Founded in 1990, the David Suzuki Foundation is a national, bilingual non-profit organization headquartered in Vancouver, with offices in Toronto and Montreal. Through evidence-based research, education and policy analysis, we work to conserve and protect the natural environment, and help create a sustainable Canada” (“About” David Suzuki Foundation). The David Suzuki Foundation provides people a way to donate, volunteer, and educate themselves on simple ways they can save the environment. Suzuki understands that to achieve his goals, he must recruit other people to help, other people who share his love for nature. When people who care about wildlife are presented with the chance to help out and decide to take it, they also become everyday heroes. Furthermore, Suzuki has written and published over 50 books. One of his books, "Introduction to Genetic Analysis," became one of the most required science textbooks in both Canada and the U.S. (“David Suzuki” Gale). This shows not only Suzuki’s expertise but how the material he creates is useful and does a good job of teaching children. But this, of course, is no mistake. Suzuki aims to inspire and educate others, especially the young, to help him on his mission of saving the environment. A large target audience for Suzuki, children play a big role in his work. By inspiring children to take action, Suzuki ensures that more people will care about the environment in the future. If people learn about the dangers nature faces from a young age, they will be able to show care and take action when they are older, much like Suzuki himself. Children are also a large target audience for Suzuki because it is their future and their children’s future that will be affected, not so much their parents. Therefore, by providing opportunities for ordinary people and by educating children, Suzuki calls on others to help him achieve his goal of a sustainable environment.

David Suzuki is a prime example of what a hero should be. As a science academic, Suzuki works to find ways not only to protect the environment but also for us to live sustainably within the environment. He shows that he cares not only about nature and ecology but also for the future of humanity. Suzuki shows that he wishes for others to share his passion by educating them on the dangers of climate change and by providing solutions to sustainable ecology. By elevating us with his life story of perseverance through obstacles, hard work towards goals, and educating others, he calls us to action, and he calls for us to become heroes ourselves. Without everyday heroes like Suzuki, it would be difficult for people to discover the inspiration and motivation it takes to become a hero. No matter who we are, we can follow Suzuki’s message and work towards our passions, becoming everyday heroes just like Suzuki. The stories of heroes matter because they elevate their audiences and inspires others to become heroes themselves.