Diane Challis Davy had always hoped to work in the theater. After studying at California Institute of the Arts and working a few summers at theaters in England, she returned to her hometown of Laguna Beach, California, to look for work. She landed a job as costume designer for a local arts spectacle called "Pageant of the Masters."

As a child, Davy participated as a volunteer cast member in the Pageant and, over the past two decades, has worked her way up from costume designer to assistant director and, finally, for the past several years as director. She now oversees a staff of artists and technicians of every stripe, and a volunteer cast of approximately 500 people (and the occasional animal).

The Pageant of the Masters is an annual show of tableaux vivants or "living pictures" where people pose as classical and contemporary paintings, sculptures and other works of art. The art form of living pictures originated centuries ago before television and when people entertained each other during their evening leisure time. During that time, people would re-create biblical and historical events and mount them on wagons and parade them about town, making the events more meaningful to the general public (many of whom were unable to read).

In pre-electricity days, pageants had to be presented during the daytime hours. By contrast, the Pageant of the Masters features such highly technical lighting effects that a daytime performance would be unthinkable.

The Pageant of the Masters show in Laguna Beach is a very elaborate and professional artistic event. Preparations for the July event begin in January, and the show runs for 60 days in an outdoor amphitheater to a collective audience of about 140,000 people. Under Davy's direction, since 1996, the Pageant has steadily grown more sophisticated, adding singers, dancers, a choir, and even live animals.

Every year, Davy decides on a theme for the show and selects a series of artworks to reproduce for the event. The theme for 2002 was "Heroes and Heroines." Among the works selected were statues of Athena, the ancient Greek protectress of heroes, comic book art, a George Bellows' depiction of a famous boxing match between Dempsey and Firpo, Joan of Arc, Amelia Earhart, and others that pay tribute to heroes from history, both real and fictional, and express different ideas of heroism.

Davy's love of the annual Pageant, combined with loyalty to Laguna Beach, took a political turn a few years ago when the Festival of Arts Board of Directors reviewed a proposal to move the Pageant to the neighboring City of San Clemente. Together with many Laguna Beach citizens and Festival of Arts artists, Davy, a true community hero, began a quiet, but earnest, fight to keep the Pageant at home. She remembers hearing about the planned move: "Being a hometown person, to me, that was a sacrilege. Behind the scenes we fought to keep the Pageant in Laguna."

She and her allies succeeded, but although the move itself is no longer an issue, Davy suspects that the 2002 theme might have emerged from that struggle. "...I started thinking about the heroes in my own life, local artists, volunteers and our friends in the community who worked so hard to save our Pageant. Research for the production actually began in July of 2001. There were over forty research volunteers who submitted images of their favorite heroes. It was a lot of fun to review the amazing variety of art and sculpture. Of course, the world has changed since September 11, and we had to reconsider the impact of some of our art selections. We also added a tribute to firefighters." Davy adds that when she was a kid, her "number one hero" was Abraham Lincoln. The 2002 Pageant presented recreated paintings, sculptures, and photographs of her number one hero. 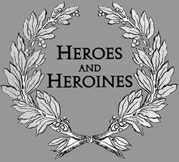 The theme for the 2002 Pageant of the Masters Event was "Heroes and Heroines." This theatre event is held every July and August on the grounds of the Irvine Bowl in Laguna Beach, California. The MY HERO Project showcased heroes from around the world on the festival grounds at our educational outreach booth.

Click here to listen to the Diane Challis Davy story

Diane Challis Davy is celebrated as a community hero in Laguna Beach, California for her outstanding leadership and direction producing and directing the Pageant of the Masters.

View a short film that pays tribute to this artist and visionary. Since 1996 Diane Challis Davy has directed a team of hundreds of volunteers and professionals who bring to life art works from around the world. This amazing multi-media presentation of living art takes place each summer at Laguna Beach's Festival of the Art, Pageant of the Masters.