Deepwater Horizon: What we learned from worst oil spill ever

When a long-term project winds down, reflecting on gains and losses is part of the process. Thousands of experts studied oil spills and the Gulf of Mexico after Deepwater Horizon, the worst oil spill in history.

JUNE 10, 2020 - Christopher Reddy had had it. The scientist had been studying oil spills for 15 years, but he was frustrated that his lab’s work was ignored by both government and industry. He figured it was time do something else. 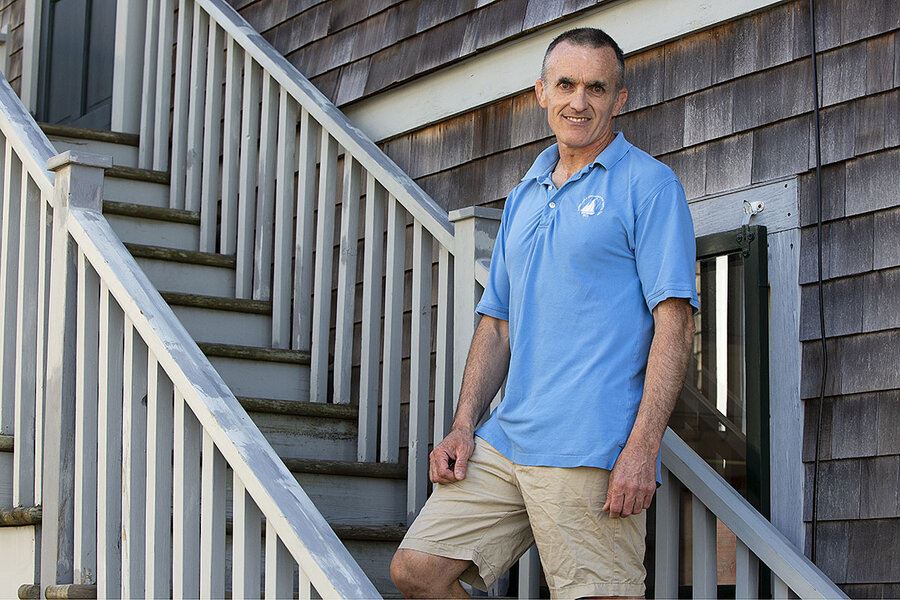 In Woods Hole, Massachusetts, Christopher Reddy is a scientist at the Woods Hole Oceanographic Institution. Dr. Reddy took 76 trips to the Gulf of Mexico to research hydrocarbon pollution, part of a decadelong project involving thousands of researchers.Melanie Stetson Freeman/Staff

“I got a call from a government scientist I knew very well. He said we need someone to go down and do fieldwork. I told him, ‘Nah, I quit science. I’m done.’”

“The guy’s boss, who I was really good friends with, called me several days later, and he said ‘Listen you got to get over this whole ‘quitting this oil spill thing.’ Here’s the deal: You are going to get involved, you will do some good science, it will change your career, and you will make a huge impact,’” Dr. Reddy recalls with a chuckle. “He was absolutely right.”

The eruption at the wellhead a mile underneath the BP Deepwater Horizon drilling rig 10 years ago was a catastrophic disaster: It killed 11 oil workers, injured 17 more, and poisoned thousands of square miles of water, air, beach, and marsh. Millions of marine animals and seabirds died, and the Gulf’s vital seafood and tourist industries were paralyzed, bankrupting workers and businesses. The well jetted more than 200 million gallons of oil and gas into the water for 87 days, until it was finally capped July 15, 2010. 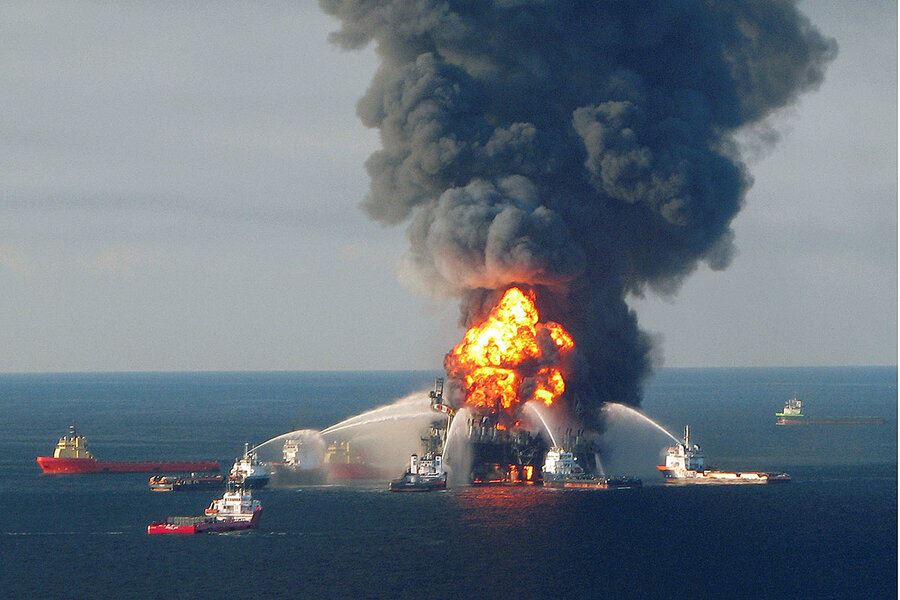 Fire boat crews battle the offshore oil rig Deepwater Horizon off Louisiana April 21, 2010. Eleven rig workers were never found. The rig sank the next morning, and the oil leak was then discovered. The well would eventually discharge an estimated 4.9 million barrels.US Coast Guard/Reuters/File

The harm from the accident, which dwarfed the 1989 Exxon Valdez spill of 11 million gallons, was indisputable. But scientists, while paying homage to the tragedy, say the spill spawned a bonus: 10 years of intense research into the Gulf of Mexico and oil spills.

“It’s been hugely successful,” says Rita Colwell, an acclaimed microbiologist who headed the National Science Foundation and agreed to take a 10-year post to direct the Gulf of Mexico Research Initiative (GoMRI), funded with $500 million from BP.

The initiative lists assistance from 4,400 researchers, involvement of more than 380 other scientific groups, production of more than 3,000 sets of data, and 1,400 published papers, not including research done outside of GoMRI.

“We’ve just been hugely productive. And we’ve worked really hard to keep the public informed,” Dr. Colwell says by telephone from her home near Washington. The program is wrapping up its work with a “holistic” overview of the research, she says.

The conclusions of the science are not unequivocal. The role of dispersants, which were injected in the oil plume underwater for the first time, still remains contentious. But researchers did find that natural microbes ate a lot more of the oil than expected. They also found there’s a narrow window before sunlight converts liquid oil on the surface to a sticky sludge that does not respond to dispersants. 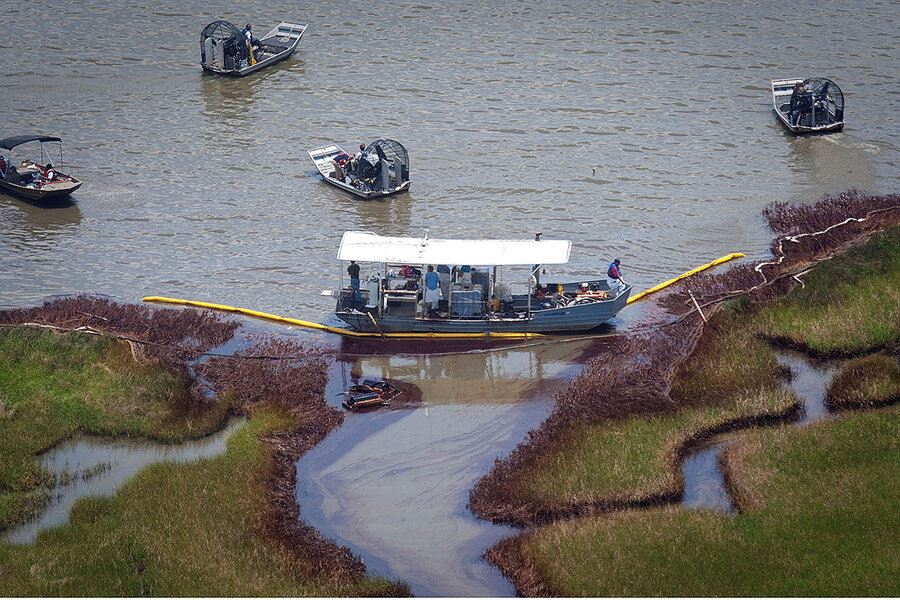 Work crews on boats gather to clean marshland impacted by oil from the Deepwater Horizon spill near Bay Jimmy, in the Barataria Bay of Louisiana, June 17, 2010. About 1,100 miles of shoreline became contaminated in the Gulf of Mexico by the spill.Lee Celano/Reuters/File

They found that many species recovered faster than predicted, while other species were devastated, some for generations. And the researchers established a foundation of data about the ecology of the Gulf of Mexico that had not existed before.

Science often focuses on “the smallest molecule or the smallest microorganism,” Dr. Colwell says. The Deepwater research, she adds, involved many in the Gulf community and points to the need to take a broader view that includes impacts on people.

“It’s not enough to study the physics, or the dispersion of oil or the chemistry, without understanding the social impacts, which were really extensive in the Gulf,” Dr. Colwell says.

“There was a lot of science done,” says Dr. Reddy, who played a key role in the post-spill efforts at the Gulf. “Ten years later we spent millions and millions of dollars to study the spill. We know a lot about this spill.”

But, he says, like many scientists, he is not completely satisfied. He says the initial field work should have included better planning to test and measure different approaches.

“We don’t have a consensus agreement about using dispersants on the bottom of the seafloor,” he notes. With another spill, “we have unfinished business. There’s going to be pushback because they didn’t have the data.”

The BP spill also carried consequences for government, though there is much less consensus on the outcome. Every oil spill is an assault on the environment, but each provides lessons. After an oil well blowout near Santa Barbara, California, in 1969, public outrage helped spawn the first Earth Day and a quick succession of far-reaching federal environmental laws. The Valdez oil spill in 1989 led to the banning of single-hull tankers and navigation safeguards that significantly reduced spills from cargo ships. A May 29 spill of 20,000 metric tons from a diesel storage tank in the Arctic Circle is still challenging efforts to contain it.

Many of those governmental advances have been rolled back under the Trump administration, which has waged a relentless assault on environmental safety and health regulations that stretch back to Richard Nixon’s presidency.

Donald Boesch, a member of the presidential commission, says the government has lost credibility with its own inspectors and the public, as President Donald Trump and his appointees emphasize a desire to “produce more oil and get off the backs of industry,” with safety a seeming afterthought.

There was progress, he says. “We are in a better position to be able to tap a well, cap a blowout, much more quickly than we were,” Dr. Boesch says. And he acknowledges the voluminous scientific research that followed the Deepwater event.

But then I would add to that, so what?” Dr. Boesch says from his home in Annapolis, Maryland. “We have learned a lot about what the oil does in the environment. But I don’t think that science has really put us in a better position to respond to another oil spill like that.” Industry would use much the same cleanup techniques for future spills, he says, and “it would still be pretty ineffective.”

Nancy Kinner, co-director of the Coastal Response Research Center at the University of New Hampshire, argues that the research gives oil spill responders more tools of knowledge. “Now we have a better picture of the whole system, and we understand that if you push here you have a response there.”

“I don’t ever want to say that the Deepwater spill was a good thing. It was a horrible, horrible thing in so many ways,” Dr. Kinner says from her home in Georgetown, Maine. “What I prefer to say is adversity often gives us the best opportunity to become better.”