‘Do something small’: One journalist sees solutions for world’s oceans 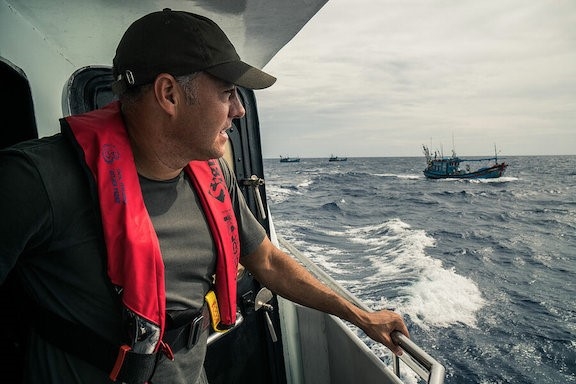 Investigative reporter Ian Urbina, shown on an Indonesian patrol ship called the Macan as it chases Vietnamese fishing boats in a contested area of the South China Sea. Mr. Urbina says that while many people perceive the sea as "vacant, barren, beautiful," some 50 million people work on the world's oceans, many in conditions that violate basic human rights.Fabio Nascimento/Courtesy of Outlaw Ocean Project

Ian Urbina is what you might call a globe-trotting journalist, except he focuses his reporting on the oceans, not the land.

Earlier this year he was honored for his investigative writing by the Society of Professional Journalists, for stories tied to the treatment of migrants in Libya (and off its Mediterranean coast) and disruption in Gambia’s fisheries, published during 2021 in The New Yorker and The Atlantic. Another story from his Libya reporting – about Europe’s treatment of African migrants – ran here in the Monitor.

Now Mr. Urbina’s Outlaw Ocean Project is launching a podcast series based on his work, in partnership with the Los Angeles Times and CBC Podcasts.

In an interview with the Monitor’s Mark Trumbull, he discussed the issues that make oceans important and why, in his words, “I’m going to double down on this.” He also points to paths toward solutions – and hope. The comments have been edited for length.

You explore what you call the “outlaw ocean.” Why are oceans so different from land – and so difficult to police?

From the perspective of governance, you have this situation where the high seas belong to everyone and no one, and therefore jurisdictionally it’s an unusually complicated, murky space. ... The second issue is geography. The reality of the high seas is it’s so incredibly sprawling, two-thirds of the planet. ...

And then when it comes specifically to the category of abuses of crimes that pertain to people – murder on camera and slavery and abuse of stowaways and wage theft and abandonment of crew, you know, all these human rights and labor abuses – a contributing factor to that subcategory of crimes is who’s getting harmed. Most often the victims of those sorts of crimes are poor, are folks from developing nations. ... A lot of them are not literate. A lot of them have signed contracts in languages they don’t even speak. ...

And the boss of the [floating workplace] is from one country. The flag of the factory is to another. The guys working in there, getting abused, are from a third. The catch is being all loaded on a fourth. It becomes just insane.

Many of us might feel like, well, my connection with the ocean is when I buy some fish for dinner. But is it much more than that?

I mean, if you think of the planet Earth as a living organism, maybe metaphorically. It has inherent systems. It’s got lungs. The lungs of the planet – 50% of the air we breathe – are cleaned by the oceans. So the lungs of the planet are at stake. If you think of it as the commercial circulatory system, 80% of our [global] commerce gets to us cheaply and efficiently ... by ship. So not just fish, but iPhones and, you know, tennis shoes and grain and oil. ... The oceans are also a temperature stabilizer of our body, you know, of the body planet. ... They take off a lot of the heat. ...

There is this misconception that it’s ever regenerating. It’s so big, “dilution is the solution to pollution” was the mantra throughout the ’70s and ’80s. ... We’re starting to realize, oh, just because it’s big doesn’t mean it’s utterly durable. 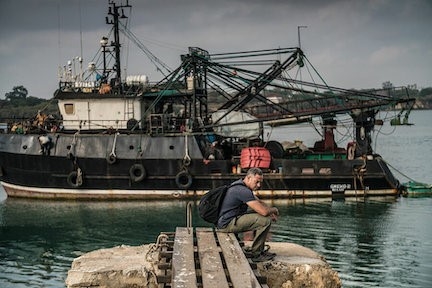 Ian Urbina sits in front of a Greek-owned fishing trawler featured in a story about poaching in Somali waters. He says illegal activity on seas and oceans can be reduced by more effectively using the tools of news media coverage, advocacy, and the law.Fabio Nascimento/Courtesy of Outlaw Ocean Project

So you have a seven-part podcast with the goal of shedding light on these varied challenges that are so often out of sight, out of mind. As we talk about that, I hope to get more positive, but does the stress on the oceans amount to a disaster in the making?

Yes, it is a disaster. But that doesn’t mean we have the luxury of being demoralized. ... Do I think it’s unsolvable? No, I think there are lots of ways in which things can be done to mitigate the disaster and better govern. And a lot of people are doing lots of things in different places, in individual fights, in individual battles.

One episode features the nonprofit group Sea Shepherd chasing down a ship on Interpol’s wanted list for illegal fishing. Does that illustrate some hope for holding the illegal fishing operators to account? [This episode was released today as Part 2 of the weekly podcast.]

And they succeeded. You know, they found the Thunder, which was at that time ranked the top worst illegal fishing vessel on the planet, $67 million worth of illicit catch. And they found these guys – nets in the water – and proceeded to chase them for 110 days all across the planet. And all sorts of dramatic stuff happened in the interim. And ultimately the Thunder – spoiler alert here – sunk itself and all the crew were rescued [off the coast of West Africa]. But they scuttled the evidence of their true bigger crimes, were rescued by Sea Shepherd, handed over to law enforcement, and the officers were prosecuted and served time. So I think there are cases like that where you see various actors make savvy use of the media and the law to try to make a difference.

On the goal of more accountability, how have things been changing and where do we need to go?

I do think there’s ... more media coverage by lots of folks, a lot of good. There’s more wind in the sails of the advocates and the academics who were in the trenches already fighting this fight. Now they’ve got more media behind them. I think you also see more market side players having an awareness that, you know, this issue isn’t going away.

Whether it’s the issue of slavery and the use of captive labor as a cost-saving tactic on fishing vessels, or intentional dumping of oil as a cost-saving tactic, or illegal fishing – meaning going places you’re not supposed to or using gear you’re not supposed to – all these things are cost-saving tactics. And who benefits from that but the companies? And the companies writ large, you know, the ship-owning companies, the insurers, the fish sellers, wholesalers, grocery stores, restaurants, all these market players are the ones who turn a blind eye. ... The decentralization of the supply chain has allowed them to say, “Well, we don’t know what’s happening.” You know, “we outsource” ... and so they can’t be held accountable. Well, I think there’s a reckoning coming on that.

Is there some overarching human value or values that these ocean issues call for?

One can argue this from a utilitarian and highly pragmatic point of view, which is like your sheer existential self-interest. You need to care about these things. And let’s not put any ethical issues in the mix. Let’s just put survival and self-interest in the mix. And you can convincingly argue that you should really care about these things, even the slavery concerns, because that stuff comes back to haunt you.

Or – and I like to do the “and” – or you can argue this from a fundamental humanity, sort of a humanism point of view, which is to say, Hey, look, if I’m benefiting from something that I don’t agree with and I’m confronted by it, then I probably need to do something about that.

This reminds me, you’ve reported on fisheries in Gambia, and the role of Chinese companies on the coast there. Do you see hope for Gambia to regain more agency over its own resources?

I mean, the story of West Africa generally, more specifically Senegal, Mauritania, Gambia, and more specifically with regard to this weird thing called fishmeal, is like a textbook story. ... It’s two guys at a table discussing a contract, but they’re not on equal footing. ... And the beneficiaries of the stuff that China is extracting is you and me. You know, we’re the ones buying the stuff that China is exporting that’s getting fed by [fishmeal from Gambia]. ...

The government of Gambia has no ability to actually check whether the terms of the agreement are being complied with and a sustainable extraction is occurring or an unsustainable extraction is occurring. ... The factories that get built have very few actual Africans working in them. It’s mostly mechanized and it’s almost entirely for export. So the revenue doesn’t stay local and create other industry. ...

Aquaculture fish farming was created in the ’70s to try to slow ocean depletion. [Yet today] all this ground up bonga fish, 30 to 40% of all the biomass pulled out of the ocean, isn’t for human consumption; it’s for fishmeal. It’s to be ground up and to be fed to the high-priced shrimp, salmon, the tuna. ...

So now we’re catching wild caught fish in places like Gambia that historically was eaten by the locals and was free at the market, often, because it was so plentiful. Now the locals can’t touch the stuff because they’re priced out, because it’s all going to the factory to get ground up and exported. That’s the crazy economy we have.

What can the average person do in their own actions? What would you recommend?

First, I’d say, don’t get demoralized and don’t think that you should or can solve the war. Just think about battles, and choose which of the many battles interest you most, whether it’s sea slavery or plastic pollution or whaling or illegal fishing or murder and violence at sea or whatever. Just narrow it down, choose a bite-size thing, and then focus on that.

And then the second thing I would say is, think about yourself in a lot of different ways. Every average person has lots of hats. We are voters. We are taxpayers. We are donors. We are interlocutors; we have conversations with our kids and our partners. ... We’re buyers. ... If you think of yourself as, “I have six hats and in each of them I can do something small ... I’m going to do a little research and figure out what’s the better or worse shrimp to buy.” OK, that’s a little action as a consumer. ... If you just take it small and think of yourself in lots of different roles and try to do something small on your chosen thing, it can make a difference.