by Casey from Montvale

Three words to describe Elizabeth Glaser would be determined, dedicated and generous. She started a foundation for children with AIDS and raised $30 million for research to find a cure. She never gave up helping children, even though she was terminally ill.

Elizabeth Glaser got AIDS from a blood transfusion. She didn't realize she had this disease and unknowingly gave it to her daughter and son. When her daughter died in 1988, it influenced Elizabeth to find a cure. The first thing she did was to tell the United States President that there had to be much more research. When her letters went unanswered, Elizabeth figured out that he just didn't want to hear what she had to say. So, she took matters into her own hands.

Elizabeth started the Pediatric AIDS Foundation with her two close friends, Susan Delaurentis and Susie Zeegen. At the fundraiser, Elizabeth sat unidentified in a back room. Soon after that, supermarket tabloids were going to break their cover, so Elizabeth and her husband decided that they had to go public and explain the story themselves. Elizabeth shocked the country when she raised $30 million in five years. Then, on December 3, 1994, she died of AIDS.

In conclusion, Elizabeth Glaser was a great person. She never gave up, no matter how hard her life was. She was dedicated and determined to help children with AIDS. She also wanted children who were poor to be able to afford AIDS treatment. She will always be a hero to me because of how she put other people before herself, even though she was terminally ill. 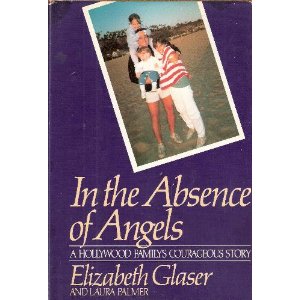 In the Absence of Angels: A Hollywood Family''s Courageous Story
Elizabeth Glaser and Laura Palmer