by Olivia from San Antonio

Emma Lazarus was born on July 22, 1849, in New York, New York. She was born to a Sephardic Jewish family. She learned many languages at an early age. Her first poetry book was Poems and Translations. It was published in 1867. It was praised by Ralph Waldo Emerson. Her next book was called, Admetus and Other Poems. It was dedicated to Ralph Waldo Emerson. Admetus and Other Poems was published in 1871.

In 1881, New York experienced massive growth with the immigration to the U.S. from Europe and Russia of thousands of persecuted Jews and other people seeking freedom and looking for a better way of life for their families. This was a difficult time for these refugees, so Emma Lazarus gathered her courage and took up their defense. She started to work very hard to try to help these immigrants. In 1882, Lazarus stared thinking about a poem which would become her most famous, The New Colossus. Little did she know that this poem would be on the Statue of Liberty.

Lazarus’ last book was a series of prose poems entitled, By the Waters of Babylon. It was published in 1887. On November 19, 1887, in New York City, Emma Lazarus died.

Not like the brazen giant of Greek fame
With conquering limbs astride from land to land;
Here at our sea-washed, sunset gates shall stand
A mighty woman with a torch, whose flame
Is the imprisoned lightning, and her name
Mother of Exiles. From her beacon-hand
Glows world-wide welcome; her mild eyes command
The air-bridged harbor that twin cities frame,
"Keep, ancient lands, your storied pomp!" cries she
With silent lips. "Give me your tired, your poor,
Your huddled masses yearning to breathe free,
The wretched refuse of your teeming shore,
Send these, the homeless, tempest-tost to me,
I lift my lamp beside the golden door!"

On their Web site, The Emma Lazarus Fund of the Open Society Institute explains:

"Emma Lazarus would not live to understand the full impact of what she had written. She died in 1884 after visiting France. It was not until 1901, that The New Colossus was added to a bronze plaque at the base of the statue. It was then that Liberty took on her more well-known purpose. Baring Emma's words, she (the Statue of Liberty) was born the "Mother of Exiles," calling out across the seas, the most famous immigrant herself, welcoming those from foreign lands to America, a land of freedom and hope."
******************* 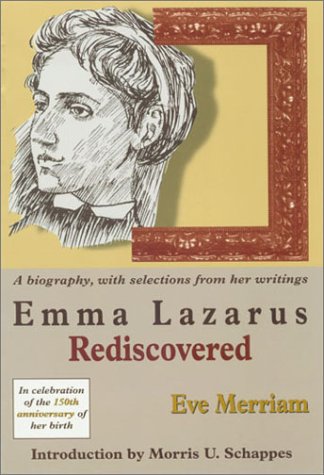