by Nikki F. from San Diego, California in United States

School is almost out. Only 20 minutes left. Then the fire alarm sounds, which is weird, because there was already a fire drill that day. But through the blaring alarm, there are people screaming, real screams, the ones that come from the mouths of people facing death, looking straight in its eyes. The next thing that's heard is popping, almost like someone is crushing chip bags. More screaming and people with terrified looks on their faces, frozen in fear. This was the day that changed the life of every single student, teacher, staff, and parent that had ties to Marjory Stoneman Douglas High School. Including one Emma González. González was a senior at MSD when a gunman decided to take the lives of 17 students and staff (Turkewitz, Julie, et al). Since February 14th, González, along with fellow classmates, have been the spokespeople for gun control, forming an organization called Never Again MSD, and they lead a march on March 24 in Washington D.C. called the March for Our Lives (Lerner). Starting an organization is no easy task, and neither is organizing a march that would be broadcast all over the country, and other parts of the world, especially after a traumatizing experience. But González stepped up. She pushed herself to the limits for the people that couldn't. Emma González was an ordinary senior in high school until a tragic event, but because of her bravery before and during the event, her leadership skills which she used to to organize events for her cause, and her determination to ensure that no one else goes through what she went through, she emerged a hero. 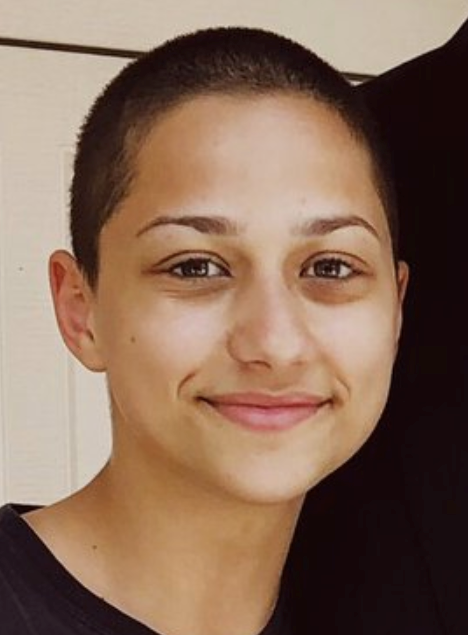 Emma GonzalezThe Office of Congressman Ted Deutch [Public domain]González’s actions during the shooting, when she showed calmness in an emergency, and after the shooting, when she and fellow classmates stepped up to speak for gun control, displayed bravery. Instead of panicking and breaking down, González decided to “[Hold] the hands of friends on either side of her, [and she] focused on keeping those around her calm as many began frantically searching the internet for any news that could explain what was unfolding on their campus” (Eller). It’s easy to panic in an emergency, and many people do panic. But when in an emergency, González cared about calming those around her, even though there was a shooter that could have killed them. She was brave enough to stay calm in an emergency where most other people would have been, “frantically searching the internet for any news.” But González also showed bravery after the shooting. She wrote an article for Teen Vogue magazine to raise awareness to her cause: "We Stoneman Douglas students may have woken up only recently from our sheltered lives to fight this fight, but we stand in solidarity with those who have struggled before us, and we will fight alongside them moving forward to enact change and make life survivable for all young people. People who have been fighting for this for too long, others who were never comfortable enough to openly talk about their experiences with gun violence, or still others who were never listened to when opening up about their experiences with gun violence or were afraid to speak out — these are the people we are fighting with and for" (González). González and the students that started the #Neveragain Movement are stepping up, into a space where they can be judged, called out, and physically hurt, to do what needs to be done. They want to stand up for the people that were afraid to or couldn't speak out and call for change. Gonzalez didn't stop there. During her famous “We Call BS” speech, she called out President Trump: "If the President wants to come up to me and tell me to my face that it was a terrible tragedy and how it should never have happened and maintain telling us how nothing is going to be done about it, I'm going to happily ask him how much money he received from the National Rifle Association… To every politician who is taking donations from the NRA, shame on you" (qt. Parkland Speaks). González, on National TV called out the President of the United States, and “every politician who is taking donations from the NRA.” She doesn't care who she is talking to, she is going to talk to them with passion and strength in her voice. She was brave enough to say what needed to be said to the strongest people in the country, and possibly the world. González has done many things that other people wouldn't be able to do, whether staying calm during a shooting or directly calling out the most powerful person in America. And when she did these things, she did them while wearing a brave face.

González organized events and marches, gave countless speeches and interviews, and formed an organization, all of which demonstrate her leadership skills. Claudia Eller wrote an article for Variety about González, saying, "She delivered an impassioned speech at a gun control rally in Fort Lauderdale… Her speech was broadcast nationally, and her name began trending on Twitter that afternoon. She created the @Emma4Change handle to promote stricter gun laws, and along with other Parkland survivors she founded March for Our Lives, a nonprofit, nonpartisan organization pushing for stricter gun laws and registering young voters" (Eller). Gonzalez stepped into the spotlight to ensure that things would change. She runs March for Our Lives, a nationally known organization, with other Parkland students. She gave a speech that all of America could hear, love her for, or hate her for. González took a leading position after the shooting, heading the cry for change. She along with fellow students organized interviews, events and a march that hundreds of thousands of people participated in. She created a organization that raised 3.5 million in the week following the attack. González knew that she had to take a stand: “I’m one of them. Fed up with the apathy pervading this country, we realized that we don't need to wait around to have our voices heard or for someone else to make change — we have to be the change we need to see” (González). Emma González is leading and organizing events, pulling attention to the problem they want solved. The “Parkland youth” aren't waiting for someone to change the world for them, they are changing it for themselves. González knew that people needed to rise up and fight for change after what had happened at her school, and she made sure that she would be one of those people.

González will not stop speaking her mind until what happened at her school wouldn't happen again, and that makes her determined. An article written by Claudia Eller eight months after the shooting highlights how determined González was to change gun laws: “Just three days after the massacre, González mustered remarkable resilience and courage when she transformed her anguish and heartbreak into unabashed activism” (Eller). González was determined to make sure that no one had to go through what she and her fellow classmates went through. If that meant using her time to speak in interviews and give speeches, she was going to do that. González dedicated time to change gun control shortly after the shooting: "In the days and weeks after the shooting, González made several high-profile public appearances, including a speech at the Broward County Courthouse in which she denounced U.S. President Donald Trump and other politicians for accepting campaign contributions from the National Rifle Association (NRA), a powerful pro-gun lobby group. González also participated in a televised town hall event on gun control legislation in the United States, which was hosted by CNN a week after the shooting" (“Emma González”). Emma González is making sure that her story is heard by people everywhere, so that they will stand up with her. She wants people to know that she isn't going to waste her opportunity to change the country. She isn't going to stop until the country is different. Determination is what changes the world, and González used her determination to make gun laws stricter. 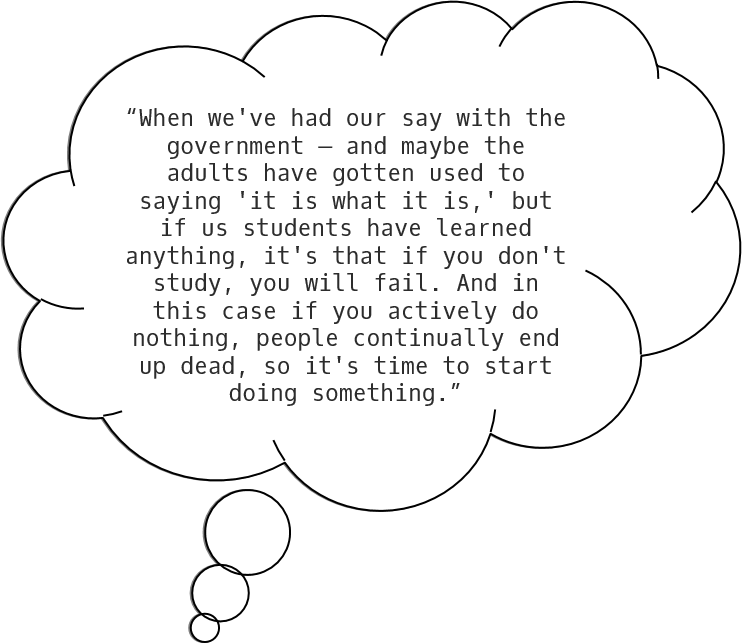 "Emma GonzalezNikki F.González showed bravery in the face of danger, leadership skills when needed the most, and determination when others gave up, and because of these traits, she is a hero. If González wasn't brave, then politicians wouldn't take her seriously or consider her a threat to the right to bear arms. If she wasn't a natural born leader, then not as many people would have heard of what happened to her school, and the government would have passed the shooting over and not thought of it as anything more. There may have not been a movement for stricter gun laws. And if González wasn't determined, then she would have been pushed to the side and be labeled as a kid that didn't know anything. She wouldn't have argued back or fought tooth and nail for what she believes in. But she is more than brave, a leader, and determined. She is inspirational. González once said during her passionate, powerful “We Call B.S.” speech, “Instead of worrying about our AP Gov chapter 16 test, we have to be studying our notes to make sure that our arguments based on politics and political history are watertight. The students at this school have been having debates on guns for what feels like our entire lives” (qt. in Parkland Speaks). González and other students are sacrificing their life to this cause, because no one else will. This subject is one that González feels strongly about, and she isn't going to stop fighting until things are different, and that’s admirable and inspirational. González was just 18 when a gunman took the lives of 17 people at her school. She was 18 when she decided the world needed to be changed, and she changed it. González showed that at no matter what age, anybody can make a difference to the world. Now imagine is those 20 minutes left in class had just passed, and nothing had happened. The students at Marjory Stoneman Douglas would have gone home and return the next day. Seventeen more people would have been alive, but more may have died. Gun laws never would have become stricter in the state of Florida, and instead of 17 people dying, it could have been 100s at the hands of someone else. But that could have happened if González didn't speak up.

Eller, Claudia, and Claudia Eller. “Emma González Opens Up About How Her Life Has

March For Our Lives - The organization founded by Gonzalez and other Parkland students.
A Young Activist’s Advice: Vote, Shave Your Head and Cry Whenever You Need To - A piece published on The New York Times written by Emma Gonzalez
What we know about Emma Gonzalez, the fiercely outspoken teen who stunned America with her silence - A collection of background information on Emma Gonzalez, published on CNN.com