Fauzia Minallah, a Pakistani artist dividing her time between Germany and Pakistan, frequently boards a train to a town of her choice for the day and then rides her bike into that town’s forest, which becomes her personal gallery. The fifty-eight-year-old chooses a tree and then uses a thin fishing wire to hang her installation—a tin foil sculpture she calls “Tin foil mother nature, protecting her tin foil children from massacre and rape.” She has collected the tin foil for over six years, mostly from the wrappings of Turkish doner kebabs, her son’s favorite food. She says, “This toxic aluminium, on organic, beautiful trees, it’s this contrast that interests me a lot. Because we live in a world of contrast, where toxic things are being sold as beauty, and in the process it’s destroying a beautiful mother earth.” 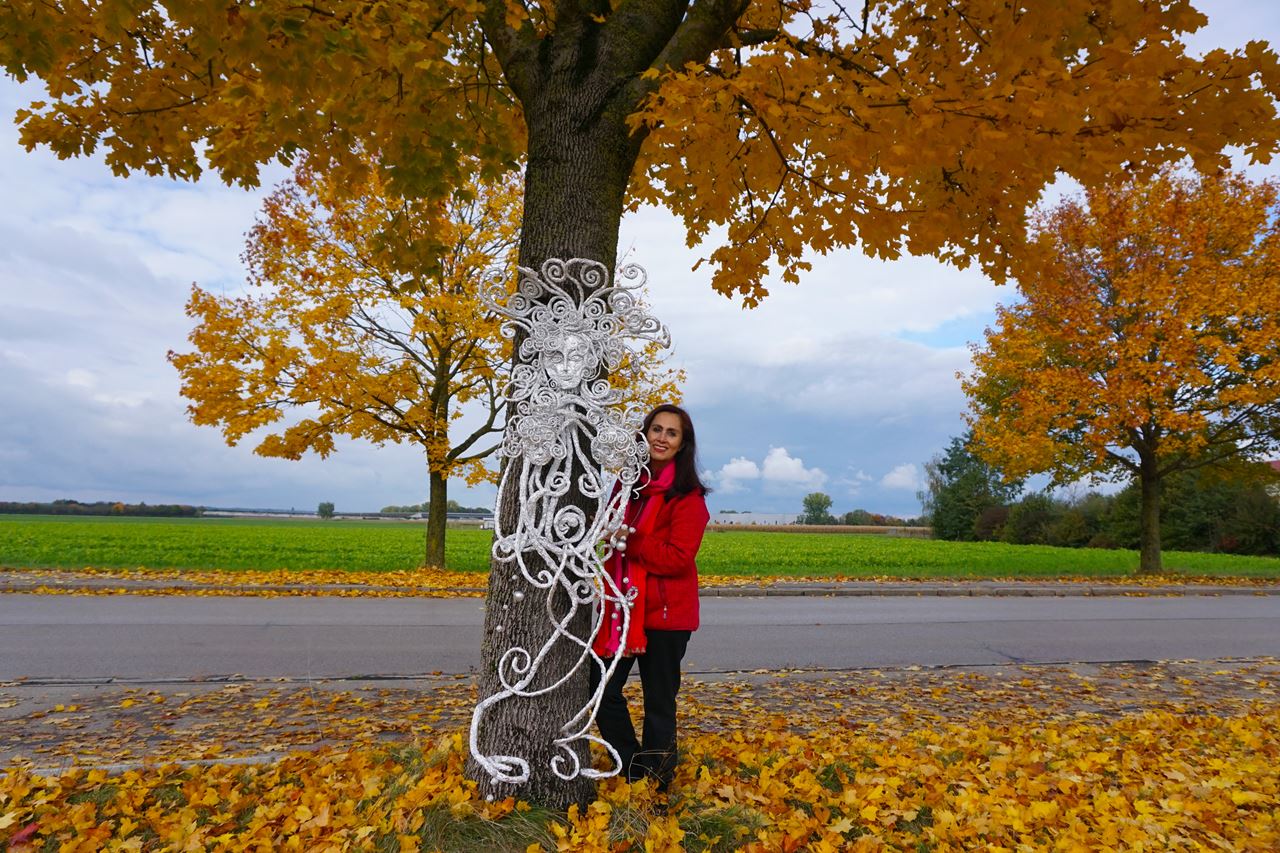 Fauzia is a sculptor, a painter, a graphic designer, a peacebuilder, and the founder of the Funkor Childart Centre in Islamabad. She has led art and storytelling workshops in such varying locales as London, Stockholm, Austria, Munich, and New Delhi, and her exhibitions have been shown in the Philippines, Germany, Istanbul, London, and Islamabad. In 2009, she won 3rd place in the Community category of the MY HERO International Film Festival, for her film “Iqra - Read (A Prayer for the Girls of Afghanistan and Pakistan).” In 2010, she won MY HERO’s Ron Kovic Peace Prize for “Let Them Bloom,” and in 2016, she won 1st place in the Animation category for “Amai’s Painting of of Peace.”

Fauzia’s passion for art started at an early age, fostered in large part by her father. Her parents were from the village Sirìkot and raised their children in Islamabad. Her parents grew up poor but had a thirst for education and progressive values. Fauzia’s father was an orphan at the age of twelve and achieved great heights on his own. Fauzia says, “I feel that I have evolved as a human being, but at lot of it has to do with the kind of parents I had in my life.” Fauzia had her first exhibition when she was only sixteen. Her father died a year later in a car accident at age forty-five. While he wasn’t able to see his daughter become an artist, Fauzia believes that he set her career in motion, perhaps with a second sight that he might not be around to see its fruition. Fauzia says, “The kind of father that he was, it stayed with me and my siblings for the rest of our lives because he left beautiful memories with us. The presence of a single woman in almost all of my paintings is an ode to single parents like my mother. After my father's death she was a pillar of strength for me and my siblings. She was not only a mother but father too.” 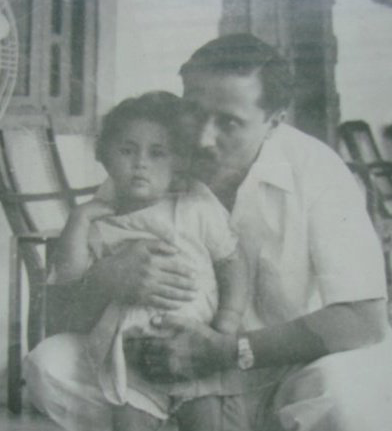 Fauzia with her fatherPhoto courtesy of Fauzia Minallah 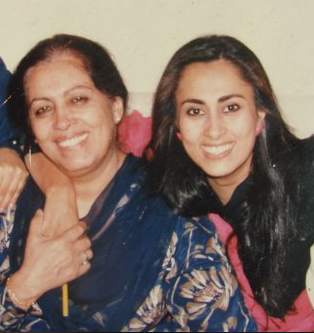 Fauzia with her motherPhoto courtesy of Fauzia Minallah

Fauzia felt lost after her father died. She didn’t want to leave for another city to attend an art college, so she got her degree in international relations. That course of study, however, gave her a useful foundation in politics: “When you know about the politics, then you are more aware of what the world really needs as far as peace is concerned.” She spent time as a political cartoonist for a newspaper in Islamabad, drawing cartoons about her country’s dictator, before receiving a scholarship to attend Pratt Institute in New York, where she graduated with a master’s in communication design. New York City shaped Fauzia’s worldview, as she was surrounded by people from various religions and of various races and ethnicities. She says, “I really want to interact with people who are different from my culture, who are different from my religion, so maybe that [living in New York] was a start of peacebuilding. Of knowing the world, of going out of your comfort zones and reaching out to people who are different from you.”

In 2011, Fauzia collaborated with fellow artivist Joanne Tawfilis to create a mural in a shantytown of Islamabad, featuring children in multi-religious harmony.

The mural was made from cotton cloth of different colors and put together like a jigsaw puzzle by the children of the shantytown. “I come from a majority of Pakistan,” she says, “so I felt that it’s my duty to go to the children who are from minority communities and who face a lot of discrimination. In this small way, I can tell them, through art, that I respect your religion as much as I respect my own.” The MY HERO Project honored Fauzia and Joanne at the MY HERO International Film Festival in 2010, where Fauzia was awarded the Ron Kovic Peace Prize for her film “Let Them Bloom,” which documented Afghan refugee children in another shantytown in Islamabad painting a mural of peace.

Fauzia says that in Pakistan, art is a luxury. Only a small minority of students, who attend private schools, are given art lessons. So she takes her paints into the shantytowns to make art with the children. “As an artist, I felt that it is my duty to provide something that had given joy to me as a child.” Asian Network of Trust, an organization in Hiroshima, publishes Fauzia’s children’s books free of charge. She leads storytelling workshops and gives picture books to children who can’t afford them in Pakistan, as picture books are also a luxury there.

In 2009, Fauzia helped create Amai Park, a playground for visually impaired children at the Al Maktoom Centre for the Visually Handicapped in Islamabad. It was the first such playground in Pakistan, and the city government gave them special slides and swings. The park is named for Fauzia’s ‘Amai’ cartoon character. Blind children eagerly came to the park each day to see if it was ready: “Even five-year-old blind children, three of them will be coming, holding hands,” she says, “and the one who can see more is helping the other two. At such a young age they start to help each other. There is so much beauty if you just sit there and watch them, how the survive with their own special abilities.

Fauzia helped them paint surfaces with flower designs. She had come to discover that many blind children can see color from a distance of about one to three inches. During her time volunteering at the center, she remembers in particular a special experience with a child: “A child that I thought was blind, when I gave her colors, and from a distance of about one inch, she could tell me exactly what color it was. That was an amazing experience for me. And then making her draw for the first time in her life, she drew eyes, nose, mouth, and the whole face, and that was amazing because she had never, ever done that before.” She says that was the children’s first time holding a pen and brush and colors. 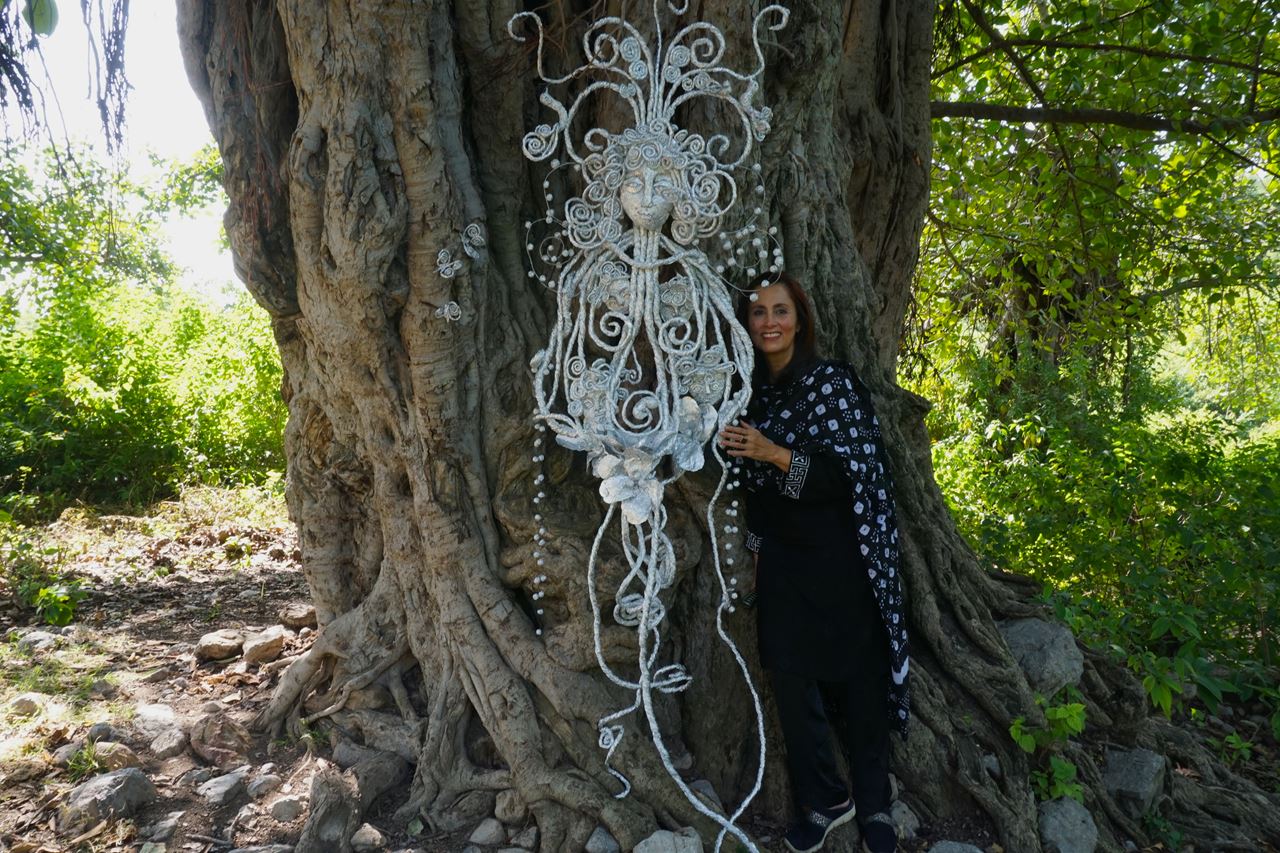 During her time in Islamabad, before moving to Germany, Fauzia also worked to protect the trees there. She wrote the book “Glimpses Into Islamabad’s Soul,” a tourist guide meant to display the unique history of Islamabad’s structures and topography. Her efforts helped protect five old trees as natural monuments; for one tree, the road had to curve in order to save it. “Human beings are the only species in the world that have insatiable greed,” she says. “Not just in one country, but at every level in every country, the 1% is destroying the whole resources of that country. Not only are we consuming food; we’re consuming rivers, and trees, and forests.” Fauzia focuses her artistic impact on treading lightly on the earth, connecting man to nature in a way that shows nature as a living, breathing being. Her films, art, and installations exude peace and tranquility. She says, “I think we have to live our lives—whether we are artists, whether we are CEOs—we have to live our life that is good for the environment, and very aware of what challenges we’re going to face as far as climate change is concerned.”