Finding the heart of a people’s resistance 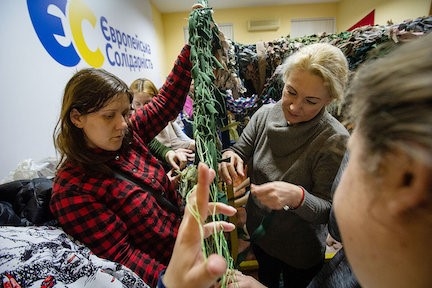 After strong early reporting by Martin Kuz from Kyiv and Lviv, the Monitor now has another reporter inside Ukraine: London-based Scott Peterson, a former Moscow bureau chief with significant conflict-zone experience in Africa, Europe, the Middle East, and Afghanistan.

Scott walked into western Ukraine from Poland last week, in an authorized crossing, and then traveled by overnight train to the Black Sea port of Odessa, where I reached him yesterday amid reports that the city, west of embattled Kherson and Mariupol, may soon be the target of a Russian assault.

“From the outside it looks like things are so inevitable,” Scott says, given Russia’s military might. “But I have been surprised at the level of desire to resist on the part of the Ukrainians.” (See his story, below.)

In Odessa, “they have pulled together, and that has helped them to kind of calm the fear, calm the panic, [to] feel like they’re doing something constructive.

“I’ve seen sandbag-production lines where people are digging up Black Sea sand to put in sandbags,” Scott says. “Even kids are doing this. I’ve seen ... people buying construction-grade girders and having them cut up in metal shops so that their friends can weld them into tank traps. ... [Saturday] night I was in a small apartment [and saw] men and women weaving camouflage nets for the military just using scraps of cloth and fishing net.”

Though Odessa is a city with a reputation for being one of the most pro-Russian in Ukraine, Scott says, none of the Russian speakers he has met has expressed a need to be “liberated.”

“People resent the fact that their lives have been turned upside down for no reason,” Scott says. They’re troubled by signs that friends and family in Russia are being “turned into zombies” by Russian propaganda. Still, Scott sees signs of heart, and hopefulness.

“All of these people are saying, ‘We will find a way,’” he says. “Their view is not [just accepting] that Russia has overwhelming military force. They’re looking at it more like, ‘What force could possibly overcome the desire of 44 million Ukrainians not to be under Russian control?’”

This article appeared in the March 07, 2022 edition of the Monitor Daily.