For Black LGBTQ Christians, storytelling is a tool of resilience 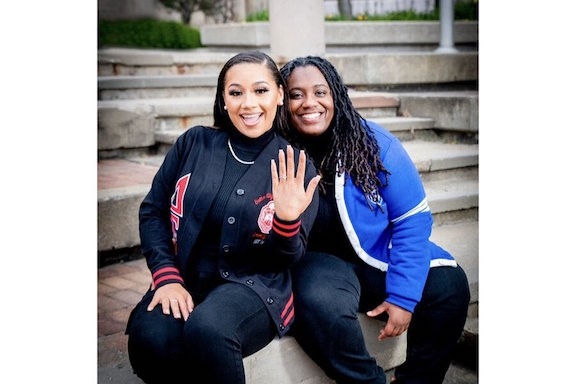 Kambriana Gates (left) and Terria Crank have photos taken for announcing their engagement in Grand Rapids, Michigan, last year. Together, they are rekindling their faith and reconnecting with church.Kawan Mills/Courtesy of Terria Crank

Terria Crank had grown tired. She was tired of hiding her sexuality, of running around with fake boyfriends and keeping secrets from her mom. She was attending church three times a week but wondered if God could even see her. So, at 19 years old, she left the faith.

Years later, her girlfriend – now fiancée – led her back.

“It was honestly Kam who reminded me of God’s love,” she says. “She stopped me from fully walking away. She reminded me that it’s about relationships and not about rules.”

It’s not easy being out in the Black church. None of the seven religious denominations that historically make up the Black church are queer-affirming, but LGBTQ people still exist in these spaces, often quietly. Their experiences challenge the long-held notion that Christian and LGBTQ communities are inherently and irreconcilably at odds. Today, this deeply ingrained narrative makes it difficult for Black congregations – even those whose members largely support LGBTQ equality – to recognize these congregants in their midst.

By sharing their stories, a growing number of Black, queer Christians are fighting for recognition of their own spirituality, as well as creating new opportunities for community building and individual catharsis.

“In some ways, the opposite of resilience is fatigue,” says Don Abram, founder of the Chicago-based Pride in the Pews project, one organization striving to bring LGBTQ people of faith together. “And there are a lot of folks I’ve been in conversation with who have expressed relief, have expressed feeling revived by the opportunity to share their story.”

Despite common “culture war” narratives that pit LGBTQ and religious groups against one another, these communities frequently intersect.

“[Queer people] are religious,” says Rachel M. Schmitz, an Oklahoma State University professor who researches LGBTQ resistance and resilience. “People’s experiences in that overlap tend to get overlooked because we just want this easier, neater explanation.”

Simply chronicling people’s experiences can be powerful. In various studies, participants “all say that it’s affirming to be listened to, to get their voices out and maybe help somebody else down the road,” says Dr. Schmitz. “It’s like a form of advocacy and giving back.”

There are also far more churchgoing allies of LGBTQ congregants than people believe, says Victoria Kirby York, deputy executive director of the National Black Justice Coalition, who uses she and they pronouns. 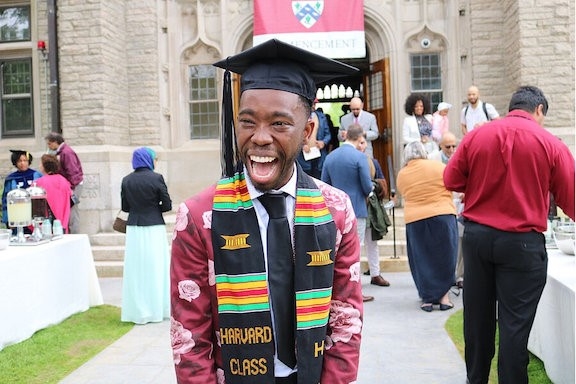 Brianna Lawrence/Courtesy of Don AbramDon Abram graduates from Harvard Divinity School in Cambridge, Massachusetts, in June 2019. This is where he met classmate Karl Bandtel, who would later help fund Pride in the Pews.

In her two decades of organizing, Mrs. Kirby York often worked with pastors who personally supported LGBTQ rights but wouldn’t take a public stance for fear of splitting their congregation. Meanwhile, studies by the Public Religion Research Institute have shown that a strong majority of people in nearly all major religious denominations support same-sex marriage or laws protecting LGBTQ people from discrimination. Among Black Protestants, 86% now support anti-discrimination laws, up from 64% in 2015.

“People of faith who are affirming of LGBTQ people were not as loud as our opposition,” she says. “We’re sitting in pews at church, essentially thinking everyone around us are homophobic and transphobic. … And turns out 7 out of the 10 people in the pew are right along with you.”

If that kind of support existed in Mr. Abram’s childhood church, he couldn’t see it.

Growing up in South Side Chicago, he faithfully served as a junior deacon, usher, and choir member at the Greater New Mount Eagle Missionary Baptist Church before he began preaching at age 14. By 17, his rousing sermons landed him on the front page of the Chicago Tribune.

Mr. Abram felt celebrated, beloved, and afraid. The local phenom worried he’d lose everything if the pastor discovered he liked boys more than girls, so he kept that part of himself a secret for years.

It wasn’t until he entered Harvard Divinity School in Cambridge, Massachusetts, that Mr. Abram came to embrace his full identity as a self-described “queer church boy.” This is also where he met part-time student Karl Bandtel, whose philanthropic foundation would later provide seed money for the Pride in the Pews project.

The power of storytelling

In the year since starting Pride in the Pews, Mr. Abram has interviewed people from across the country, ages 22 to 85, each with a unique relationship with the Black church. Driven by a deep love for both the Gospel and the Black church’s legacy of social justice, Mr. Abram aims to mine their stories for insights that can help congregations become more welcoming toward LGBTQ members.

Among the early participants – found mainly through social media ads and word of mouth – was Ms. Crank; her fiancée, Kambriana Gates; and Jonathan Allsop, a first-generation American who grew up a Seventh-day Adventist.

To Mr. Allsop, the Black church is about a unique culture of worship. “There’s this unspoken rule that you are allowed to be free and vocal in your spirituality,” says Mr. Allsop, who no longer attends church regularly. “When someone is singing, you can stand up and engage yourself in a way that I don’t see in a lot of other churches.”

After coming out, he tried attending multicultural churches that were LGBTQ-affirming. But none came close to this worship style, and in Mr. Allsop’s view, they failed to address issues of racism head-on. Yet the Black church’s focus on racism was also a source of frustration when he faced homophobia from church members. 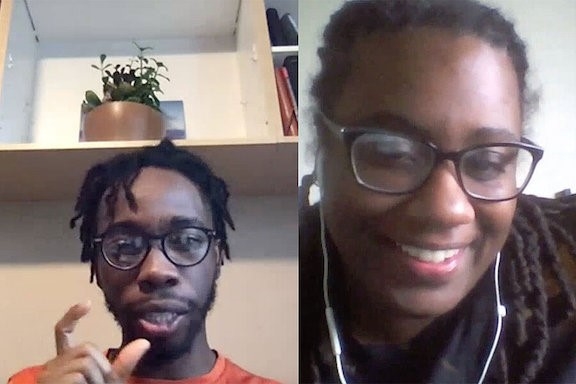 Courtesy of Pride in the PewsDon Abram and Terria Crank discuss their experiences as Black, queer Christians during her interview with Pride in the Pews in March 2020. Ms. Crank says it was the first time she’s been asked to sit down and reflect on her journey as a gay woman in the Black church.

“You don’t want to take the time to understand me, but you want people to take time to understand you,” he says. “That [hypocrisy] makes it very difficult for me to not be angry. And I think one day, maybe after I’m 30 and I’m a little more settled in life, I’ll be able to take that anger into something more constructive. But for right now, it’s really just a lot of anger.”

Over the holidays, Pride in the Pews reached its initial goal of 66 interviews – chosen for the 66 books in the Bible – with no plans of stopping. The group has also secured $50,000 from the Gill Foundation to continue its work, and Mr. Abram hopes to use some of that money to partner with the African Methodist Episcopal Church’s sexual ethics discernment committee, which has been tasked in part with hearing testimonies from LGBTQ church members.

The project isn’t really about changing people’s minds, he says. “It is simply an invitation to be in conversation. And I just believe that if they’re willing to hear, there’s no way they won’t be transformed by the stories of Black queer and trans folks.”

That transformation works both ways. Ms. Crank says her interview with Mr. Abram compelled her to officially enroll in Emory University’s divinity program.

“I was very afraid that I was going to get a ‘no’,” Ms. Crank says about the application process, “because I was so accustomed to ‘no’ to being who you are.”

Many of the schools that initially interested Ms. Crank had social contracts that her relationship automatically violated, and several church leaders declined to write her a recommendation letter for the Emory program. She sought advice from the school’s dean of admissions, explaining her struggle with building church relationships as an openly gay woman. They allowed her best friend from undergrad to write the letter, and shortly after, Ms. Crank was accepted with a three-year scholarship.

The news moved her to tears, she says. “That was the first time I was truly honest with anybody about where I was in this journey [of reconciling my LGBTQ and Christian identities], and they just accepted me with open arms.”

At age 14, right as Ms. Crank was noticing her attractions to women, she and her mom switched to an overtly anti-LGBTQ Pentecostal church in Detroit. At 15, she started tarrying. While other teens struggled to receive the gift of tongues, Ms. Crank felt the Holy Ghost coursing through her and says she could “shanana” with the best of them. By 17, she found herself immersed in a double life, attending church several times a week and publicly dating boys, all while texting girls on the side.

These worlds collided when she was 19. During an annual youth retreat, the pastor looked out at the crowd and announced that someone in the room was a lesbian, and they were going to pray the gay out of them. Ms. Crank felt a sudden rush of shame. This is it, she thought, they know.

She stepped down to receive the prayer. The crowd laid their hands on her, dancing and shouting as Ms. Crank sat quietly on the steps.

She didn’t feel the Holy Ghost that day.

The moment triggered a pendulum effect in Ms. Crank’s life, with the young college student swinging from one extreme to another. First, she quit church and embraced what she describes as “a toxic form of masculinity,” dating several women and partying constantly. Within a year, she was getting baptized, leading Bible study, and trying to “act straight.”

After graduating, she met Ms. Gates, and that pendulum began to steady. The women bonded over Bible verses and discussions about faith, and as their feelings for one another grew, Ms. Crank was forced to reconcile her Christian and LGBTQ identities. In 2018, she wanted to leave the church, but through prayer and intense conversations with Ms. Gates, she chose to stay.

Now, they’re navigating the next chapter of the journey together – being an openly queer couple in the Black church. Their goal of finding a welcoming congregation where they’re allowed to serve is proving a challenge.

“When I decided to come back into the church, I was excited to just be at one church, serving,” says Ms. Crank, who loves engaging with ministry. “We will listen to this sermon and listen to these songs and let it hit our soul for our personal relationships with God. But I still think community is so important and it is missing in our life right now.”

Whenever she feels the weight of school, family rejection, or that familiar sting of “church hurt,” she considers how life might’ve been different if she saw someone like herself in the pews. Many young LGBTQ people are at higher risk of suicide than their peers, Ms. Crank points out.