by Fiona Hastings from San Diego, California in United States 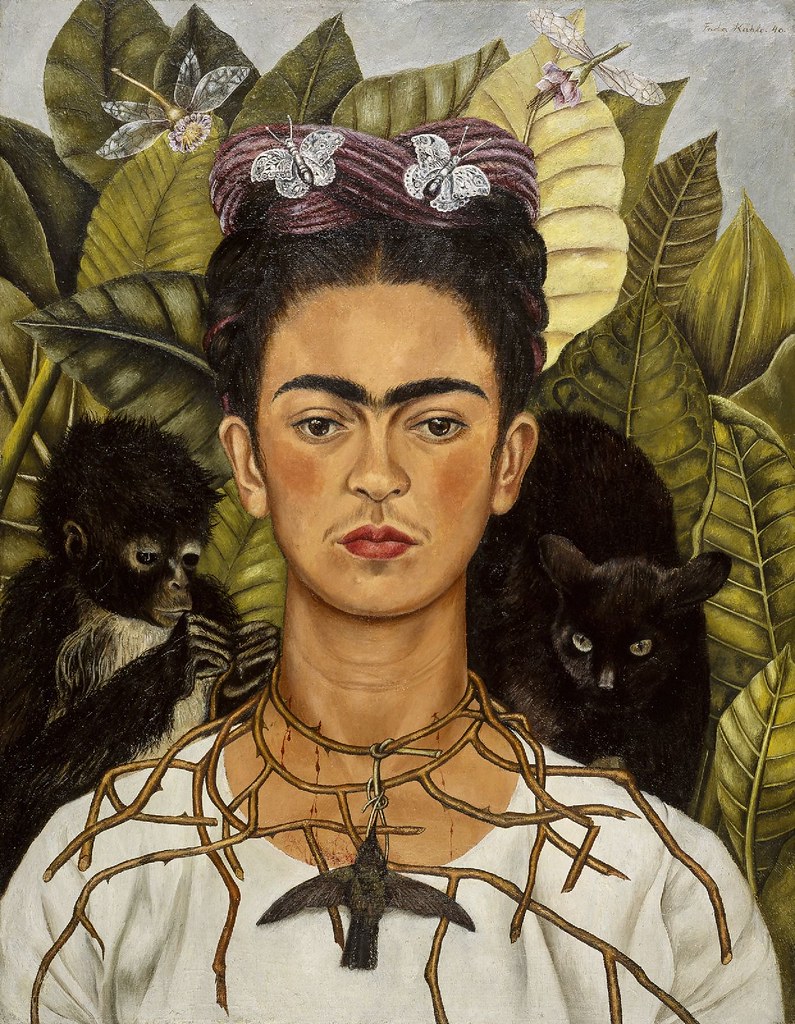 Self-Portrait
Frida Kahlo / CC BY 2.0 via Flickr“She was a human being, a woman, daughter, sister and wife. Such was the constancy of her pain that she ‘lived dying,’ according to one friend. But she was also, astonishingly - and despite many cruel betrayals - in love with life” (Smee). This quote explains the fullness and integrity of Frida Kahlo’s view on life. Magdalena Carmen Frida Kahlo y Calderón was born on July 6, 1907 in Coyoacán, Mexico City, Mexico. She lived in her unique and colorful house, La Caza Azul, with her religious mother and her German father. Because of her extreme religiousness, outbursts and fanaticism, Frida’s mother caused her to have an emotionally disturbed childhood. Adding onto her trauma, at the age of six Frida Kahlo contracted polio leaving her permanently disabled. In 1925 she and her boyfriend almost died in a horrible train crash, disabling her even further. Despite being almost paralysed, Kahlo actively had outlooks on communism in Mexico and other politics involving feminism. She married famous muralist Diego Rivera, who inspired and pushed her to focus more on art. Frida Kahlo possess the traits of courage and a recellience for facing internal and external hardships. Frida Kahlo proved she was a hero through her rebelliousness when she stood for her rights and bravery while suffering many ailments.

Frida Kahlo had a highly rebellious personality that made her speak out for what she believed in and her view on different kinds of politics. During Frida Kahlo’s life she accomplished many great things but, “She is also remembered for her strong political and social stances. Kahlo was an outspoken Communist with deep personal ties to the Mexican Revolution (1910–1920)” (Frida Kahlo in Popular Culture). During the 1930s, society portrayed the message that women were not as relevant as men. When women would speak out, society saw their opinions as invalid or unimportant. Frida Kahlo expressed her ideas and opinions, which were grounded in her Mexican roots, and her personal ties to different political viewpoints to the public. Speaking out was unlikely for a woman to do so, but Frida Kahlo’s rebellious personality pushed the social standards and went beyond. Being the rebel she is, she went above standards when, “She played soccer, went swimming, and even did wrestle, which is very unusual at that time for a girl” (Frida Kahlo Biography). Frida Kahlo played sports that rebelled against the system of her time. Her participation was not common for a woman to do in her time. Kahlo didn’t care for the opinions of society, which pushed her to rebel against her time era. Through her actions, she proved to the world that women can do anything they desired. With all of her actions in politics and social standards, Frida Kahlo was a rebellious figure.

Frida Kahlo utilized her weaknesses from her ailments and other obstacles to prove herself as a brave person who can overcome almost everything. During her younger years, Frida Kahlo learned how to cope through her polio when, “Her 6-year-old self invented an imaginary companion to help her cope. And this, as Gannit Ankori notes in a 2013 biography, marks the beginnings of Kahlo's "splitting" of herself, a common psychological response to trauma and pain, which later stimulated her self-portraiture” (Smee). At 6 years old, usually a little kid would not do anything to help their pain but complain and suffer. Instead of  ignoring her suffering, Kahlo took a step back and tried to help herself so she would not be alone in easing her trauma. She embraced that she would never be the same or perfect. Her coping mechanisms involved a lot of bravery to stand up to herself using psychological methods, therefore using a great amount of emotional strength. In Frida Kahlo’s time of new ideas and opinions, “Interest in the late artist first began to take hold again in the 1970s as she was gradually adopted by the LGBTQ community as a heroic figure who symbolized the right to affirm one’s identity” (Frida Kahlo in Popular Culture). While Kahlo was alive, being a member of the LGBTQ+ community was not commonly discussed. To be a member who was part of that community took a lot of bravery to stand up to hate and hurtful opinions. Kahlo was a hero for members who were part of the LGBTQ+ community, helping them feel that they were not alone. After Frida Kahlo’s big train accident she greatly suffered but “During her recovery, she decided to focus full time on art. She also began to meditate on existential questions related to identity, trauma, and death” (“Frida Kahlo”). As a brave woman, Frida Kahlo continued to do the things she loved while recovering from her life-threatening injuries. To maintain the motivation to focus on other things than pain takes a lot of courage, which Frida Kahlo showed. Broken with trauma on the inside and physically on the outside, she used art as one of her coping methods, which lead her to many successes in her life. As a heroic figure who stood up for herself and her rights, Frida Kahlo proved herself as brave. 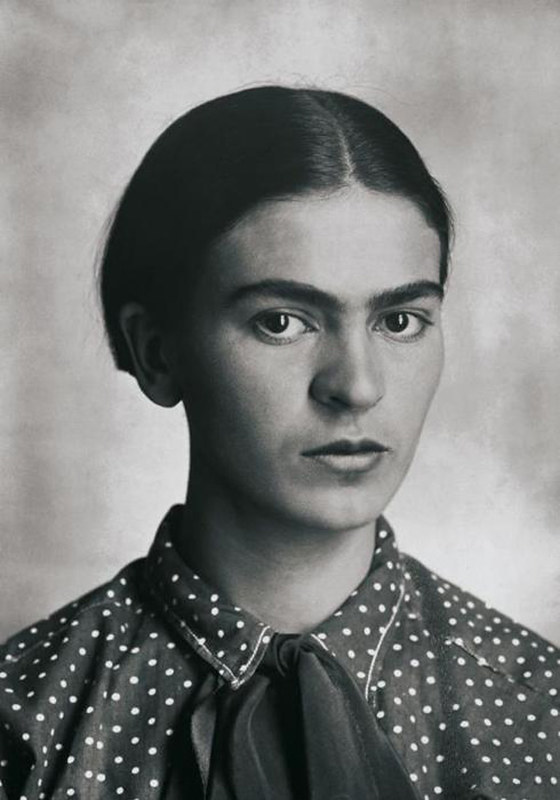 Frida Kahlo
Guillermo Kahlo / Public Domain via FlickrBecause of Kahlo’s bravery and rebelliousness, she pushed limits on different kinds of problems and society’s standards. Frida Kahlo took many falls throughout her life, but she managed to pick herself right back up. Her suffering and pain pushed her to create beautiful pieces of art that portrayed different messages while she was on the longest road to recovery, and eventually becoming one of the most famous artists all time. From a young age, Frida Kahlo had the motivation to continue living her life in the best ways possible. Apart from her accidents, Frida Kahlo was brave enough to stand tall as a figure for the LGBTQ+ community. She gave others a message that being who you are shouldn't be something to be ashamed of. Adding on, being a bisexual woman in her time gave her a huge minority. Her rebelliousness caused her to do things women would unlikely do, like play sports and speak out on politics. Frida Kahlo showed traits of resilience, strength, courage, bravery, and rebelliousness. In our world today, people are suffering more than ever from different kinds of discrimination and self doubt. Many don’t know the story of Frida Kahlo and the pain she endured, which can impact how bad people’s situations and views are. She was a strong woman who was unable to move around like she used to, but she still found a way to enjoy what she liked to do and live her life. This inspires me to never give up on anything and not let different obstacles be an excuse to make me suffer. As Kahlo said, “ ‘Feet, what do I need you for when I have wings to fly?’ -Frida Kahlo” (fridakahlo.org). In her quote, she expresses she cannot move, but she can use her “wings” to navigate through life and enjoy it nonetheless. Frida Kahlo inspires me to love life, be strong, and brave. Because of her ability to fight her pain and society and still view life as a gift, Frida Kahlo embodies the true definition of a hero.

Biopic of the bold and controversial life of artist Frida Kahlo. Set in Mexico City, this visually evocative film traces her lifelong, tempestuous relationship with her mentor, along with her illicit affairs with Trotsky and various women. Her forward-thinking artistic, political and sexual attitudes are explored as we witness a hard-drinking, passionate woman of the early 1900s, which earned an Oscar nomination for Salma Hayek.

Museo Frida Kahlo - "La Casa Azul" that Frida Kahlo lived in is now a museum where people can visit and take a tour throughout the rooms. Tickets can be purchased, and a digital tour can be accessed of the museum.
Frida Kahlo teh complete works - A short summary of Frida Kahlo's life is provided, as well as many of her pieces of artworks. There is information provided that describes each of her paintings.
Frida Kahlo Corporation - A blog, shop, gallery, etc pages are provided for the viewer. Also, its shows how her art is shown in the world of today.

Self-portrait with Thorn Necklace and Hummingbird by Frida Kahlo